Morgan Stanley advised on $219 billion of mergers and acquisitions worldwide in the first quarter of 2009, beating out J.P. Morgan’s $203 billion total to take the lead in Thomson Reuters’ rankings of top financial advisers. Each firm advised on 70 deals announced in the first three months of this year.

Despite its strong start in investment banking, Morgan Stanley will have a difficult year in 2009, CEO John Mack told employees in a nationwide conference call on March 30. He cited the large amount of toxic assets that Morgan Stanley and other Wall Street firms still have to purge from their holdings.

Citi, Goldman Sachs and Deutsche Bank, in that order, rounded out the top five financial advisers on worldwide announced deals in the first quarter. The total volume of deals in the quarter was $473 billion, a decline of 29% from the same period a year earlier and the lowest three-month total since the third quarter of 2004, according to Thomson Reuters.

Boosted by a pair of major mergers in the pharmaceuticals industry, the United States bucked the worldwide trend and registered an increase of 10% in deal activity in the first quarter. M&A; activity in Europe, the Middle East and Africa declined 48% from the year-earlier period, while deals announced in the Asia-Pacific region fell by 34%.

The two biggest deals announced worldwide in the first quarter were Pfizer’s $64 billion acquisition of rival Wyeth and Merck’s $46 billion merger with Schering-Plough. The pharmaceutical industry is consolidating in the face of growing competition from generic drugs, as the big companies in the industry lose their patent protection on blockbuster drugs they developed.

Fees for M&A; financial advisory assignments completed in the first quarter fell by more than 60% from the same period a year earlier to $3.8 billion, according to estimates by Thomson Reuters and Freeman. Goldman Sachs led with $295 million of imputed fees, followed by Morgan Stanley, with $214 million.

With limited access to the global credit markets, private equity firms were involved in far fewer mergers in the first three months of 2009. First-quarter volume for leveraged buyouts totaled $16 billion, the lowest since the fourth quarter of 2001.
Meanwhile, Ernst & Young released a survey of 360 senior executives at major corporations worldwide showing that more than half are more likely to consider divestments of non-core businesses due to the current economic and financial environment. The market will be buyer-driven for the foreseeable future, with an expanding range of buyers, including those based in emerging markets, sovereign wealth funds and governments, the survey found.

“Historically, divesting skills have been under-developed relative to acquisition skills, yet clearly they need to be enhanced now,” says Jeffrey Greene, Americas sell-side markets leader at Ernst & Young. Large corporations anticipate that divesting will require working creatively with the buyer on sales processes, deal structures and funding arrangements, he says. 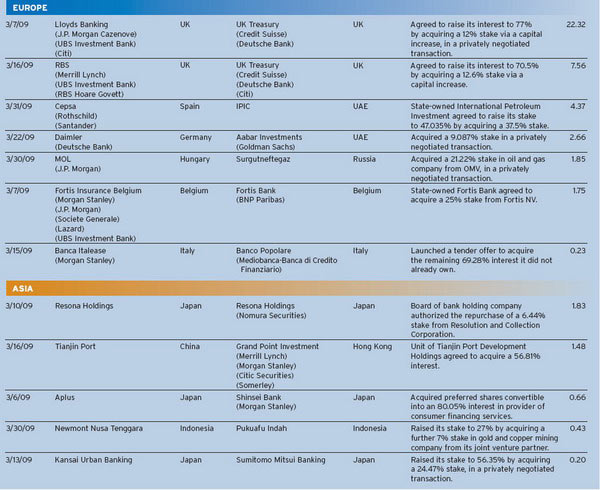