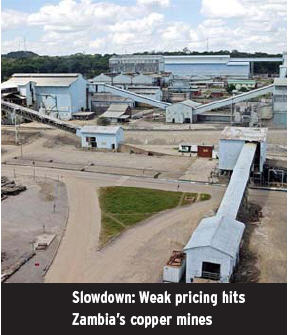 South Africa’s Standard Bank, Africa’s largest lender by assets, has become the first international financial institution to join the IFC’s $5 billion global trade liquidity program. The program aims to extend loans to regional banks for on-lending to importers and exporters in developing nations. The IFC extended a $400 million loan to Standard under the program to support trade in sub-Saharan Africa. The IFC also plans to nearly double its agribusiness sector investments in Africa this year to $200 million from 2008’s $116 million.

Ghana plans to open a commodities exchange next year. The bourse, set to open in either Accra or Kumasi, aims to stabilize escalating food prices, which pushed annualized inflation to a five-year high of 20.3% in February. The World Bank funded a year-long feasibility study for the project, completed in April. The exchange will focus on trading such basic food staples as corn, rice and soybeans.

Nigerian finance minister Remi Babalola has called on the nation’s state governments to curb spending and reprioritize capital projects to focus on infrastructure investments. The federal government has reduced allocations to state administrations by more than 34%. The situation forces states to seek or maintain revenue sources of their own.

The Bank of Zambia has indefinitely shelved plans to secure a sovereign credit rating to help local companies seek foreign financing. The government had not announced intentions of using the rating to tap international capital markets itself. Analysts speculate the reversal may have been prompted by the country’s deteriorating economy, which was likely to garner an unfavorable rating. With copper prices remaining weak, the Zambian economy is expected to contract by 1% this year.