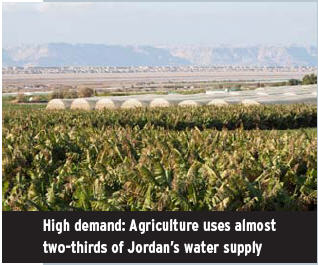 The real liquidity crisis in the Middle East, as well as in parts of Asia and Africa, is the shortage of water, according to a report by Standard Chartered Bank. Consumption of fresh water must be strictly limited to the most productive uses, it says. Since 1,000 tons of water is required to produce one ton of grain, countries in water-scarce regions should increase imports of “virtual” water in the form of food, the report says. This would allow specialization and the most efficient use of global water resources.

Jordan has a severe water shortage, and yet water for agricultural use is subsidized, Standard Chartered says. Agriculture uses 65% of the country’s total water supply but contributes only 2.5% of gross domestic product. The Jordan Engineers Association (JEA) convened a meeting of water experts in Amman on March 22 to mark World Water Day, amid concerns about dwindling groundwater reserves. The engineers called for greater use of grey water, also known as sullage, which is non-industrial wastewater from washing dishes and bathing.

The construction of a desalination plant to provide water to the capital would be the ideal solution to Jordan’s chronic water scarcity, according to the JEA. It supports an international project to pump water from the Red Sea to save the Dead Sea, which has been drying up due to the diversion of water to the Jordan River for agricultural and industrial use.

In recent years foreign investors from the Middle East and China have purchased and leased land in Africa to grow crops for export to their home countries. Saudi Arabia has begun reducing purchases of wheat from local farmers. The kingdom plans to import all of its wheat by 2016, ending a 30-year program to make it self-sufficient in wheat supplies. However, Saudi Arabia continues to export potatoes to neighboring Gulf countries.

The current economic turmoil and fiscal stimulus provide a great opportunity to tackle water-related problems, according to Standard Chartered. Desalination is capital-intensive and energy-intensive, it says, but there is no shortage of salt water.