Many of Europe’s former star economies are still struggling to find their feet after falling prey to the credit crunch. 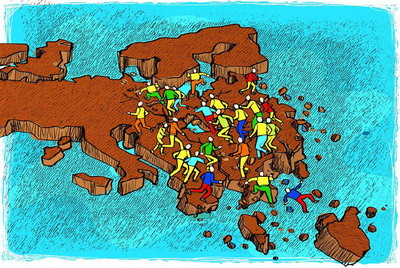 Emerging Europe is on the edge of a precipice. Already a number of countries, including Romania and Serbia by the end of March, have sought assistance from the International Monetary Fund, and others will follow. What was taken as economic convergence with Western Europe in recent years has in many instances been revealed to be an unsustainable spending binge fueled by cheap credit and encouraged by reckless governments.

The reversal of fortune that these formerly dynamic economies have experienced is so dramatic that many fear emerging Europe could face serious social and political upheaval—both in the region and, potentially, across the European Union. Already, governments in the Czech Republic, Hungary and Latvia have fallen as a result of the economic crisis. At the same time there are hopes that Western Europe will act to save its Eastern neighbors—and potentially bind Europe closer together.

“This is the biggest crisis in CEE in the post-communist period,” says Nigel Rendell, senior emerging markets strategist at RBC Capital Markets in London. “In many ways it follows the crises of Latin America in the early 1990s and Asia in the late 1990s. Now it’s CEE’s turn, and the causes of the current problems are surprisingly similar to those that caused earlier emerging markets crises.”

In short, there was an assumption in Central and Eastern Europe that the good times would never end, and consumers, corporates and governments behaved accordingly—with dire results. “Some CEE countries were clearly overheated and overspent and had growing current account deficits before the credit crisis,” notes Karine Hirn, partner and co-founder of East Capital in Stockholm. “When liquidity disappeared, they collapsed.”

CEE’s pain looks set to last longer and be deeper than that in many other regions. While, in GDP terms, private sector debt is not extreme, much of it is in foreign currencies, including as much as 80% of mortgage borrowing in some countries. In addition, many of CEE’s economies are very open: The exports-to-GDP ratios of Hungary and the Czech Republic are around 80% compared with 25% for the United Kingdom. Consequently, they are dependent on external growth, which will be absent in the immediate future. Moreover, with large budget deficits and a lack of funding, they cannot stimulate domestic demand to fill the gap. The problems the CEE countries are facing may seem local, but the crisis afflicting the region began in the Western financial system and has been significantly aggravated by foreign-owned banks operating in CEE. It is, of course, the responsibility of government to provide regulation, but many foreign banks that operated in CEE were, by general consent, greedy for market share because of the rapid economic growth there; they lent to almost anyone and are now suffering the consequences.

However, equally, consumers and companies need to take their share of the blame. “The ready supply of credit allowed them to convince themselves that they could accelerate their movement to Western standards of living without worrying about the consequences should their currencies ever come under pressure; everyone assumed that euro membership was inevitable,” says Rendell. For many CEE countries, euro membership now looks further away than ever.

Western Europe Wakes Up To Crisis
Toward the end of 2008, a handful of voices were warning of the impending catastrophe in CEE. Then finally, earlier this year, Western Europe woke up to the scale of the problem and began to act. “The problems are being addressed adequately,” says David Hauner, economist at Banc of America Securities-Merrill Lynch in London. “There were doubts whether Western Europe would rise to the challenge, but it now appears it will—largely because it recognizes that there are no other alternatives.”

Western Europe’s assistance to CEE is not altruistic. “CEE has substantially contributed to growth in Western Europe,” notes Hauner. “In addition, Western Europe [understands that it] cannot have a region in turmoil on its doorstep.” The collapse of the Czech government (currently holding the EU presidency) has been embarrassing. However, Western Europe recognizes that widespread political turmoil in CEE would have repercussions for the future of the EU.
Unsurprisingly, domes

tic politics has made it tough to get Western European countries to support CEE. Certainly there is no appetite for individual EU members to assist CEE countries. When Austria suggested a ?70 billion assistance package for banks in the region, it was unable to find support.
However, behind the scenes there is total commitment, according to Hauner. To date, the EU, the European Investment Bank, the European Bank for Reconstruction and Development (EBRD) and other EU-affiliated organizations have committed $100 billion to CEE countries—well above the $55 billion committed by the IMF to Belarus, Hungary, Latvia, Serbia, Ukraine and Romania. “However, going forward, the IMF [which is tripling its pool of funds to $750 billion] will be the main driving force,” says Hauner.

The initial focus of IMF, EU and other bodies’ efforts has been on fire-fighting to try to plug the most important gaps in public spending and prevent a severe contraction in the economies across the region. However, despite the scale of lending commitments, there is no way that recessions will be avoided. The year 2009 will be a year of red ink—but the IMF and other lending can help prevent chaos.

Once the fire has been damped down, the banking sector, which is expected to experience sharp increases in non-performing loans, must be stabilized as a precondition for recovery. “It may prove the case that Western banks may not be able to recapitalize their local subsidiaries infinitely,” says East Capital’s Hirn.

That could make for some tricky political decisions, given foreign ownership of most CEE banks. Western Europeans are likely to balk at bailing out their banks’ CEE subsidiaries, while CEE governments have little appetite for bailing out foreign banks that have caused so much pain to their economies. “Ultimately, the money will have to come from both international and local sources,” says Hirn.

A further precondition for recovery in CEE must be recovery in Western Europe, given the export focus of many economies in the region—and the overwhelming dominance of the EU as the CEE’s main trading partner, according to Hauner. “We expect quarter-on-quarter growth to turn positive for Western Europe in the fourth quarter, and that will provide an opportunity for CEE to recover,” he says.

CEE countries are divided between those in the euro, those in the European Exchange Rate Mechanism (ERM) II and planning to join the euro, and others that have either rejected the idea of the single currency or are not in contention for entry in the foreseeable future. Euro membership appears to have so far been broadly helpful for CEE countries by enhancing their economic credibility among global investors. “The EU convergence story might have allowed the good times to continue if convergence itself had been quicker,” says RBC Capital Markets’ Rendell. “Certainly, Slovenia and Slovakia have avoided being the worst-placed countries in the region partly as a result of their euro membership. And Lithuania’s rejection for euro membership three years ago because its inflation was a tenth of a percentage point too high now looks to have been a tragic piece of timing,” he points out.

For those countries in the ERM II, which allows their currencies to fluctuate within 15% of a target against the euro, there seems to have been no similar boost to their credibility. Instead, their eventual euro membership—once seen as a prize—has become something of a straitjacket,

and some now view the breaking of currency pegs in the Baltics and Bulgaria as inevitable.

Unlike the departure of sterling from the original ERM in 1992, for example, the Baltics and Bulgaria are unlikely to be pushed out by speculators in dramatic fashion. “The currency boards in the Baltics and Hungary would be difficult to breach given that they are essentially self-adjusting,” says Hauner at Banc of America Securities-Merrill Lynch. Instead, the governments of those countries are likely to act because they can no longer defend the pegs without causing significant social unrest.

Sharply shrinking economies—such as Latvia, which slumped by over 10% year-on-year in the fourth quarter and could well contract by 15% this year—will receive massively lower tax takings that could prompt huge public service cuts and consequent social unrest. Of course, leaving ERM II and allowing devaluation will add to the Baltics and Bulgaria’s debt problems and raise questions about stability. However, without a more competitive exchange rate, economic growth will be next to impossible. Even with a lower rate, growth will be tough, given weak global demand.

Moreover, leaving ERM II should not have to mean writing off hopes of euro membership forever. “It might actually be better for [some countries in ERM II] to devalue and re-start the two-year period in which the currency needs to remain stable against the euro [before acceptance for membership],” says Hauner. “Countries not yet in ERM II with flexible exchange rates such as the Czech Republic, Hungary and Poland could still be candidates for entering such a pre-euro arrangement. This would help anchor exchange rate expectations and could thus benefit countries’ stabilization.”

While the crisis in CEE will get deeper before it improves, the prospect of further integration with the EU is an asset that cannot be underestimated. “The long-term growth story in CEE remains intact,” says Hirn at East Capital. “It is a convergence play, and it will get back on track eventually.” Moreover, CEE continues to have characteristics that give it strength. Leverage in CEE remains much lower than in other regions, and, as importantly, the region is historically used to a lack of credit availability. In addition, CEE has experienced many crises in the past and recovered. “When things stabilize, CEE may get back on its feet quicker than other parts of the world,” says Hirn.