Established financial centers are seeing their dominance challenged in the aftermath of the credit crunch. 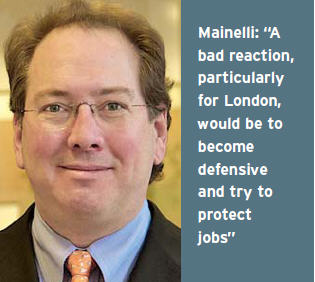 In early April, as leaders from the Group of 20 countries gathered with the expectation that they would usher in a new world of global financial regulation, it seemed fitting that the location for the historic summit was London. After all, when it comes to foreign exchange, bonds and derivatives markets, London is a leading global financial center, and it seemed only natural that it should lead the world out of the current crisis. Arguably, London also has a lot more to lose than other financial centers when it comes to the redrawing of the global financial regulatory landscape, so the city has a vested interest in appearing to lead the world back from the brink of disaster.
While many have blamed “light touch” regulatory regimes such as the UK’s for precipitating the crisis, it helped London maintain its position as a global financial center, attracting firms that did not want to list on stock exchanges in the United States, for example, where regulations such as Sarbanes-Oxley were considered to be more onerous. Alongside New York, London is one of only two “truly global” financial centers, according to the City of London Corporation’s and consultancy Z/Yen Group’s Global Financial Centers Index (GFCI). Updated every six months, the GFCI ranks more than 60 countries across a range of factors including human resources, business environment, market access, infrastructure and general competitiveness.
In the latest GFCI, published in March, London and New York retained their number-one and number-two rankings, followed by Singapore in third place, yet all 62 financial centers saw their ratings fall by an average of more than 20 points. London and New York, whose ratings declined by 10 points and six points, respectively, remain separated by 13 points. London still leads New York in four out of five industry sector sub-indexes, although New York moved marginally ahead of London in the banking sub-sector.
On the whole, financial centers at the top of the index fared better than those further down the ladder, which according to Z/Yen reflects the general “flight to safety” as people put their faith in well-established financial centers such as London and New York.
Yet a lot has changed on Wall Street and in the City of London since the crisis began. Though it is still home to the world’s largest investment banks, Wall Street is looking a little less dominant these days, with Bear Stearns and Merrill Lynch swallowed up by competitors and Lehman Brothers insolvent. “There is uncertainty about markets and assets and about which financial centers will prosper in the future,” according to Z/Yen.
So does this mean London and New York are about to be toppled off their perches by centers in emerging markets? According to Michael Mainelli, a director at Z/Yen Group, preliminary indications suggest that so far London and New York’s status as global financial centers has not been severely affected. In April, Nomura announced that it would run its global investment banking operations from London, saying that it was difficult to imagine any other European city taking London’s place. However, ongoing job losses and the threat of nationalization or splitting up of bank assets could see the size of New York and London’s financial centers shrink. “There will be some fairly strong measures taken to cut down some of the activity that led to this crisis, which will result in the shrinking of the financial sector,” observes Jens Tholstrup, executive director at UK-based research firm Oxford Analytica. 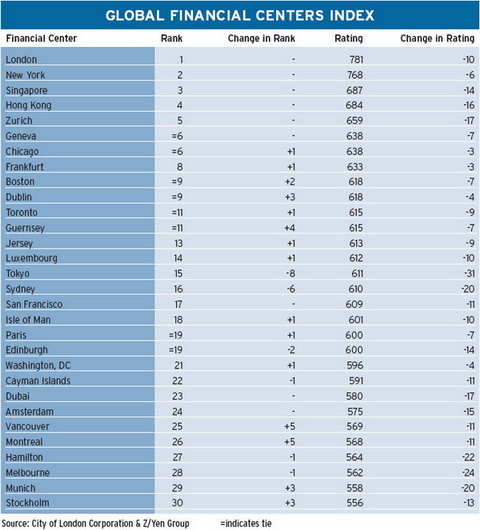 The scale of the shrinkage is largely dependent on how hard governments and regulators in the G-20 countries come down on the financial services sector. So far, all indicators suggest that they are unlikely to get off lightly. “A bad reaction, particularly for London, would be to become defensive and try to protect jobs,” says Mainelli, pointing out that London became Europe’s leading financial center in part because of the flexibility of its labor laws. An equally bad reaction, Mainelli continues, would be to assume that lack of regulation was the cause of the credit crunch; in fact the opposite might be the case. “There is a good argument that overregulation was the cause, leading to restrictive markets with the result that there were four global auditing practices, two credit rating agencies, two actuarial firms and fewer than two-score global investment banks,” he says.

Mark Weil, head of EMEA financial services at consultancy Oliver Wyman, says that if the UK joins other major economies in agreeing on a very restrictive set of rules, then firms are likely to relocate elsewhere. This would be more harmful for London, as historically the benefit that the UK has enjoyed over the US is that its principles-based regulatory approach has been “broadly business friendly,” says Weil.

Ultimately, heightened regulation could level the playing field between New York and London. “New York became a major financial center because it has a large domestic financial market to support,” explains Tholstrup. “The same is not true for the UK, and it is going to be more difficult to sustain in a tougher regulatory environment where financial innovation is not going to be as popular.”

International harmonization of regulations will also make it more difficult for financial institutions to arbitrage between financial centers, says Tholstrup. In the past, financial service providers have been able to escape the heavy hand of regulation by locating certain parts of their businesses offshore. However, US and European governments are working to tighten the rules on offshore “tax havens,” to strip them of their non-disclosure or secretive status.

So will the concept of the global financial center disappear altogether? Dan Alamariu, an analyst with Washington-based political risk adviser Eurasia Group, says what is more likely to happen is that financial centers will become more dispersed. But, he adds, that does not necessarily mean that Hong Kong, Singapore or Dubai, which are steadily gaining in importance, will steal New York and London’s thunder. “These other centers may play a bigger role in Asian financial markets. However, in London and New York the structural aspects—talent pool, political stability, business savvy—are already there,” he says.

Some believe China’s role will grow. According to Z/Yen, China’s development as a third global financial center hinges on whether China establishes a regulatory regime that attracts or repels international business. If it repels business, Z/Yen says it could create  “offshore pools of Chinese money” for another Asian center. A major factor that remains in New York and London’s favor is their well-established legal and political framework, something that China lacks, says Weil.

If a new global financial center is to emerge, it is unlikely to happen rapidly, says Alamariu. “You can raise capital in Dubai and Shanghai, but the ability to have capital markets depends on a number of structural factors —a deep and well-educated workforce, political and legal stability—and some of these things don’t exist in places like Dubai or Shanghai.” Alamariu says there is still the incentive to list in the UK and US because they have more-stable regulations and capital markets.