Mounting concern over the economic prospects of the world’s poorest nations is encouraging developed nations to reassess their aid policies.

As Group of 20 leaders descended on London for last month’s summit, most had global economic recovery on their agendas. For World Bank president Robert Zoellick the meeting presented the ideal venue to advocate for creation of his proposed Vulnerability Fund, which calls on developed nations to dedicate 0.7% of their economic stimulus programs to aid the world’s poorest countries. To Zoellick, global recovery requires both developed and developing markets pulling together.

G-20 leaders appeared to agree. “We start from the belief that prosperity is indivisible; that growth, to be sustained, has to be shared; and that our global plan for recovery must have at its heart the needs and jobs of hard-working families, not just in developing markets but in the poorest of the world, too,” said a summit joint communiqué.

With British prime minister Gordon Brown becoming one of the first to support a plan to boost assistance to impoverished nations, the World Bank

was mildly encouraged. “The impact of the crisis on developing countries was put squarely on the agenda,” says World Bank managing director Ngozi Okonjo-Iweala. “We are pleased that developed countries saw developing countries as part of the solution. They can stimulate aggregate demand in those countries so they can help bring the world out of recession.”

Zoellick’s Vulnerability Fund aims to focus on three core activities: safety-net programs, infrastructure development and support for micro-lenders and small and medium-size businesses. The idea is not a new one. As far back as 2002, 22 of the world’s wealthiest countries, meeting at the Monterrey Conference, agreed to dedicate 0.7% of national income to aid impoverished nations, with the aim of raising the $195 billion the United Nations estimated was needed each year to effectively fight hunger and disease.

The idea also has its critics. Alvaro Vargas Llosa, senior fellow at the Independent Institute, a public policy research group in California, challenges Zoellick’s premise. “The World Bank naturally has a built-in interest in pushing this policy, but rich countries should understand that many of the premises on which this approach was based are not relevant,” he says. “For instance, it has been said that poor nations have problems accessing capital; the story of the last decade is exactly the opposite. Poor nations have attracted one in five dollars of [private] foreign capital, and the tendency, until the crisis froze capital flows recently because of the US economic mess, was toward even greater movement of capital from rich to poor nations,” he points out.

A World Bank Group document setting out its recommendations to respond to the financial crisis says strong banks and access to capital are crucial. “The IFC is adopting a multi-faceted approach to rebuilding financial infrastructure involving investment in the banking sector,” says the report. “The IFC Recapitalization Fund, in which IFC has invested $1 billion and Japan $2 billion, aims to provide additional capital for banks in developing countries to ensure they can support economic recovery and job creation.”

Zoellick expects some reluctance. “New investors will be unwilling to risk private capital until losses are transparently recognized and the future of the banks is clarified,” he said in a speech in London ahead of the summit. “Recoveries are likely to begin outside the financial sector, but they will be stymied without credit. The politics of allocating government funds to recapitalize banks is not easy. People do not like bankers, especially when they have to be bailed out. Yet leaders need to explain that a healthy Wall Street or City is necessary for a thriving Main or High Street.”

Analysts estimate developing countries will face a financing gap of as much as $700 billion this year, while others say increased aid could compensate for expected declines in remittances to their home countries by workers from developing nations residing abroad. Remittances have been an important revenue source for many emerging markets.
According to the World Bank’s latest “Global Economic Prospects” report, released in March, industrialized nations will see a 3% GDP decline this year, while developing countries will grow by a meager 2%, compared with 6% growth last year. However, the developing-world outlook remains in the black only because it includes India and China, expected to grow 6.5% and 4%, respectively.
Usha Haley, Asia programs fellow at the Ash Institute, part of Harvard University’s John F. Kennedy School of Government, takes a cautious approach to the World Bank proposal. “This is an interesting proposal, but the devil is in the details. At least for the US, the stimulus is funded by taxpayer dollars. Consequently, there is a moral obligation to see that the foreign aid benefits US tax holders and their interests,” says Haley.
If it enters the Vulnerability Fund, the United States would have to contribute some $6 billion. The Obama administration already plans to double foreign assistance to help achieve the Millennium Development Goals of cutting world poverty and hunger in half by 2015. US annual federal foreign aid stands at $25 billion, with the government expecting to hike it to $50 billion by 2012. Critics argue that, with a $10.5 trillion national debt, the US is in no position to increase aid. Instead, they say, Washington should reform the way it doles out assistance. Much of US aid policy is based on outdated legislation such as the 1961 Foreign Assistance Act, designed partly to fight the Cold War. US global development policies are divided among 12 departments, 25 agencies and some 60 government offices. The United States Agency for International Development (USAID), at the forefront of US foreign aid efforts, has grown weaker and has cut staff in recent years.
US congressional leaders are joining House Foreign Affairs Committee chairman Howard Berman, a Democrat from California, introducing reforms to shift the focus of how aid is invested. About 50% of US foreign aid goes to fight poverty, with the other 50% used for political purposes. Some aid experts are calling for the US to create a cabinet-level development agency, with the UK’s Department for International Development (DFID) as a model. DFID gets kudos for having a program focused exclusively on poverty eradication. The proposal also calls for incorporating USAID into national security discussions and making the Millennium Development Goals an official government policy.

“What makes a revision necessary is not the current environment but the historical failure of the foreign aid approach,” says Vargas Llosa, editor of the book Lessons from the Poor. “In the last 50 years about $2.5 trillion has been handed out in foreign aid; GDP growth in sub-Saharan Africa has averaged 1% since 1975, which covers a great part of that period. It has not only not helped but actually made things worse through complacency, corruption and the postponement of reform,” he adds.
Vargas Llosa believes the history of foreign aid to Latin America supports his thesis. “[Latin American] countries where much of that aid has been focused have not done well, and those that received the least amount of aid, such as Chile, have done better,” he says. “Peru, a country that has received, relatively speaking, less aid than Central American countries, has reduced poverty at a faster rate than Central America as a whole in the last decade and a half.”
Responding to data that shows developed nations have contributed $1 trillion to Africa alone since the end of World War II, Zambian economist Dambisa Moyo, author of Dead Aid, says results have been less than stellar. “It is hard to see what benefit this has brought to a region that remains trapped in failure,” Moyo said at a recent conference in Kigali. She contends aid displaces productive economic activity and increases corruption, and she has instigated a campaign to ask donor nations to instead help create conditions to support businesses and reduce aid within five years. 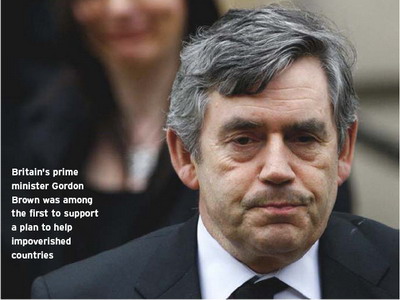 The Cato Institute, a Washington, DC-based public policy research foundation, appears to agree: “Although USAID lists South Korea and Taiwan as success stories of US economic assistance, those countries began to take off economically only after massive US aid was cut off,” its Handbook for Policymakers asserts. The organization contends donor nations should focus on boosting private sector competitiveness, tackling corruption, increasing access to education, providing access to capital and upgrading infrastructure, instead of relying on government-to-government assistance.

According to the Organisation for Economic Co-operation and Development (OECD), in 2007 the US dedicated 16 cents of every $100 earned to official development assistance, compared to the more than 90 cents contributed by Norway, Sweden and Luxembourg, all of which have exceeded the goal of dedicating 0.7% of national income to foreign aid. At 81 cents, Denmark and the Netherlands have also surpassed the goal, while Belgium and Finland are expected to do so next year.

Interestingly, the World Bank sees countries in Central and Eastern Europe as among the most vulnerable to the global downturn, despite having higher income levels than other developing regions. It argues that these countries have focused on integration with the EU and the global economy and that those links are now weakened. Furthermore, most banks in the region are owned by Western European banks, making them more vulnerable to external business decisions.

“The first thing that developing countries should do is stop looking to rich countries for answers,” says Ian Vásquez, director of the Cato Institute’s Center for Global Liberty and Prosperity. Vásquez feels trade is a more powerful tool to reduce poverty. “The discussion of foreign aid is a huge distraction from what matters in economic development,” he adds. “It’s unfortunate that in rich countries it is difficult to have a discussion on economic development without it devolving into a discussion on foreign aid.”

The Bill & Melinda Gates Foundation, a major global donor, disagrees. Though it lost a fifth of its assets in 2008, it plans to increase spending from last year’s $3.3 billion to $3.8 billion this year. “I hope the United States and other rich countries will continue to increase their aid,” wrote Bill Gates in a public letter released by the foundation this year, “and when I meet with political leaders, I encourage them to do so.” Zoellick would be proud.