“Brick is traditionally viewed as a commodity product. We believe we can market it as a fashion product” - Richard Manning - Hanson Brick

What’s in a name? The answer is everything if you’re Richard Manning.The chief executive and president of Hanson Brick, a unit of London- based building materials giant Hanson PLC, wants to build a “national brand”—or North American to be precise—in a business that has traditionally been regional in nature.

“When you can produce that many bricks, you’re going to have a big impact on the market,” says Jerry Vinci, VP of Prairie Brick Group, a Bridgeview, Illinois-based brick distributor, and for 20 years a customer of what is now known as Hanson Brick.

The seven firms Hanson bought each had their own unique management philosophies, infrastructures and growth strategies. Hanson let them operate under their existing names for several years. 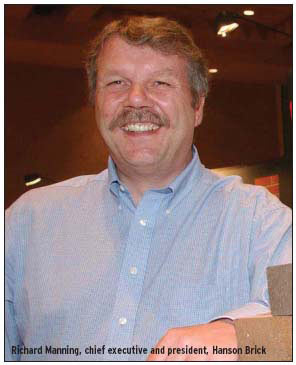 It’s All In The Name
But in late March Hanson formally put the firms under one umbrella name, Hanson Brick, in an effort to build one well known brand on the continent, streamline marketing and sales efforts, and provide customers with more products.

“We want to get in a position where if we ask anybody about brick, they immediately think about Hanson,” says Manning, a veteran of the brick business for 33 years and of Hanson for 19 years.

It’s all part of Hanson’s strategy to sell bricks based on how they look and feel rather than merely as building blocks.“Brick is traditionally viewed as a commodity product.We don’t accept that. Brick is bought on aesthetic appeal.We believe we can market it as a fashion product,” says Manning.

The acquisitions and the unified brand also allow Hanson to take a North American approach to a regional business. It can now offer clients 1,000 brick styles from its 22 factories across the region.
“It’s expanded the product choices amazingly and makes us unique from many of our competitors,” Manning says.
Bricks have traditionally been a local product, bought from plants located in the region of the buyer.

To keep the regional flavor while offering more product choices, Hanson has formed five different collections of bricks based on where they are from.There’s a Carolina Collection, Canada Collection, Heartland Collection, St. Laurent Collection, and Texas Collection.

“It allows the customers to relate to the old companies and is also a commitment to where these bricks came from,” Manning says.

Integrating the seven acquired brick firms and pulling them under one umbrella name was a huge undertaking and took time. The firm worked on it for about one year by conducting research surveys, convening focus groups, talking to customers, centralizing marketing, and acquiring a unified order processing system.

Manning won’t say how much Hanson spent on the integration and re-branding effort but admits it was “very labor intensive”.

He personally made visits to all 22 factories and presentations to all employees to let them know what was planned and why.The company also held special events with customers to inform them of the unveiling of the Hanson Brick name and what it’ll mean to them.

For example,Vinci of Prairie Brick says he was invited to a Hanson event at a horse race track in Kentucky. The main impact Vinci says he’s seen is that Prairie now has only one Hanson salesperson calling on it, compared to four before. It makes for a better, faster and more consistent flow of information, he says.

The next step in the full integration of Hanson Brick’s units will come in the third quarter when it begins rolling out a new, centralized order processing system, made by Atlanta-based software firm Ross Systems.

The new system will allow Hanson’s sales force to quote prices, check inventory, provide information and initiate orders for bricks from any of the firm’s factories.

The Bottom Line
Hanson Brick had sales of $270 million last year. Manning won’t divulge precise profit, revenue or market share projections or goals. However, he says the firm always aims for “double digit” percentage growth in revenue and earnings, and adds the acquisition integration steps that have been taken leave him “confident that it’ll give us the tools to perform in that way.”
Hanson Brick has benefited from a strong housing market.That’s key because in the brick business, 80% of bricks sold are used in residential construction. “I’m pleased that the housing market has been very resilient. That’s of course the major part of our market,” says Manning.

He adds the firm is also benefiting from targeting high population growth and young demographic areas such as Texas and in the Carolinas. Manning says the company hopes to score market share gains in those “hot” markets in the next couple years.

A weak economy and stubbornly slow business spending has cooled demand for bricks and other building products for commercial office projects. However, Vinci says he sees signs of the drop in commercial building demand leveling off after a tough 2002.