May 12, 2009
Author: Laurence Neville
The G-20 meeting in London in April was groundbreaking for the scale of the resources committed to the IMF and the unity of a diverse group of nations to combat global recession. But the legacy of the G-20 will be greater still: It marks a historic turning point in the relationship between developed and major developing countries that not only will reshape the economic and financial world but will alter the balance of global political power.
To be sure, the first steps in this change occurred at the earlier G-20 summit in Washington in mid-November 2008 when the West acknowledged the need for a broader grouping to tackle the crisis. However, while emerging markets countries were invited to play a larger role in determining the course of the global economy at the meeting, there was no detail about how that would happen.
In contrast, the April meeting has been widely hailed as a success and the first concerted global effort to tackle the economic and financial crisis. Some observers have said that historians will look back on the summit as the pivotal point of the crisis. Not insignificantly, the agenda of developing countries dominated the accomplishments of the G-20.
Most obviously, emerging markets will benefit most from the tripling of resources for the IMF and the new measures to support trade. Greater international regulation of the financial sector has also been promised, meeting the calls of those such as Brazil’s president Luiz Inácio Lula da Silva, who has famously said that the crisis was caused by “white people with blue eyes, who before the crisis appeared to know everything and now demonstrate that they know nothing.” 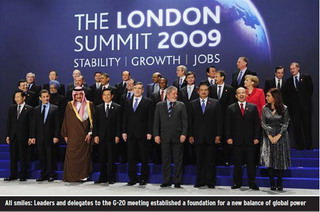 More generally, it can now be definitively claimed that the G-20, which includes Brazil along with Argentina, China, India, Indonesia, Mexico, South Africa, South Korea and Turkey, is now the center of global power rather than the G-8. There is recognition by the leaders of the global economy since World War II—Canada, France, Germany, Italy, Japan, the UK and the US—that they cannot dictate how worldwide trade and finance operates.

A new G-20-based Financial Stability Board will replace the Financial Stability Forum, which is run by 12 mostly Western countries. The G-20 also agreed to give developing countries more of a role in the operation of the World Bank and the IMF, and voting reform at these institutions is certain in the coming years.

The most important new actors in the G-20—China and Russia—have already flexed their muscles. Although they made little headway at the G-20 with their suggestion that the dollar be replaced as a global reserve currency by a currency based on the IMF’s Special Drawing Rights, the fact that such a suggestion was even made indicates both countries’ determination to become more assertive.

As renowned hedge fund manager George Soros declared in his latest book, The New Paradigm for Financial Markets, a permanent shift is occurring in the global economy that will end the West’s pre-eminence. Ultimately, developing nations—in particular, those in Asia, Soros believes—will become nothing less than “the center of the world economy.” What is equally certain is that greater economic power will be translated, sooner rather than later, into greater political power. The five permanent members of the UN security council—China, France, Russia, the UK and the US—are certain to be joined by Brazil and possibly South Africa in the coming years.