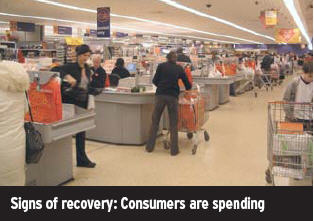 Consumer prices in the United States fell unexpectedly in March, posting their first 12-month decline since 1955. It is clear that the recession is keeping a tight lid on prices and is providing cover for the Federal Reserve to continue printing money without too much fear of inviting inflation troubles down the road.

With interest rates hovering at a fraction of a percentage point and the Fed pumping money into the economy through quantitative easing, however, it is only a matter of time before the inflation hawks come out of hiding. Not only will the Fed have to stop spiking the punch bowl, but it also will have to hide it away once the party starts getting good again.

If the Fed waits until inflation pressures are evident before it acts, it may already be too late. In a speech at Morehouse College in Atlanta, Georgia, last month, Fed chairman Ben Bernanke said there were tentative signs that the recession may be ending. He cited improvements in recent data on home and auto sales, home building and consumer spending.

The Fed’s Beige Book, which summarizes comments received from business and other contacts outside the Fed, also had some encouraging signs when it was published on April 15. It said that better-than-expected buyer traffic led to a scattered pickup in home sales in a number of Fed districts. “Many districts said factors such as homebuyer tax credits, low mortgage rates and more affordable prices led to a rising number of potential buyers,” according to the report, which was prepared at the Federal Reserve Bank of Dallas.

Meanwhile, a ballooning Fed balance sheet is creating fast growth in the monetary base. Allan Meltzer, a Fed historian and professor of political economy at Carnegie Mellon University, says the fast money growth will lead to inflation higher that it was in the 1970s.

Bernanke’s optimistic comments could be preparing the market for the day when banks resume lending and the money multiplier kicks in, creating a sudden surge in the money supply.