HUGE IPOS GET READY TO COME TO MARKET

The pipeline of planned initial public offerings is beginning to look more like a dam that is getting ready to burst. A rush of stock offerings is likely over the next four months, including some of the biggest IPOs ever, assuming market conditions remain favorable.

Agricultural Bank of China has sent out requests for proposals to 21 banks to arrange a $29 billion IPO in Shanghai and Hong Kong that would be the world's largest. It would surpass the record $21.9 billion offering by Industrial and Commercial Bank of China in 2006.

Other major Chinese banks that came to market in recent years are also expected to return with secondary offerings, as they seek to raise capital to meet higher regulatory requirements following a recent lending spree.

In India, one of the country's biggest conglomerates, Essar, is planning to raise $2.5 billion from an IPO of its energy assets on the London Stock Exchange. The sale of a 20% to 25% share in Essar Energy would be the biggest overseas listing ever by a company based in India.

Meanwhile, the Indian government is planning a series of privatizations to raise funds to help cover its budget deficit. Steel Authority of India, the state-owned steelmaker, has received approval to sell an additional 20% of the company in an offering that could total as much as $4 billion.

In Brazil, a series of IPOs is planned for this year, led by shipbuilder OSX Brasil, which is planning to raise $3 billion to $4 billion. In Russia, however, one of the biggest planned IPOs from that country this year was pulled from the London market in late March after the company, ProfMedia, was offered a major credit line from state-controlled Sberbank. Russia-based companies are expected to be active issuers of equity offerings this year and, in other cases, to establish Level 1 American depositary receipt programs in the US over-the-counter market. Russian companies are no longer required to raise capital when trading their depositary receipts overseas.

In the United States, private equity firms are preparing IPOs of some of their biggest holdings in order to return funds to clients. KKR and Bain Capital Partners are planning an IPO of retailer Toys "R" Us. Hospital chain HCA, which was acquired by KKR and Bain in 2006, could raise more than $3 billion in an IPO.

Meanwhile, IPOs in Europe are running ahead of those in the US so far this year. Germany's largest cable operator, Kabel Deutschland Holding, and chemicals distributor Brenntag each raised more than $1 billion in IPOs in March.

Global equity capital markets activity, including follow-on stock offerings, totaled $168 billion in the first quarter, a 138% increase over the same period a year earlier, according to Thomson Reuters.

J.P. Morgan led all equity capital market underwriters in the first quarter, with $14.8 billion in proceeds from 82 issues. It was followed by Goldman Sachs, Morgan Stanley, Bank of America Merrill Lynch and UBS.

Financial sector issuers led the industry breakdown, with 34% of the overall volume, followed by materials, energy and power, and industrials.

Freeman Consulting estimated that fees from equity capital market transactions in the first three months of 2010 totaled $4.5 billion and were up 136% from the first quarter of 2009. 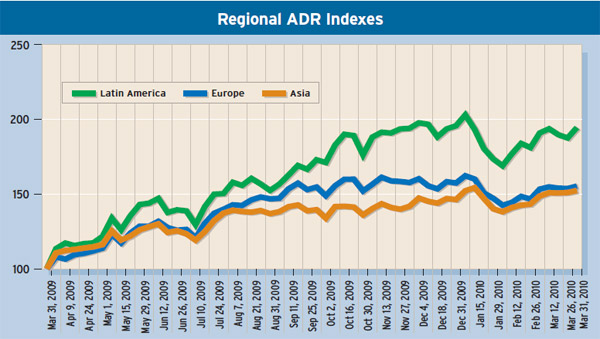