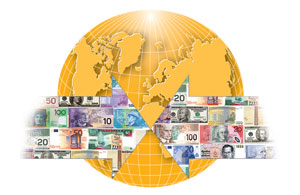 The dollar has found a new reason to rally. Earlier this year, the greenback benefited from the sovereign risk crisis that focused on Greece and other EU countries. Now, the growing US economy has taken over as a fundamental reason for the dollar to extend its rally that began last November, just as Americans sat down to their Thanksgiving holiday dinner.

The proximate cause of the dollar's turnaround late last year was the shocking news that Dubai would ask creditors of Dubai World, the conglomerate behind its rapid growth, and Nakheel, its property developer, to agree to a debt standstill. The technical debt default led to a series of sovereign debt downgrades and a flight of capital from emerging markets. The dollar was the beneficiary of the sudden return of risk aversion, just as it had been throughout much of the global financial crisis, when it served as a safe haven.

With the global economic recovery more firmly established, the old "risk-on/risk-off" switch for buying or selling the dollar is not working any longer. Following the passage of US healthcare reform legislation in March, stocks rallied and the dollar strengthened. "The negative correlation between the dollar and the Dow [Dow Jones Industrial Average] has ended," says Michael Woolfolk, senior currency strategist at BNY Mellon, based in New York. "There is more concern now about economic fundamentals and raised expectations of US growth and interest rate increases."

November Rate Hike Seen
On the heels of the healthy March US jobs report and new cyclical highs for both the manufacturing and service sector Institute of Supply Management (ISM) surveys, the market moved to fully price in a 25 basis-point increase in the federal funds rate at the November meeting of the Federal Open Market Committee, says Marc Chandler, global head of currency strategy at Brown Brothers Harriman in New York. This was evident in the interest rate futures market.

"For most of last year it seemed that better US economic data was often greeted with a weaker dollar on ideas that it encouraged the risk-on trades, which involved selling the greenback," Chandler says. Taken together, the ISM report and the employment data do point to some broadening and deepening of the economic recovery, and the dollar advanced on the news, he notes.

"Our hypothesis is that the risk-on/risk-off matrix that seemed to dominate market developments during much of the crisis is breaking down," Chandler says. "We suspect it is being replaced by a greater emphasis on country-specific macroeconomic developments."

Bull Market for Dollar
It is important to recognize that the low the dollar recorded in the second half of last year was not below the cyclical low set in late 2007, Chandler says. "This successful test further underscores the likelihood that a multi-year bear market for the dollar has ended and a new bull market has begun," he says.

Over the coming years, as the bull market for the dollar unfolds, it is reasonable to expect the euro to return to its birth rate, just below $1.20, which roughly coincides with its 10-year moving average, although a move to parity cannot be ruled out, Chandler says. The 10-year moving average is also a good approximation of purchasing power parity, which many economists suggest currencies gravitate around in the long run, he adds.

"The US economy appears to be emerging from the crisis more robustly than Europe or Japan," Chandler says. The Federal Reserve seems more likely to raise interest rates before the Bank of England, the European Central Bank (ECB) and the Bank of Japan, he adds. "Contrary to rumors of its demise, the US is still the world's largest economy, and whether number two is Japan or China, the US GDP [gross domestic product] is roughly three times larger," he points out. "The gap between the US per capita GDP and Europe's has grown since the advent of the euro."

New Forces Emerge
The first part of the dollar's recovery seemed to be related to year-end position adjusting, just like what happened at the end of 2008, when the near-term trend was reversed, according to Chandler. Two new forces emerged at the beginning of the year that extended the dollar's gains, he says. First, China responded to a surge of new bank loans by allowing short-term rates to rise and by increasing reserve requirements. This caused a wave of profit taking in commodities and emerging-market equities, which required investors to buy back the dollar. Second, Greece's problems exposed a fissure in the foundation of European economic and monetary union that weighed on the euro and helped spur the dollar higher, Chandler says.

Brendan McGrath, senior foreign exchange trader at Custom House, a Western Union global payments company based in Victoria, British Columbia, Canada, says the troubles in Europe are far from over. "While positive risk sentiment will take a toll on the dollar, concerns over the eurozone will prevent the euro from rising," he says. The euro fell to its lowest level in 10 months against the dollar at the end of March, after Fitch Ratings downgraded Portugal to AA-. Fitch said the outlook on Portugal's rating was negative, and it cited significant budgetary underperformance in 2009 as a key reason for the downgrade.

"If Spain and Italy need help, the crisis could worsen," McGrath says. "Too many countries in Europe are in trouble to enable the European Central Bank to even think about raising interest rates." The Fed will raise rates first, he says, although that will not happen for a while yet.

Carry Trade Could Return
"The economic fundamentals are back in focus, and good US data are helping the dollar instead of bad data," McGrath says. The dollar should be particularly strong against the British pound and the euro but less so against the Asian currencies in light of that region's strong growth, he says. Once US rates start to rise, this could bring the carry trade back to the yen, he adds. Investors could borrow yen at a very low interest rate and sell the yen for dollars to purchase US treasury securities.

"Investors don't believe in the euro as they did before," says Leon Yohai, CEO of Athens, Greece-based ZuluTrade, which provides automated FX trading. "They trust the dollar more than they used to," he says. ZuluTrade identifies top foreign exchange traders and allows retail traders to trade automatically based on the actions of these "signal providers." But retail traders are not driving the market, Yohai says, since they account for only 5% of the volume. "The big banks are moving the market based on interest rate developments," he says.

The European Central Bank may very well keep interest rates on hold through the end of 2010, says Woolfolk of BNY Mellon. "The Greek debt crisis has provided the ECB with a convenient excuse to delay normalization of interest rates this year," he says. "The implications are clear: The euro will weaken," he adds. "With the eurozone struggling to stimulate growth and employment, a weaker currency is just what the member governments had hoped for."

The greenback is not the only dollar that is strong. The Canadian dollar, which is known as the loonie, gained parity with the US dollar last month for the first time since June 2008. Part of the reason for the loonie's climb is the strong performance of the Canadian economy. The composite index, a measure of leading economic indicators, rose 0.8% in February, Statistics Canada reported. That was the ninth monthly increase in a row.

"Canada's leading indicators are the strongest in 25 years," Woolfolk says. Canada's gross domestic product could grow 3.5% to 4% this year, which would be somewhat stronger than the 3% GDP growth forecast for the United States, he says.

"Canada's banking system came through the crisis much better than many others," Woolfolk says. "Canadian banks had no exposure to subprime mortgages and other risky assets." Meanwhile, the country's fiscal balance has been restored.

Higher energy prices are also a major reason for the loonie's gains, Woolfolk adds. The Canadian dollar is viewed as a commodity currency and trades in close relation with such currencies as the Australian dollar and the New Zealand dollar.

Although Canada's economic fundamentals are sound, the loonie will never rival the US dollar as a reserve currency, Woolfolk says. The Canadian dollar was bought during the Lehman crisis, he notes, but Canada's markets are too illiquid and its foreign currency reserves are too tiny for it to be a reserve currency, he says. Canada also lacks the deep debt markets of the US and, to a lesser extent, Europe.

Meanwhile, there were indications as Global Finance went to press that China was considering revaluing its renminbi peg to the dollar, or widening its daily trading band. The US Treasury postponed a report that could have named China as a currency manipulator. The renminbi is 15% to 30% undervalued on a purchasing power parity basis, Woolfolk says. If the trading band were widened, he says, the renminbi would rise to the top of the new band. "It's like trying to hold a beach ball down under the water when you are in the middle of the ocean," he suggests. 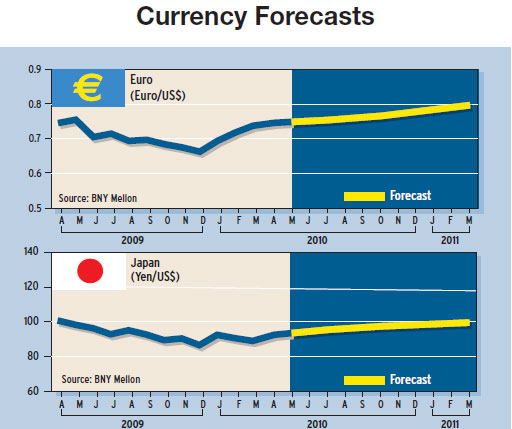 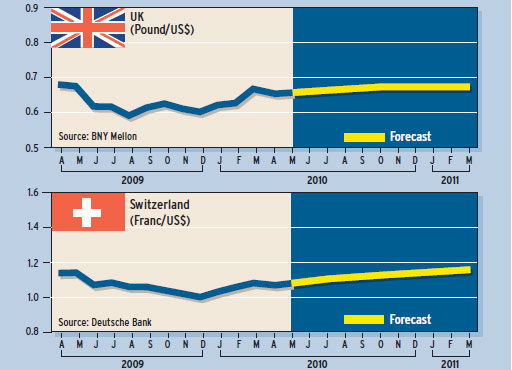 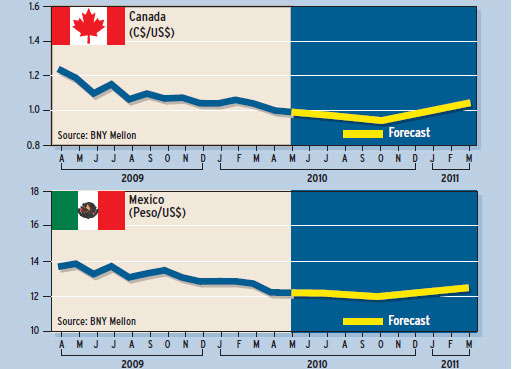