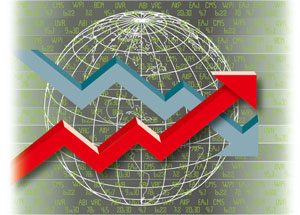 Companies based in Russia and China are extremely interested in listing overseas and probably will be the biggest issuers of depositary receipts to tap into global equity markets this year, bankers say. DR capital issues from India will be smaller but no less consistent in their steady flow to market, the bankers add. “At least 500 companies in China are looking to issue DRs, and about 50 are ready, serious and capable of coming to market this year,” says Michael Cole-Fontayn, chief executive of BNY Mellon’s depositary receipt division.

Russia likely will join China this year as a major issuer, he adds. The Russian private sector will be raising capital to take advantage of strategic opportunities. “The higher-growth markets continue to be aggregators of capital,” Cole-Fontayn adds. Of the 104 DR issuers that completed equity offerings last year, 83 were from China, India or Brazil.

“There are some challenging tax consequences for capital raising using DRs for companies in Brazil,” Cole-Fontayn points out. In October 2009 the Brazilian government introduced a 2% transaction tax to discourage foreign buying of its currency in an attempt to prevent the real from rising. “The tax is a frictional cost of capital, and although it was supposed to be temporary, it is still in effect,” Cole-Fontayn says.

Investors around the world continue to view DRs as a simple, effective way to diversify their portfolios, he says. The value of DR trading rose 30% to $3.5 trillion in 2010, while the volume of trading rose 9% to a record 147 billion DRs.

There were 151 new sponsored DR programs introduced last year, 48 more than in 2009. This brought the total to 2,205 programs from 74 countries.

The sovereign debt crisis in Europe, the political uprisings across North Africa and the Middle East and the earthquake, tsunami and nuclear crisis in Japan contributed to market volatility in the first quarter of 2011. “If the rest of the year is anything like the first quarter, it will be fairly challenging for companies to come to market,” Cole-Fontayn says. “In what is very much an investor’s market, these issuers will need a well-reasoned story with good industrial logic.”

Meanwhile, more and more companies are seeking listings and trading platforms outside of the United States and the eurozone, and BNY Mellon expects this trend to continue. In its latest annual survey of investor-relations practices at 390 companies worldwide, the bank found that 22% are considering a secondary listing in an emerging market outside their home market, such as India, Brazil, Singapore and Hong Kong.

Unless macroeconomic conditions deteriorate, the level of capital-raising using DRs in 2011 will exceed the nearly $25 billion total for 2010, says Dirk Jones, global head of financial institutions client sales management at Citi. “Initial public offerings will drive most of the activity,” he says. Although companies in Russia and China will be most active, there will also be some DR issues from India, Taiwan and South Korea, Jones says. In addition, there could be some new markets opening up, such as Vietnam.

Food and agricultural infrastructure, retail and banking sectors are among the promising areas for new DR issues, according to Jones, who also sees a positive trend in the 950 new unsponsored DR programs created in the last few years. “Some of these companies are moving to sponsored programs,” Jones notes.

DR trading volume in the first quarter of this year was 17% above the same period a year earlier, he says. Major Russian and Brazilian companies were particularly active.

Claudine Gallagher, global head of J.P. Morgan’s DR business, says Russia and China will lead the way in DR issues to raise equity capital in 2011. “There will be a lot of bite-size issues from China that should be easily digested by the market, as well as some bigger deals from Russia, which could be more difficult for the market to absorb if conditions in the equity markets are not optimal,” she says.

How successful companies are in accessing the market will depend on how investors view developments such as the political turmoil in the Middle East and North Africa and the earthquake and tsunami in Japan, Gallagher says. “If the recent world events that have unsettled the markets subside, it should be a good year for capital raising,” she says.

A steady flow of smaller deals from India is likely, Gallagher says. “There also will be some new issues from Brazil. Brazilian issuers are similar to those from Russia. When they come, they are usually quite big.” Elsewhere in Latin America, issuers in Colombia and Argentina could come to market, she points out.

Mongolia also could produce some large issues, similar to those from Russia and Brazil, Gallagher adds. The mining and excavation industries in Mongolia tend to be capital-intensive. Nigeria and Taiwan are two more countries with companies in the DR pipeline, Gallagher says. 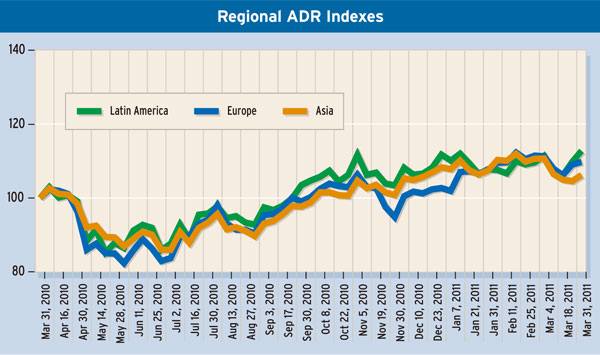 Akbar Poonawala, North America regional head of global transaction banking and head of global equity services at Deutsche Bank, says new DR issuance in the first quarter of 2011 has continued to come mainly from Brazil and China. “Companies based in India are resorting more to the QIP [qualified institutional placements] market, although at some point privatizations could become more important,” he says. “Russia has had some issuance at reduced levels, but there are signs this will likely pick up soon.”

Poonawala says Brazil accounted for about half of DR capital-raising activity in 2010, while China accounted for another 25% of the total. “Brazil has a number of large corporations with name recognition that are potential issuers, and they have a well-worn path to the US market,” he says.

DR trading values have been consistently rising in recent years, Poonawala says. They increased from $120 billion in 2008 to $147 billion in 2010, and will rise further in 2011, he says. “Investors view ADRs and GDRs as more mainstream investments and an acceptable asset class,” he says. “There also has been a quantum shift in the way investors see emerging markets, which are also being considered more mainstream.”

It remains to be seen how the spate of global stock-exchange mergers will affect the DR market, Poonawala says. “The DR product has withstood the test of time, and the need for DRs continues,” he says. “There could be an extended period of coexistence with a proliferation of market structures rather than a centralized market.”

A deeper, more efficient transatlantic equity market could lower the cost of capital, some bankers say. This could lead to more-liquid and more-active markets.

A facilitated regime in the continental European countries served by the Euronext exchange—France, the Netherlands, Belgium and Portugal—enables companies listed with the US Securities and Exchange Commission to gain “fast path” access to a cross-listing on NYSE Euronext’s European platform. Such companies do not need to draft and translate a separate prospectus in order to be admitted to trading. The SEC filing is combined with a summary, known as a wrapper, that addresses any additional European and local requirements.