Europe’s continuing sovereign debt crisis has left many non-members of the eurozone relishing their monetary independence. 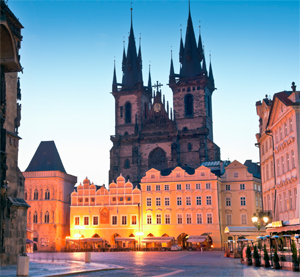 The eurozone debt crisis has taken a toll on financial markets worldwide, rattling investors’ confidence with fears of default and contagion. The economic woes of the weaker peripheral eurozone nations continue to affect the formerly communist countries of Central and Eastern Europe (CEE), although that impact has evolved over the past year.

One repercussion of the crisis is a newfound reluctance of CEE countries to join Europe’s currency union. Before the trials of the peripheral countries surfaced, wannabe euro users regarded euro membership as a route to lower borrowing costs and economic stability. Now, noting the wide spreads in peripheral countries, they recognize that belonging does not guarantee lower rates.

The Czech Republic, under euroskeptic president Vaclav Klaus, is particularly unenthusiastic. Nearly 74% of Czech citizens are against joining the eurozone, according to a recent poll by Czech Republic–based polling agency SANEP. Poland likewise is showing little appetite to join and would be hard pressed anyhow to meet the Maastricht criteria for entry. Miroslav Plojhar, a London-based economist at J.P. Morgan, points out: “No position is neutral now. Countries must either receive or provide support.” Slovakia, which adopted the euro in 2009, protested last year against the Greek bailout, outraged “that poor Slovaks might be subsidizing wealthy Greek pensioners,” says Plojhar.

Nor would the European Commission and European Central Bank welcome the eastern region with open arms. Win Thin, global head of emerging market currency strategy at Brown Brothers Harriman, notes fatigue on both sides. While Hungary, say, might be more willing to come on board, the ECB would be loath to accept it, fearing another problem case. Thus, new entries have been postponed indefinitely, perhaps for at least another decade.

Since last May markets have come to recognize that direct economic linkages between the CEE region and the peripheral EU are limited, with CEE exports to Greece, Portugal and Ireland contributing less than 5% to CEE’s GDP. “Initially, people had priced in a worst-case scenario,” comments Robert Burgess, Deutsche Bank’s chief economist for Europe, the Middle East and Africa.

There is no guarantee, however, that the worst case won’t materialize, and some analysts are concerned that Germany might still be vulnerable to an economic pull-back. Exporters in CEE are highly dependent on Germany, with Hungary and the Czech Republic each garnering over 70% of GDP from those export revenues, according to Brown Brothers Harriman currency strategist Ilan Solot. Poland is less exposed, thanks to the ability of its domestic economy of 38 million people to generate internal demand. (Having a less-open economy helped Poland avoid the worst of the credit crisis, without dipping into recession.) Growth in Hungary and the Czech Republic still remains subdued, after severe downturns. Both countries rely on exports to Germany of auto components, such as gear boxes, alternators and batteries. “As long as the German export machine for Audis, Volkswagens and Mercedes to China and India thrives, the plants in Central Europe will supply it,” says Nigel Rendell, emerging markets strategist at RBC Capital Markets.

Many big Western European banks have significant exposure to CEE. The dangers to the banking sector are most pronounced in Hungary, where on April 5, Moody’s downgraded seven banks, including several subsidiaries of Austrian and German institutions. Also in Hungary, a recent tax imposed on bank profits may prompt eurozone banks “to take their credit elsewhere,” Solot suggests.

Poland, with its larger domestic banking sector than CEE counterparts, is more isolated from external banking exposures. Hungary, on the other hand, is vulnerable, in its dependency on foreign-exchange-linked lending. Since 2005, Hungarian homeowners have been taking out a majority of their mortgages in Swiss francs, amounting to a huge proportion of overall retail lending. When the Swiss franc appreciated and the forint declined, those mortgage payments swelled.

The relationship between ECB interest rate policy and those of the CEE central banks is complex. Domestic factors drive Hungary and Poland, while the Czech Republic tends to follow the ECB’s lead. Overall, the trend is toward tighter monetary policy. Poland raised rates by 50 basis points in January and again in April and has indicated it anticipates further 25 bps hikes in subsequent quarters in an effort to contain inflation. Hungary pushed rates up 75 bps from November through January—a move that has been attributed in part to a changing composition of the central bank. Rendell says, “They may have moved a little faster, out of concern that new appointees might be government puppets” who would be tempted to pursue looser monetary policy. In the Czech Republic, where rates rarely diverge more than a couple of percentage points from ECB levels, current base rates remain low at 0.75%.

Now that the ECB has started to tighten, there are questions over how CEE policymakers will respond. If Germany is the key country that matters for the eastern nations, higher eurozone rates should not cause any alarm, says Burgess. “Monetary policy is probably too loose for Germany in any case,” he suggests. Rates will probably track up across the board, analysts believe.

“A monetary union without a fiscal union is problematic”

“Without a closer fiscal union, such as an issuance of commonbonds, doubts about a future break up will always linger” — Neil Shearing, Capital Economics

Since the Greek bailout in May 2010, the market gyrations resulting from each successive eurozone crisis have diminished. Ripples may continue to weaken, but if the storm spreads to Spain or Italy, they might intensify, predicts Neil Shearing, senior emerging markets economist at Capital Economics. Hitherto, CEE markets may have even benefited from upheavals in the eurozone periphery, as investors fled in search of more stable returns. Rendell believes they perceive better opportunities in CEE countries, “which are not tied to an exchange rate that makes them uncompetitive.” Credit default swap spreads offer a telling clue. The cost of CDS insurance has risen since last May in peripheral Europe, while spreads in the Czech Republic and Poland have decoupled and contracted.

The fate of the euro remains in the balance. “A monetary union without a fiscal union is problematic,” Shearing points out. “Without a closer fiscal union, such as an issuance of common bonds, doubts about a future break up will always linger.” Against such doubts, it is no wonder that CEE countries are steering clear of eurozone membership, uncertain about the future fate of the currency. As Rendell says, “there might only be Germany left by then.”