Federal Reserve chairman Ben Bernanke said recently that improvements in the US labor market might not be sustained because of weak economic growth and signaled that the Fed was likely to keep interest rates low and maintain an easy monetary policy for a considerable period. This was music to the ears of bond market bulls. 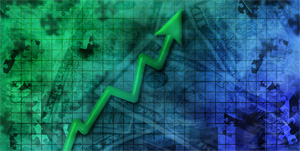 Although Bernanke did not go so far as to suggest further easing moves by the Fed, he did say that conditions were “far from normal” in the labor markets and that the number of people with jobs is still well below pre-recession levels. Analysts reactions have been mixed.

Analysts at RBC Capital Markets in New York reaffirmed their view that another round of quantitative easing—QE3—is likely. As long as the US economy continues to limp along, hiring remains anemic and risks beset the global economy, QE3 will become a reality later this year, they wrote in a recent report.

The US economy will face the threat of a massive fiscal contraction come year-end, and “the Fed will remain decidedly in play,” according to RBC analysts. Additional easing is likely to be smaller than either QE1 or QE2, and is unlikely to be any more successful in jump-starting economic activity than the Fed’s previous efforts, the firm says, pointing to a lack of credit expansion.

By contrast, economists at Barclays say the US economy would need to weaken and inflation slow, accompanied by a worsening in risk appetite of investors, before the Fed would start a further round of QE. Barclays’ survey of nearly 700 institutional clients in March showed that 80% viewed the equity market as fairly valued or undervalued, and most thought there would be no major disruption to the market this year. If the markets were to become spooked about inflation, however, the Fed could change its course.

HOW LOW CAN YIELDS GO?
Credit research analysts at Barclays say there are a number of factors that could limit how low bond yields could go. For one thing, demand tends to dissipate when the market rallies. In addition, liquidity has decreased in credit markets, as dealers shrink their balance sheets to conserve capital.

“This has led to lower market turnover and increased concentration of trading activity,” Barclays’ analysts say. “Investors will demand extra spread [over treasury securities] for the decreased liquidity.”

There are also several factors that should support the credit markets, Barclays says. Increased risk aversion since the financial crisis has generally benefited credit over equities. “We continue to be in a low-default-rate environment, and the booming new-issues market may extend this benign default period even longer,” Barclays says.

High-yield debt has been a beneficiary of the rally in risky assets this year, but lower-quality issuers can see their windows of opportunity for issuance open and close abruptly, the firm notes.

RECORD DEBT ISSUANCE
The US corporate bond market had record issuance of both high-yield and investment-grade debt in the first quarter of 2012. The $89 billion of high-yield debt was 5.1% higher than the previous quarterly record set in the fourth quarter of 2010, according to Thomson Reuters. The high-yield total was up 163% from the final quarter of last year.

US investment-grade corporate debt proceeds of $294.2 billion in the first quarter of 2012 represented the largest first-quarter total on record, and a gain of 96.3% from the previous quarter. J.P. Morgan was the leading underwriter of both high-yield and investment-grade US corporate debt in the first quarter of this year, while Bank of America Merrill Lynch ranked second in both categories.

European companies paid $3.9 billion in overall investment banking fees during the first quarter of 2012, according to Thomson Reuters and Freeman Consulting. Debt capital market fees accounted from 40.4% of the total fee pool, the highest quarterly share since such records were begun in 2000.

New issuance of corporate debt from emerging markets issuers totaled $113 billion in the first quarter, breaking all-time quarterly issuance records. Companies in Brazil, Russia, India and Mexico were the most active, accounting for 53% of the total.

CIT GROUP PASSES MILESTONE
New York’s CIT Group, a business lender, had the largest single issue of high-yield debt in March, according to KDP Investment Advisors. CIT sold $1.5 billion of senior unsecured notes due in 2018 with a coupon of 5.25%.

“This transaction is a significant milestone for CIT, as it represents our first public unsecured bond issuance since 2007,” says John Thain, chairman and CEO. Thain was chairman and CEO of Merrill Lynch before its merger with Bank of America.

CIT said it would redeem part of its 7% senior unsecured notes maturing in 2017, reducing its higher-cost debt by $500 million. The company, which emerged from a brief bankruptcy in late 2009, operates under a written agreement subjecting it to scrutiny by the Federal Reserve Bank of New York. Credit Suisse, Deutsche Bank, Morgan Stanley and UBS Securities were joint bookrunning managers for the deal.

CenturyLink, a Louisiana company that provides broadband and telecom services, sold $1.4 billion of unsecured notes due in 2022 with a coupon of 5.8%. The company also sold $650 million of 30-year, unsecured notes with a coupon of 7.65%. It will use the proceeds to help fund subsidiary Embarq’s tender offer to purchase its outstanding notes due 2016 and 2013 for a total of more than $2 billion. 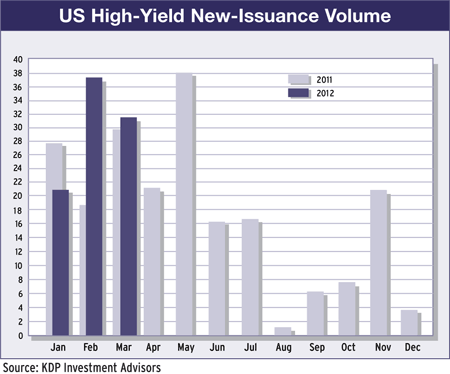 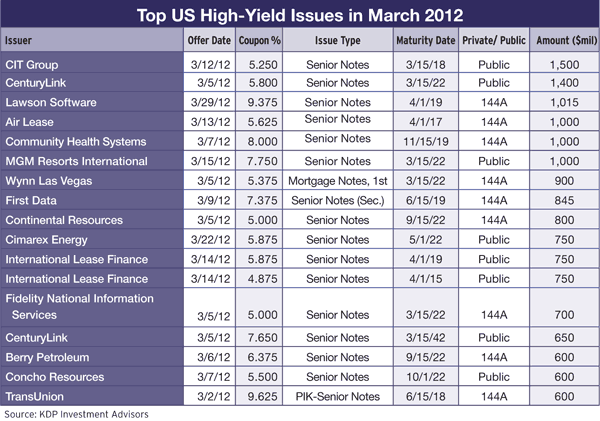