The global equity capital markets got off to a relatively slow start in 2012, with a decline of 26% in activity in the first quarter from the same period a year earlier, despite a strong pipeline of new issues waiting to come to market and a drop in overall market volatility.

The $150 billion raised represented the slowest opening quarter since 2009, according to Thomson Reuters. The global volume of initial public offerings declined 61% from the first quarter of 2011, while follow-on offerings fell 11%.

Citi led all equity capital market underwriters in the first quarter of 2012, with $14.3 billion in proceeds from 76 issues. Goldman Sachs slipped to number two from the top slot a year earlier. J.P. Morgan led all equity underwriters by fees, with $286 million, and was third in terms of proceeds.

China’s Guosen Securities was the leading underwriter of global IPOs in the first quarter, with proceeds of $1.44 billion from 11 deals. Shenzhen-based Guosen, a state-owned company, more than doubled its Hong Kong staff last year and hired Cheng Gang from HSBC to head its Hong Kong investment banking.

The increase in the number of issues in the US market bodes well for the remainder of the year, at a time when overall market volatility has declined 40% from the highs in the second half of 2011, says Henri Leveque, leader of PwC’s US capital markets and accounting advisory services.

“The IPO pipeline remains healthy, with a diverse range of companies exploring public launches, with notable strength in the technology, industrial and financial services sectors,” Leveque says. “Major IPO activity from some of the larger, well-known technology players, including Facebook, will likely lend support to a host of smaller technology companies looking to enter the public markets.”

STRONG AFTERMARKET
New issuers in the US market saw strong aftermarket investor interest. Shares of Millennial Media, a mobile advertising and data company, more than doubled in their debut on the New York Stock Exchange on March 29. A day earlier, organic food company Annie’s closed 89% higher after pricing at the top of its expected range.

“Financial sponsors continue to play a major role in IPO market activity, as they seek to fully monetize key portfolio investments in an improving climate for the capital markets, particularly in the technology sector,” Leveque says. All of the technology IPOs in the first quarter were backed by financial sponsors.

Deutsche Bank started programs for Essilor International of France, Murata Manufacturing of Japan, and Regus, based in the UK. 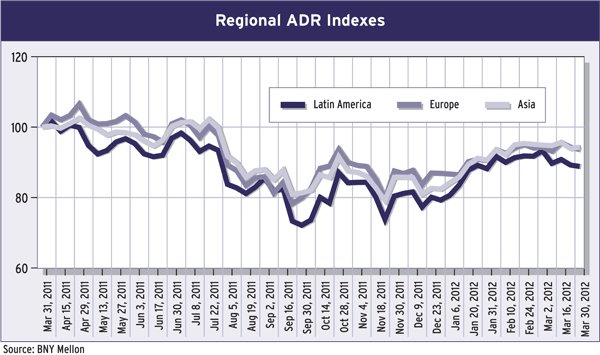