The dollar rose sharply last month after the Federal Open Market Committee’s meeting in March signaled that further monetary easing is unlikely unless the US economy slows significantly or the inflation rate seems likely to remain below the 2% target.


Federal Reserve policymakers also muddied the waters by indicating that their pledge to hold interest rates at low levels through late 2014 “would be subject to revision in response to significant changes in the economic outlook.”


While the minutes of the meeting showed decreased likelihood of additional monetary stimulus, they also indicated that the Fed was not impressed with the speed of the recovery, despite signs of strength in manufacturing and employment.


“I think the quantitative easing option is still very much in the Fed’s tool kit and ready to be deployed should we see a repeat of 2010 and 2011, when the much anticipated acceleration in growth and employment at the start of each year went flat by summer and forced more [monetary easing] from the Fed,” says David Gilmore, economist and partner at Foreign Exchange Analytics in Essex, Connecticut.


The Fed is not about to declare “mission accomplished,” when concerns remain about the housing market, the labor market and the austerity-induced slowdown emerging in the eurozone, Gilmore says.


“With fiscal austerity just cranking up in large economies like Italy, Spain and France, the question currency market participants should be asking is how much more accommodation can we expect from the European Central Bank, as fiscal support is off the table for all practical purposes, and the only game in town is how quickly [ECB president Mario] Draghi can get the euro down,” Gilmore says.

WEAK EURO NEEDED
A weaker euro has to be the main transmission mechanism for monetary policy to work, given a banking environment where balance-sheet adjustment restricts the flow of credit to households and firms, Gilmore says. Apart from a much weaker euro, there is little the ECB can do to get the eurozone growing again, since banks are unwilling to lend in the face of growing capital needs and regulatory changes, he adds.


The euro area remains the weakest part of the global economy, and the US economy will likely outperform the rest of the world in the coming months, according to foreign exchange analysts at Barclays Capital in New York. “Strong US growth with little change in the Fed’s policy suggests only a gradual increase in US long-term yields in the coming months, which should support the dollar against low-yielding currencies such as the yen, the Swiss franc and the euro,” they said in a recent report.


Softness in the housing sector is one of the main concerns for the Fed, and one of the reasons why the US central bank is not likely to change its accommodative policy stance anytime soon, even though the improving outlook in the rest of the economy suggests there is a significantly reduced likelihood of a third round of quantitative easing, according to Barclays Capital.

PICK-UP IN VOLATILITY
Measures of volatility in euro/dollar currency adjustments edged down to their lowest levels in nearly four years at the end of the first quarter, but analysts expect this situation to change. “We expect to see a pickup in volatility in the second quarter, as election fever grips Europe, China emerges from a period of weak growth, and shifts in central bank policy cause waves in global financial markets,” says Kathleen Brooks, research director at Forex.com, the retail division of GAIN Capital.


“Our expectation is that market optimism will falter as problems in the eurozone remain far from resolved,” she says. “The first quarter was all about stabilization in the eurozone debt crisis and signs of strength in the US economy. The outlook is not as rosy as we enter the second quarter,” Brooks says.


“We believe the yen will continue to trend lower and the euro could be at risk from further downward pressure, especially as we expect the focus to shift from Greece to the growth data coming out of Spain and Portugal,” she adds. “Key risk events over the next few months include [the potential for] a failed bond auction and rising bond yields, which could send the euro flying south.”

BIGGER FIREWALL
Euro-area finance ministers agreed at the end of March to expand their financial firewall to €700 billion (more than $1 trillion) by combining the resources of two bailout funds. However, should Spain or Italy need assistance, the firewall is likely to prove insufficient, says Marc Chandler, global head of currency strategy at Brown Brothers Harriman in New York. “We remain concerned that, below the surface, the situation in the eurozone is actually deteriorating,” Chandler says. “It is not only a matter of a deeper economic downturn, but several policy developments are worrisome.”


For one thing, the Bundesbank indicated it would no longer accept government-backed bank bonds as collateral from Greece, Portugal or Ireland. The sovereign and bank-rollover risks have been reduced, but the periphery of Europe is not yet on a sustainable debt path, Chandler says. “We expect the second quarter to see the major central banks continue with existing monetary programs without announcing fresh initiatives,” he says. “Specifically, this means no QE3 from the Fed and no additional rate cuts or new three-year loans from the ECB.”


It would take a marked deterioration in economic conditions, suggesting that either a new recession is likely or that the threat of deflation has reemerged, to increase the chances of a new round of asset purchases by the Fed, Chandler says. The US economy is expected to rebound in the second quarter after modest deceleration in the first quarter, he says. Improvement in the labor market and a drawdown in savings should continue to support consumer spending, the main engine of growth, he adds.


Stronger US growth fundamentals and the reduced potential for monetary policy easing should support the dollar in the second quarter, according to Chandler. “The biggest gains should come against European currencies, but we expect the dollar to trade firmer against the yen as well,” he says.


The yen was the weakest of the major currencies in the first quarter, losing about 7.2% against the dollar, Chandler notes. Both speculative positions and portfolio flows moved against the yen in the first three months of this year. 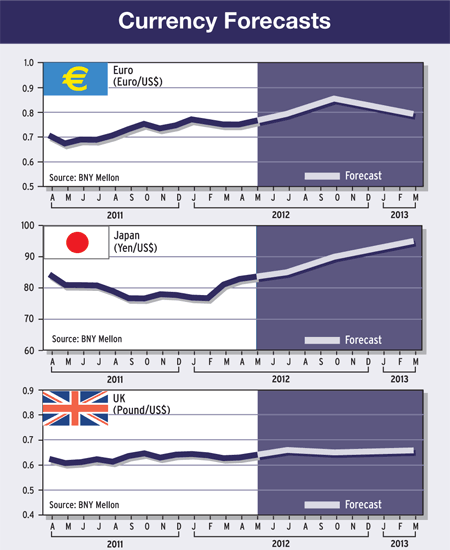 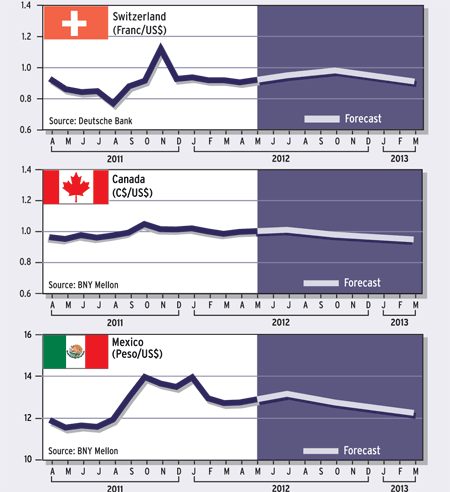 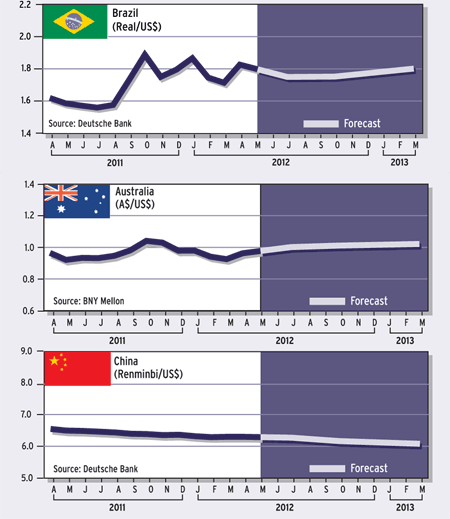 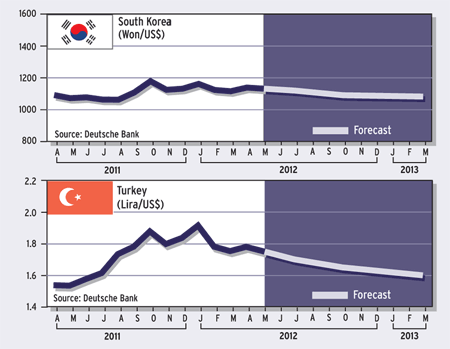