North America’s banks are well along the road to recovery from the financial crisis, amid signs of improvement in the US and Canadian economies. The Federal Deposit Insurance Corporation says US banks earned $119.5 billion in 2011—the most in five years. And the number of banks on the FDIC’s “problem bank” list fell to 813 in the fourth quarter from 844 a year earlier.

However, profits have been concentrated in the biggest banks. Those with assets of more than $10 billion accounted for the majority of earnings growth last year. As the economic outlook began to improve, big banks began to reduce their huge loan-loss provisions.

The outlook is perhaps best described as partly sunny, with worries about potential spillover effects from Europe’s debt crisis. Corporations are borrowing once again, but many of them are tapping the bond market and paying down bank loans. Banks, meanwhile, have reduced their bond inventories and are taking fewer market risks. The plumper capital cushions they have installed at the behest of regulators will make the banks safer, but potentially less profitable.

US banks are willing to lend, according to the Federal Reserve’s senior loan officer survey. Meanwhile, the leverage ratio of US commercial banks is close to an all-time low, according to Fed statistics.

Canadian banks have long followed the less-risky path now being forced upon their southern neighbors. Scrutinized by watchful regulators, they avoided the worst of the financial crisis and are more attuned to the new business models coming into fashion worldwide. The World Economic Forum named Canada’s banks as the world’s soundest for four straight years.

The Canadian Bankers Association notes that Canada’s banks are well-managed, well-regulated and well-capitalized. “Our strong and resilient banking system is at the heart of Canada’s economic recovery,” it reports. Canada’s administration has not had to bail out financial institutions, inject capital into institutions, or set up public entities to buy toxic assets.

JPMorgan Chase earned a record $19 billion last year on revenue of $100 billion, rounding to the nearest million. The bank provided $545 billion of credit to businesses in 2011, an increase of 28% from a year earlier. It also raised $1 trillion of capital for clients and continued to rank number one in global investment banking fees for 2011.

“We maintained our fortress balance sheet, ending the year with a strong Basel 1 Tier 1 common ratio of 10%,” CEO Jamie Dimon said in announcing the results. Regulators use Tier 1 capital as the core measure of a bank’s financial strength. It comprises common stock and reserves, or retained earnings, but may also include certain types of preferred stock.

“All of the firm’s [JPMorgan Chase’s] accomplishments and our success in the future rest on a foundation of capital strength and careful stewardship of the firm through this challenging economy and a new, complex regulatory environment,” Dimon says. The provision for credit losses was $779 million in the fourth quarter of 2011, a decrease of $1.6 billion from the same period a year earlier. The bank reduced its net allowances for loan losses by $230 million, although estimated loan losses from credit-impaired loans acquired from Washington Mutual were higher than expected. “As the economy continues to recover, we are gratified to see signs of improvement in loan demand and credit quality,” Dimon says. 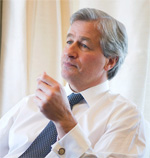 "Our success in the future rests on a foundation of capital strength and careful stewardship of the firm through this challenging economy and a new, complex regulatory environment"

JPMorgan Chase provided $252 billion of credit to consumers last year and issued new credit cards to 8.5 million people. The bank also added more than 18,000 jobs to the US economy in 2011, including employment for more than 3,000 military veterans.

HSBC Bank Bermuda, the largest private employer in this British overseas territory, has remained resilient in the face of a weak economy. It provides banking, trust and asset-management services to clients worldwide, as well as traditional banking services for Bermuda residents and businesses. Founded in 1889, the former Bank of Bermuda was acquired by London-based HSBC in 2004.

The ministry of finance estimates that Bermuda’s economy contracted by 1.5% to 2.5% in 2011. The lingering effects of the global economic and financial crisis continue to affect the country’s tourism industry, which is second to financial services in importance. The vast majority of tourists arrive from the US.

Historically low interest rates also have had a dampening effect on the local economy. The low rates mean that investment returns of insurance companies domiciled in the country are not as high as they once were.

Royal Bank of Canada (RBC), one of the country’s biggest banks, earned $1.9 billion in its fiscal first quarter, ended January 31, 2012. That was down 6% from a year earlier, due mainly to lower trading results in the capital markets division and weakness in international banking. However, earnings rose 17% from the fourth quarter of fiscal year 2011 and easily beat analysts’ expectations.

The bank continues to generate strong core earnings from its Canadian banking, insurance and wealth management businesses. The Canadian retail bank earned a record $826 million, up from $769 million last year. RBC took a loss last year on the sale of its US banking operations to PNC Financial Services. However, it did not rely on lower loan-loss provisions to boost its earnings. RBC announced a 6% increase in its quarterly dividend on March 1, 2012, the second increase in less than a year.

The strength of the domestic banking franchises of Canada’s banks demonstrates that the Canadian economy is relatively strong, economists say. Combined earnings of Canadian banks rose 12% in the three months through January 2012, compared with the same period a year earlier.

However, as this issue was going to press a shadow was cast over RBC’s stellar reputation as US regulator the Commodity Futures Trading Commission announced a lawsuit against the bank over alleged illegal “wash trades”: The bank purportedly entered into trades with itself in order to reap tax benefits. The outcome of this action remains to be seen.

JPMorgan Chase opened 260 new branches last year and originated more than 766,000 mortgages. The bank’s business lending increased 28% in 2011 to $545 billion, and its loans to small businesses in the US rose by 52% to $17 billion, keeping it in the top position in this category.

Meanwhile, J.P. Morgan has emerged in recent years as one of the leading investment banks globally, helped by its acquisition of Bear Stearns in 2008. J.P. Morgan earned more investment-banking fees than any other institution for a third straight year in 2011.

“JPMorgan Chase has a positive impact on the lives of millions of people and the communities in which they live,” Jamie Dimon, chairman and CEO, said in announcing the bank’s fourth-quarter earnings. The bank supported its communities with $68 billion of capital raised and credit provided to more than 1,200 nonprofit and government entities, including states, municipalities, hospitals and universities, in 2011. It also donated $275 million to nonprofits.

JPMorgan Chase’s returns on common equity were 11% for the fourth quarter and 15% for the full year 2011. “We believe these returns were reasonable, given the environment, although the return for the fourth quarter was modestly disappointing,” Dimon says. The bank’s credit reserves stood at $28.3 billion at the end of last year, with a loan loss coverage ratio of 3.35% of total loans. Total deposits of $1.1 trillion were up 21% from the prior year.