Following a year that included some of the biggest scandals in banking history—the London Whale, the Libor rate-fixing scandal, widespread money laundering, insider trading, rogue trading and outright fraud—it is reassuring to focus on the positive side of the financial services industry. In our 20th annual survey, Global Finance has identified the best banks in 136 countries and eight regions of the world. These are the banks that put their customers first and help them to succeed in a still-challenging global economic environment. 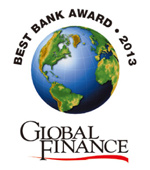 In North America, Canada’s strongly capitalized and well-managed banks have continued to prosper—although a few have seen ratings downgrades. US banks have benefited from improved asset quality and an incipient housing recovery. Loan losses have begun to recede.

In Europe, however, the sovereign debt crisis and lack of economic growth continues to weigh on the banking industry. It is unclear whether the bailout of Cyprus means that large depositors will be forced to bear part of the costs of future bank rescues elsewhere in the eurozone.

In the Middle East, banks are performing quite well, and oil-producing countries’ economies are growing strongly. Islamic finance is in persistent demand. Africa’s banks are leaping ahead with the introduction of mobile-banking systems in previously unbanked rural areas. The continent’s natural resources are attracting growing investment from Asia, where economic growth remains respectable.

More than five years after the start of the global financial crisis, a number of regulatory reforms are under way to make the financial system safer. The fact remains, however, that there is no global regulator and that central banks have kept the system afloat with easy money. It remains to be seen if the system can stand on its own once this support is removed.

Now more than ever, customers must depend on trustworthiness and excellence in execution from their banking partners. In selecting the world’s best banks, we relied on input from industry analysts, corporate executives and banking consultants, as well as research by Global Finance’s reporters and editors. Our criteria included knowledge of local conditions and customer needs, growth in assets, profitability, strategic relationships, staff experience, innovative products, competitive pricing, level of nonperforming loans and effective use of technology. The winners are not always the biggest banks, but rather, the best—those with the qualities that corporations should look for when choosing a banking partner.