Editor's Letter: The Effects Of Japanomics 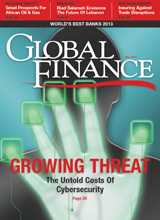 The extraordinary monetary moves of Haruhiko Kuroda, the new governor of the Bank of Japan, have dominated economic commentaries for the past few weeks. The bold measures—to stimulate the economy and fight deflation—coincide with the triumph of quantitative easing on a global scale. What is at stake is not just the economic future of Japan but the effects of its new monetary policy on advanced and emerging economies and their currencies. Japan’s target of achieving a 2% inflation rate within two years through “quantitative and qualitative easing” means doubling the balance sheet of the BOJ within that time to nearly 60% of GDP. Economists Betty Rui Wang and David Mann of Standard Chartered reminded us recently that it took nearly five years for the ECB to bring total assets to 30% of GDP and that the Fed has reached 20% of US GDP only after nearly five years of balance sheet expansion. Bonds will be bought at a monthly rate of 7.5 trillion yen ($76 billion). This is nearly three times the equivalent of the US Fed’s asset purchases. The announcement from Tokyo authorities has created strong moves in the currency markets, has immediately boosted the export potential of Japan and has probably forced other big central banks to reassess their strategy. But there are additional consequences—like the lower costs for corporate borrowers in Japan and the likely outflow of capital from institutional investors, probably toward emerging markets that can offer a relatively high return.

In this issue of Global Finance , the “Best Banks” awards are one of the most demanding and most competitive. We celebrate leadership and excellence, but often the winner in a single country is only slightly better than other local banks or is the best in a delicate market environment. Concerning the cover story: Cybercrime has been a key concern of corporate executives for some time. Insuring against it is most probably the fastest-growing cost of corporations, and there is a strong reluctance on the part of executives to describe their strategies in this area. We hope to start a dialogue with our readers on this topic.