The New York Stock Exchange and the Mexican Stock Exchange were the top exchanges for initial public offerings in the first quarter, according to research firm Renaissance Capital.

The once-sleepy Mexican exchange moved up in the rankings to edge past the London Stock Exchange, which had a number of successful IPOs from UK-based companies. “The historically active China A-share market did not produce a single IPO larger than $100 million for the second consecutive quarter,” Renaissance Capital says.

The NYSE was an easy winner, with 12 IPOs that raised $4.9 billion at a time when the stock market was setting record highs. The Mexican stock market has also set a series of new highs since last year, as foreign investors have been eager to buy. Led by Carlos Slim’s retailer Grupo Sanborns, which raised $829 million, Mexican companies raised $2.3 billion on the Mexican exchange in the first quarter. Grupo Sanborns operates coffee shops, restaurants and department stores in Mexico.

Poor stock market returns have dampened investor interest in the Greater China region, according to Renaissance Capital. Increasingly stringent listing regulations imposed by the China Securities Regulatory Commission have held back IPO issuance, it says. The Hong Kong Exchange raised about $800 million in the first quarter, the lowest level of IPO proceeds since the first quarter of 2009.

“With IPO returns outperforming and equity markets stabilizing, we expect to see a pickup in issuance for the remainder of 2013,” Renaissance Capital says. Global IPOs generated a 13% average return, led by the US, which accounted for seven of the top 10 best-performing IPOs in the first quarter, including Bright Horizons Family Solutions, a business-services provider, which returned 57% from its IPO. Norwegian Cruise Lines was another top performer, with a gain of more than 55%. Online and mobile money transfer company Xoom returned almost 44% in its Nasdaq OMX listing.

Renaissance Capital says a growing number of global companies are announcing their intentions to pursue an IPO. Notable upcoming IPOs include Everything Everywhere, a mobile network jointly owned by Deutsche Telekom and France Telecom, and Bangkok Mass Transit. The Milan bourse had its first IPO in almost a year on April 3, when journal and pocket-notebook maker Moleskine was listed. The company’s shares slipped 0.9% in their first day of trading.

In terms of number of deals, the Nasdaq OMX listed 18 IPOs in the first quarter, more than any other exchange. The technology sector in the US, which had seven IPOs in the first quarter, registered a first-day average return of 27%, the highest of any industry, according to PwC US. The US IPO market showed resiliency as the first quarter drew to a close, with 10 IPOs and $1.8 billion in proceeds raised in the second half of March, PwC says. “Increased pricing and public filing activity late in the quarter may portend an active IPO market in the second quarter of 2013,” the firm says.

In the DR market, BNY Mellon says it has been in talks with Indian authorities concerning the potential introduction of over-the-counter American depositary receipts that do not raise capital. The bank notes only 13 Indian companies have issued ADRs since the first program, for Reliance Industries, was established in 1992. “While it is clear the elephant can already dance, we think the time is right to learn some new steps,” says Neil Atkinson, head of BNY Mellon’s Indian DR business. According to the bank, there is significant international demand for Indian equity, but the number of ADRs available for India is extremely limited.

Gregory Roath, BNY Mellon’s Asia-Pacific head of DRs, says: “We are often asked, especially by US investors, to establish ADR programs for Indian companies but are restricted from doing so by current regulations. There is significant international demand for Indian equity in the form of DRs that cannot be satisfied via the routes now available.” 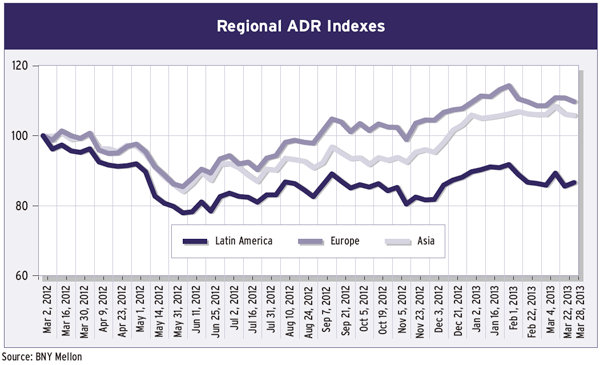