The euro slumped to a four-month low in the aftermath of the bailout of Cyprus, as market participants worried about the implications for other countries on the periphery of the eurozone. Although Cyprus is a unique case in many ways, the resolution to the crisis suggests some changes in how future cases will be handled, analysts say.

Spillover effects on other countries, as reflected in bond yields, were more limited than in previous episodes of turmoil, reflecting the relatively small scale of Cyprus’s problem, according to the Institute of International Finance (IIF) in Washington. “That said, however, Cyprus came closest of any country to date to leaving the euro in a disorderly fashion,” the global association of financial institutions said in a report.

“In our view, investors would be well advised to see the outcome of Cyprus both as a reflection of how future stresses will be handled (support sovereign creditors, haircut bank creditors) and a reminder that efforts to shift the liabilities associated with legacy bad bank assets in both Spain and Ireland onto the ESM [European Stability Mechanism] balance sheet are unlikely to be successful,” the IIF says. This new approach is likely to put funding stresses on banks in weaker economies—especially Portugal, Spain and Italy—it adds.

Marc Chandler, global head of currency strategy at Brown Brothers Harriman, notes: “The fallout from Cyprus, including the perceptions of increased vulnerability of other EMU [European Monetary Union] members, such as Slovenia, and the unresolved Italian political situation, dragged the euro down to new four-month lows.”

The euro came close to retracing its rally sparked by European Central Bank (ECB) president Mario Draghi’s comments in late July 2012, when he promised to do “whatever it takes” to preserve the euro. “There is some sense that Cyprus may be a turning point,” Chandler says. “We suggest that it is, as much as Greece, Ireland, Portugal and Spain have been turning points. This is how the situation evolves.”

EMU is still developing, he says. “Germany and the IMF have long pushed for bailing in investors, and they continue to press their case when the opportunity presents itself. It is never an all-out victory or defeat,” Chandler says.

LINE IN THE SAND

Alistair Cotton, senior analyst at Currencies Direct, a London foreign exchange broker and international payments provider, says: “The Germans, in effect, have drawn a line in the sand about no one leaving the euro. The ECB still has a fair amount in its locker. The eurozone needs debt mutualization and the banking union.”

It will take several years for the eurozone to complete this process, Cotton says. “Meanwhile,” he adds, “it will continue to lurch from crisis to crisis.”

Analysts at Barclays Research said in a report: “The worst-case scenario has been avoided in Cyprus, but we think the risks on the euro remain to the downside, due to the negative implications for the banking sector, political uncertainty in Italy and a sluggish growth outlook.”

The risk of contagion from Cyprus to other peripheral countries is contained because of the threat of the ECB’s policy response and a better-capitalized banking sector, Barclays says. “However, the bail-in of the banking sector with customer deposits is still likely to have some negative implications for the euro area banks, given the precedent it sets,” the bank adds. 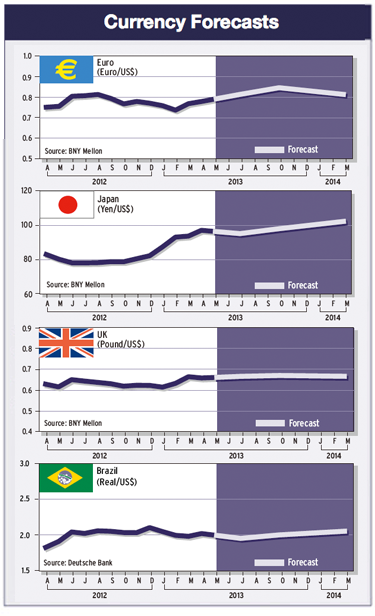