The falling yen is raining on Japan’s parade of overseas acquisitions, which had a record-breaking year in 2012, when the yen was rising. The first three months of 2013 constituted the slowest first quarter for M&A activity involving Japanese companies in the past 11 years, according to Thomson Reuters. 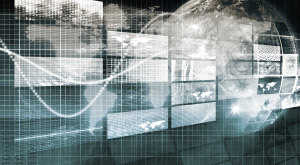 Japanese cross-border M&A activity totaled $9.4 billion in the first quarter, down 58.9% from the same period a year earlier. The yen fell to a three-and-a-half-year low in March on expectations of aggressive easing by the Bank of Japan to achieve a 2% inflation target and end nearly two decades of deflation. The yen declined for a sixth straight month in March, marking its longest losing streak in 12 years.

“The yen’s relentless fall from 75.8 to the dollar in October 2012 to 94.6 to the dollar in March appears to be the main catalyst in dampening the appetite [of Japanese companies] for overseas assets,” according to an analysis by mergermarket of cross-border M&A in the first quarter.

A single outbound acquisition—Orix’s $2.6 billion purchase of a 90% stake in Dutch asset manager Robeco from Rabobank—accounted for more than half of the total outbound value of Japanese M&A activity in the first quarter, mergermarket says.

While the jury remains out on the intermediate impact of  “Abenomics”—a mix of inflation targeting, fiscal spending, currency depreciation and monetary quantitative easing embraced by Japanese prime minister Shinzo Abe to stimulate private investment—its short-term effect on M&A involving Japanese targets or acquirers is apparent, according to a report by S&P Capital IQ Global Markets.

The volume of announced M&A transactions involving Japanese targets or acquirers was less than $19 billion in the first quarter of this year, compared with more than $66 billion in announced deal volume in the preceding quarter, S&P Capital IQ says. The largest Japanese target acquisition announced in the first three months of 2013 was Nippon Prologis REIT’s agreement in January to acquire 12 properties in Japan for approximately $2 billion.

Acquisitions of Japanese targets by foreign bidders decreased for the second successive quarter in the first three months of this year—the lowest level of inward investment since the second quarter of 2010, mergermarket says. “This underscores the poor fundamentals of the Japanese market, which failed to entice overseas bidders in spite of a sharp decrease in the value of the yen,” it adds.

Japanese outbound M&A deals totaled more than $110 billion in 2012, a record, according to Dealogic. That was 32% higher than in 2011 and represented the third consecutive yearly rise since 2009. The top nation targeted by Japanese buyers was the US, led by Softbank’s $34.6 billion bid for Sprint Nextel.

Several sizable domestic consolidations in Japan took place in the first quarter of 2013, most notably Hitachi Metals’ merger with Hitachi Cables, according to mergermarket. “These underscore the tendency of Japanese corporations to merge in order to enhance their competitiveness vis-à-vis overseas competitors,” it says.

Stiff competition in the semiconductor industry, especially from South Korea, has forced many Japanese chipmakers to cooperate. Fujitsu and Panasonic in February announced that they had signed a memorandum of understanding to consolidate the design and development functions of their system LSI (large-scale integration) businesses into a new company, enabling Fujitsu Semiconductor to cut 5,000 jobs. The state-run Development Bank of Japan is expected to help fund the new venture, which will operate under a fabless business model. It will design and develop LSI systems, while outsourcing the fabrication of devices to a specialized manufacturer.

Fujitsu and Panasonic have come to realize that bringing together their respective advanced technologies and customer bases is vital to build a competitive business globally, according to Morrison & Foerster, legal adviser to Fujitsu. The companies will concentrate new investments on high-performance servers and new technologies that support cloud infrastructure, as well as visual and imaging solutions. They also will focus on mobile and extremely low-power wireless connectivity solutions.

M&A deals in the rest of Asia, excluding Japan, totaled $45.8 billion in the first three months of this year, which was the slowest opening quarter in four years, mergermarket says. The total value of Asia-Pacific deals, excluding Japan, in the first quarter of 2013 was down 34.2% from the fourth quarter of 2012, “giving little confidence for investors in the region going forward,” mergermarket says.

Australian cross-border M&A in the first quarter of 2013 totaled $7.7 billion. Inbound investments into the consumer staples sector led the market with a 30% share. Outbound M&A activity was only $1.4 billion.

Currency movements are not always an important factor in determining M&A activity, but the size and speed of the yen’s depreciation has been exceptional and must be taken into account. 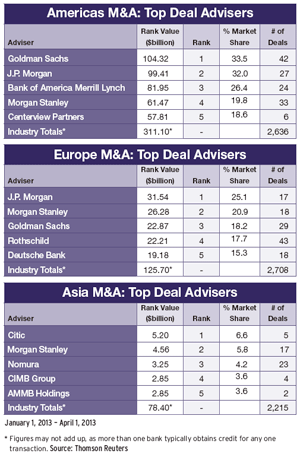