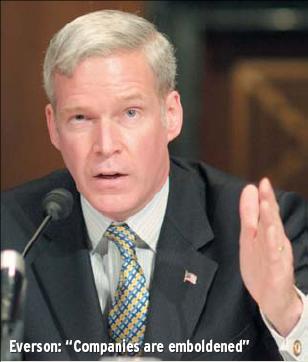 Frustrated by an Internal Revenue Service that cannot seem to catch corporate tax evaders and that fails to punish them when it does track them down, the US Senate Finance Committee held hearings in late October that highlighted one area of corporate governance that needs attention. As one witness after another made it clear, the use of abusive tax shelters by corporations is costing the US government billions of dollars a year.

Democratic senator Carl Levin of Michigan has drafted legislation that would prohibit accounting firms from selling tax shelters to corporate clients whose books they audit. Former treasury secretary Lawrence Summers suggested back in 2000 that the time had come for corporate lawyers and accountants to raise professional standards so that it is no longer ethical to help rich companies cheat on their taxes. As things now stand, auditors who refuse to go along with corporate tax-evasion schemes often lose their jobs.

Although Congress increased the enforcement budget of the Securities and Exchange Commission in the aftermath of the US corporate scandals, so far it has refused to give the IRS the money and the technology it needs to go after corporate tax cheats. IRS commissioner Mark W. Everson says the resulting sharp decline in high-profile prosecutions has emboldened more companies to hide profits in taxshelter schemes.

At a time when state budgets are stretched, the Multistate Tax Commission estimates that the widespread use of tax shelters cost states $12 billion in revenue in 2001. That would pay for a lot of health care, teachers and road repairs.