The company increased the number of shares offered to meet stronger-thanexpected foreign demand.

Braskem will use proceeds from the offering for general corporate purposes, including working capital and debt repayment.

The economic recovery in Brazil has boosted demand for the packaging materials and other petrochemical products that Braskem makes. Meanwhile, appreciation of the Brazilian real against the dollar has diminished the amount of Braskem’s dollarindexed debt on the books of local institutions. Braskem imports naphtha and makes raw materials that are used in the production of plastics.The company has 13 plants across Brazil with a total capacity to produce about 5 million tons a year of petrochemicals.

Of the total of 39.5 million new voting shares issued, 60% were placed outside of the country in the form of American depositary shares.

CPFL Energia selected Bank of New York as depositary. Each ADR represents three common shares.The ADRs trade on the New York Stock Exchange and the common shares trade on the Novo Mercado division of Bovespa in Brazil. CPFL Energia generates and distributes electricity to more than 5 million customers through its interests in various utilities in the states of São Paulo and Rio Grande do Sul.

The company also owns hydroelectric power plants and has a unit that trades wholesale power.

Tata Motors, India’s leading automotive manufacturer, upgraded its global depositary receipt program listed outside the US to an American depositary receipt program listed on the New York Stock Exchange. Ratan N.Tata, chairman of the Tata Group conglomerate, came to New York to ring the opening bell on the NYSE. “We are confident that the Company will benefit from the capital market access that this listing provides and from the adoption of the comprehensive corporate governance standards,” he said. Tata Motors is only the eighth Indian company to list on the NYSE. The company did not issue new shares or raise new capital as part of the NYSE listing. Citigroup Depositary Receipt Services continues to act as depositary. Tata Motors has more than 23 million outstanding American depositary shares, each representing one underlying ordinary share of the company.The ordinary shares are listed in India on the Bombay Stock Exchange and the National Stock Exchange. The aggregate value of the ADRs represents about 6.4% of the paid-in share capital of the company. The listing not only will give the automaker more visibility, but also will provide a platform for holders of the company’s foreign-currency convertible bonds to trade its shares.

JPMorgan Chase announced the launch in October of an American depositary receipt program for 51job, a

Shanghai-based company that operates an online recruitment and human resources business in China. The ADR program was launched in conjunction with 51job’s $84.5 million initial public offering. Each ADR is equivalent to two common shares.The ADRs trade on Nasdaq.The company plans to use the proceeds of the offering to upgrade its technology and for possible acquisitions.

Catlin Group, a UK-based property/casualty insurer, established a Level-1 American depositary receipt program in the US overthe- counter market. Each ADR represents two Catlin common shares as traded on the London Stock Exchange. Catlin selected Bank of New York as depositary. The company writes more than 20 classes of business insurance, including professional indemnity and general liability. It has a Bermuda-based reinsuranreinsurance subsidiary. Catlin says it already has a number of US shareholders, and the ADR program will raise its profile among US investors. 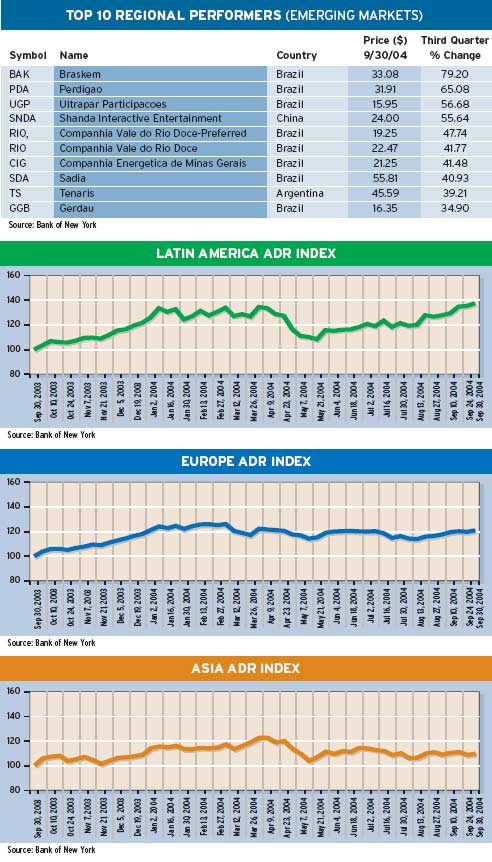