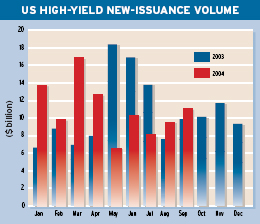 European issuers are making an increasing number of private placements in the US debt market to take advantage of low interest rates and to diversify their sources of funds, according to market participants. The private placement market in the US has emerged as an attractive al-ternative to public bond issues, in part because of the fewer reporting requirements and lower costs of selling directly to sophisticated investors, investment bankers say. At the same time, there is growing demand from US institutional investors for non-dollar-denominated issues, particularly in euros and British pounds.This enables non-US borrowers to avoid the cost of currency swaps by borrowing in their home currency. There has been a surge of cross-border corporate debt being placed privately in the US market in recent months, although the rising trend has been evident for several years. “Growth in the US debt private-placement market has been driven by non-US issuers who have sought to raise funds away from the public debt markets,” says Andrew Weiler, partner in the London office of law firm White & Case. A number of European companies have decided to raise funds through the US private debt market recently rather than through the public eurobond market, Weiler says. White & Case recently closed on three cross-border debt private placements in the US market totaling more than $1.2 billion. Germany-based Phoenix Pharmahandel, one of the largest wholesale pharma-ceutical distributors in Eu-rope, placed $205 million of dollar-denominated and €28 million in euro-denominated senior debt privately.