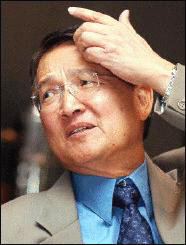 Rafael Buenaventu-ra, governor of the central bank of the Philippines, is one of the few repeat A-grade winners in Global Finance mag-azine’s annual Cen-tral Banker Report Cards. But this year, in our October is-sue, he got a B…and we heard from him. He was unhappy at our suggestion that he is not in com-plete harmony with President G loria Macapagal-Arroyo on how to tackle the country’s fiscal crisis—an impression that we share with many observers. “Actually, the president and I agree on key economic is-sues, particularly on the urgent need to implement a com-prehensive economic-reform program that will address the country’s fiscal deficit and sovereign debt load,” Buenaven-tura says. “Both of us are strong advocates for increasing government revenues to progressively reduce the budget deficit as well as government borrowings,” he says. Until the budget is balanced, however, the central bank chief says the Philippines will need to continue to tap the international markets to ensure it has sufficient foreign ex-change to pay for its maturing external obligations. “If the reserve level declines and exchange-rate pres-sures build up, it will be the government itself which will face the resulting higher cost of debt repayment,” Bue-naventura says. The Philippine peso has fallen to record lows, but ana-lysts say it could rebound if the country continues to pur-sue reforms (see story, page 49). Buenaventura argues that developing a domestic capital market is one of the government’s key medium-term goals. When that day comes, he says, the public and private cor-porate sector will be able to borrow at home, and the Philip-pines will be less vulnerable to foreign currency risk. Meanwhile, the country is facing austerity measures and higher taxes to help pay for a $56 billion debt load that was created in large part by former strongman Ferdinand Marcos.