By all rights, these should have been the glory days for the Japanese yen. The Nikkei average is trading at the highest levels in four years as foreign money flows into Japanese stocks. The economy is showing sustained growth, and Japanese monetary authorities are on the verge of declaring victory over deflation. Meanwhile, Prime Minister Junichiro Koizumi has won the mandate he needs to pursue structural reforms.

In recent months, most analysts have forecast that the yen would strengthen to around 90 to the dollar by the end of the year. Instead, the yen plummeted to a 16-month low in October of more than 114 to the dollar, and analysts rushed to downgrade their forecasts for the currency. What happened?

“The answer to the puzzle of the declining yen is largely an interest-rate story,” says Ashraf Laidi, chief currency analyst at MG Financial Group in New York. “Signs of strength in the US economy have made the Federal Reserve increasingly worried about inflation,” he says. “The Fed is firing on every cylinder to fight inflation.” The already significant yield advantage of US treasury notes over European and Japanese debt will increase, he adds.


The dollar is stronger in general against a range of currencies, and the same interest-rate profile of higher US rates is supporting the dollar against the euro, Lynch says.

In recent speeches, Federal Reserve governors and officials have revealed a distinct shift in their perceived risk of higher energy prices from a possible drag on growth to a potential inflation risk, Lynch says. As a result of these comments, market participants are increasing their Fed-tightening expectations, as revealed in the federal funds futures market, which in early October forecast the Fed’s key short-term rate to rise to a peak of 4.5% by the end of April 2006.

Meanwhile, the Bank of Japan is debating when to end its policy of quantitative easing, whereby it targets the availability of credit and floods the market with liquidity rather than aiming to achieve a specific interest-rate level. Toshihiko Fukui, governor of the Japanese central bank, says he does not entirely dismiss the possibility that quantitative easing could end before the beginning of the next fiscal year in April 2006.


Support for the dollar from higher yields remains finely balanced against the structural deterioration evident in the US current account balance, says Bankim Chadha, global head of macro foreign exchange research at Deutsche Bank. The dollar’s rally this year has been a counter-trend move and not a turning point in the longer-term trend toward a weaker dollar, he says. Worries about the widening US current account deficit will come to the fore again before too long, he adds.

“If interest rates tickle your fancy when it comes to currencies, then the near-term outlook for the dollar is quite good,” says David Gilmore, economist and partner at Essex, Connecticut-based Foreign Exchange Analytics. The US economy must slow, however, and the savings rate must rise in order for the trade balance to improve, he says. 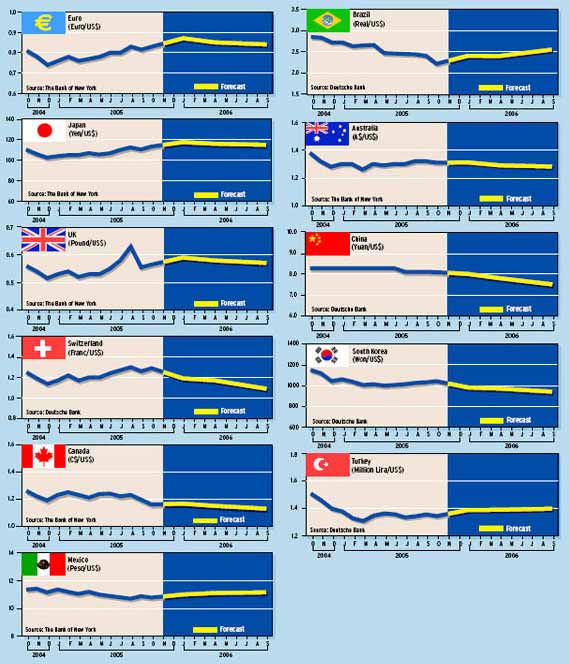