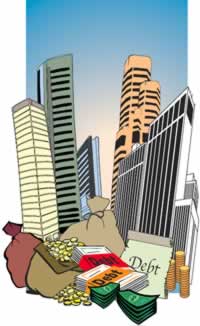 The rapid growth in global credit derivatives is putting stress on settlement systems and operational controls, despite significant progress in clearing a big backlog of unconfirmed trades, according to market participants, a rating agency and regulators. Credit derivatives and the increasing involvement of hedge funds in the market have spread the risk of defaults more widely throughout the financial system. How market participants will react to losses in the case of a major bankruptcy or credit event is a growing worry among both regulators and financial institutions.

Banks are using credit derivatives in new ways. Instead of just buying protection against loan losses, they are using these new instruments as trading vehicles and to take on new credit risks at a time of low yields. In effect, they are selling credit protection. Many large European banks are moving from net protection buyers to neutral positions, or even net protection sellers, particularly in the case of several British and Swiss banks, according to a survey released in September by Fitch Ratings.

“Growth in this market has been spurred by the demand for flexible trading and hedging tools, which has fostered the rapid development of indexes and ‘tranched’ products,” Fitch says. Tranched products slice credits into new instruments with varying levels of risk. Credit derivatives are linked to the probability that a company will pay its debts in full and on time.

Indexes and index-related products are the fastest-growing part of the business, increasing 900% in 2005 to $3.7 trillion, according to Fitch, which surveyed 75 financial institutions that account for the lion’s share of the market in these instruments. Index products allow investors to readily take on or shed credit exposure to a basket of US, European, Asian or emerging market corporate entities. Single-name credit default swaps, which are based on risks for individual companies, grew at a slower pace but still accounted for half of the market. The notional amount of outstanding credit derivatives contracts rose 122% last year to nearly $12 trillion.

Fitch’s survey identifies banks’ market-making activities as one of the main motivating factors driving their activity in the credit-derivatives market, whereas the rating agency’s first global survey four years ago cited risk mitigation as well as trading as the main reasons for using this market. The 18 insurance companies surveyed said they used credit derivatives as an alternative investment class as well as a risk-management tool.

Settlement problems following a credit event and the backlog of trades in general topped the list of most worrisome concerns of market participants, according to Fitch’s report. Concerns were also raised about pricing and liquidity. Price swings in the credit derivatives market in May 2005 following the downgrades of Ford Motor and General Motors caused hedge funds to lose more than $1 billion.

“Delphi and Dana [two auto parts suppliers that sought bankruptcy protection] highlighted the impact that market technical factors related to the settlement of derivatives contracts can have on pricing when physical settlement is specified and the amount of notional credit derivatives outstanding dwarfs the amount of deliverable bonds and loans,” says Krishnan Ramadurai, managing director in Fitch’s financial institutions group in London.

The development of an auction system to deal with credit events, which allows for cash settlement of index-related trades, is a positive development and will relieve some of this pressure, Ramadurai says. While credit losses to date have been minimal, the rapid growth of the market has caused operational stress for market participants. The Federal Reserve and other bank supervisors have held special meetings with major market participants to explore ways to improve the processes supporting trading and settlement. The Federal Reserve Bank of New York hosted a meeting with 16 banks on the issue on September 27.

“We’re in the midst of a period of rapid growth and innovation in the market for credit derivatives, and the developments in this market have important implications for broader financial market functioning and stability,” Timothy Geithner, president and CEO of the New York Fed, said in a speech in May at the Stern School of Business at New York University, which held its third credit risk conference. He said these new instruments have made possible substantial improvements in the way credit risk is managed and have spread risk more widely, making it easier to purchase and sell protection. There is still a lot we don’t know, however, about how these instruments and the increased role of non-bank institutions in these markets are likely to function in conditions of stress, according to Geithner.

Difficult to Predict Behavior
The direct counterparty credit exposure in over-the-counter derivatives is quite large relative to the capital cushions of the major banks and investment banks and relative to more traditional forms of credit exposure, Geithner said. These exposures are also harder to measure because of the complexity of the instruments and the imbedded leverage in many of the new products and the difficulty of estimating correlations across different exposures, he added. And it is even more difficult to predict how the behavior of market participants could change in times of crisis, as they react to losses and attempt to reduce their exposure to future losses, he said.

“Operational risk and infrastructure failures have played a prominent role in past financial crises, and the infrastructure risks that have characterized the credit derivatives markets since their inception are an ongoing source of concern,” Geithner said. The changes under way to clean up the backlog of unconfirmed trades and to automate post-trade processing will help reduce operational risk, but market participants need to make continued investment in risk management and infrastructure, the New York Fed chief noted.

The concentration of market-making activity within a limited number of banks raises concerns about liquidity being maintained in the event one of these banks exits the market, according to the Fitch report. However, it says this is unlikely to happen, given the commitment to infrastructure made by these banks and the amount of revenue they obtain from the credit derivatives market.

The relative concentration of market makers and counterparties also heightens the potential for liquidity disruptions across the industry, Fitch says. The market could be susceptible to a sharp unwinding of leveraged positions across multiple firms, for example. Or the use of common strategies and models could exacerbate any instability resulting from a rush to the exits, according to Fitch.

Standardized Format Eases Pain
The Bond Market Association in October published a final standardized format for versions of the monthly electronic trustee reports used in collateralized debt obligations, or CDOs. “Having one format for all CDO transactions rather than several different versions helps users better compare different deals and increases not only efficiency but also investors’ comfort with CDOs,” says Robbin Conner, vice president and assistant general counsel at the association. “We hope the standardized file is widely adopted, because making investors more comfortable with these products is integral to continued growth in the secondary market for CDOs,” Conner says.

There are 171 fields of information available for each piece of collateral held by the CDO, such as ratings, industry, region, balances and due dates. There are also data fields regarding the tranches that make up the capital structure of the CDO, as well as data on any transactions that have occurred during the reporting period. It is hoped that the standard format will allow market participants to more quickly and efficiently process the vast amounts of data that are provided in reports on CDO transactions.

The International Swap Dealers Association recently released a trade template for loan-only credit derivatives, which allow investors to take on or shed exposure to the most senior part of a company’s capital structure, composed of senior syndicated secured loans.

CBOE Options on Corporate Debt
Meanwhile, the Chicago Board Options Exchange is seeking to trade options on corporate debt in an environment that it says would remove worries about counterparty risk. In a comment letter filed with the Securities and Exchange Commission, the Bond Market Association said that the CBOE’s initial listing criteria should identify bonds with sufficient liquidity to support the trading and settlement of listed options and that the requirements for continued listing on the exchange should not be set so high as to risk frequent de-listing, which could disrupt the market.

“The association supports proposals that create additional risk management tools and enhanced liquidity,” says Mary Kuan, vice president and assistant general counsel at the association. “We offer some suggestions that we believe will help achieve such laudable goals,” she says.

If the CBOE’s proposed rule change is adopted, it will require changes and harmonization with rules of other self-regulatory organizations, such as the New York Stock Exchange, the association says. It has also requested clarification of position limit requirements, trading halts and specific terms of the corporate debt securities options.

The CBOE says market participants investing in corporate debt securities should have the opportunity to use exchange-listed options to mitigate risk.

NYSE’s New Bond-Trading Platform
As Global Finance went to press, the NYSE Group said it was prepared to launch its new corporate fixed-income trading platform, NYSE Bonds, as soon as it received SEC clearance. The new platform, if approved, will include the corporate bonds of all NYSE-listed companies and their subsidiaries, without the companies having to list each bond issued. This would expand the number of eligible bonds from 1,000 currently to nearly 6,000.

The platform will focus on the secondary market, with trading taking place on NYSE Arca, the successor of the Archipelago electronic exchange NYSE acquired in March. The exchange will conduct two daily bond auctions at 4:00 a.m. EST and at 9:30 a.m. EST. Orders not executed at either auction become eligible for continuous trading immediately.

This article appeared in issue December 2006