With global stock markets falling sharply in early October, a fourth-quarter rebound in IPOs appeared unlikely. “To the disappointment of many US underwriters, there was no post-Labor Day boom in the equity market as seen in previous years,” Thomson Reuters said in a report on equity capital markets in the third quarter. Market conditions were deemed hazardous, it said.

Banks seeking to raise additional capital to offset rising loan losses or to fund acquisitions bolstered equity capital market volume, despite the dearth of IPOs. US equity capital market proceeds totaled more than $191 billion in the first nine months of 2008, a rise of 14.2% compared to the same period a year earlier. However, the number of deals fell by 43.2%.

Bank of America raised $10 billion on October 7, a day on which its stock price dropped by 26% following the announcement of worse-than-expected earnings and a dividend cut. Two weeks earlier Goldman Sachs raised $5.7 billion from investor Warren Buffett’s Berkshire Hathaway. Before then, J.P. Morgan raised $11.5 billion.

Despite the decline in global issuance, the Saudi Arabian market experienced a 162% increase in equity issuance in the first nine months of 2008 compared to the same period a year earlier. The Saudi stock exchange also had the third-highest number of new listings, with six IPOs in the first three quarters of this year. Saudi Arabia, helped by oil profits and a government focused on diversifying its economy, was the only country to experience an increase in total proceeds in the third quarter, according to Greenwich, Connecticut-based Renaissance Capital. Soaring gold prices helped Saudi gold miner Ma’aden complete a $2.5 billion IPO, the largest of the third quarter.

“While the recent re-capitalization of market bellwethers General Electric and Goldman Sachs may shore up confidence in the equity markets in coming months, we do not foresee a full recovery of the IPO market until returns improve significantly,” Renaissance Capital said in a report on its IPOhome.com website. “This will require that underwriters price deals conservatively and that management teams lower internal valuation expectations,” it said. 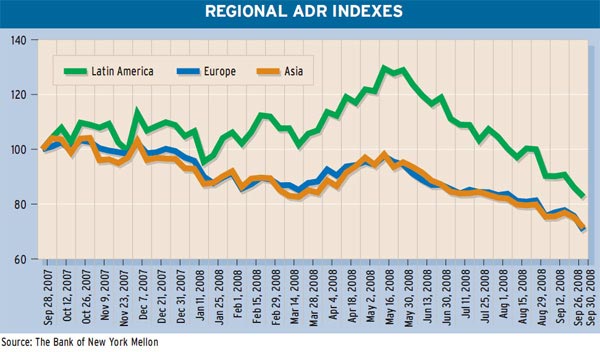