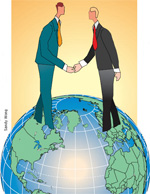 Worldwide announced mergers and acquisitions in the first three quarters of 2008 declined by 25% from the same period a year earlier, according to Thomson Reuters, reflecting the effects of the credit crunch and a slowing global economy. The decline would have been considerably larger had it not been for a wave of mergers in the troubled financial services industry itself.

The middle market has been less affected, however, and some corporations are taking advantage of the less competitive merger environment to acquire attractive assets in a wide range of industries. “Strategic buyers with strong balance sheets are coming back to the table,” says Mathias Schumacher, managing director at Duff & Phelps, based in London. The buyers are being attracted by lower prices and less competition, he says. In the past, private equity investors outpriced corporate buyers, he notes.

Duff & Phelps provides independent financial advisory and investment banking services, principally in the areas of valuation, M&A; transactions, financial restructurings and disputes. “The topics of discussion have changed in recent weeks as financing has become more difficult to get, with lenders focusing on impairment risks for past investments,” Schumacher says. “There likely will be a cooling down period for leveraged acquisitions before the big deals return,” he says.

The private equity industry is restructuring and adapting to a changed situation in which financing is harder to obtain, according to Schumacher. “The club deals, which are highly leveraged, are not happening at the moment,” he explains.

M&A; activity is shifting to the middle market as a result of the credit crunch and worsening economy, says Mitchell Ames, partner at Pepper Hamilton, a New York-based law firm that advises on such transactions. “The tightening of the credit markets and the resulting sharp decline in high-leverage megadeals have shifted much of the M&A; activity to transactions with a value of under $500 million,” he notes. The trend toward smaller, easier-to-finance deals is likely to continue, he says.

Running a successful business requires solid planning and the timely execution of strategic initiatives, including acquisitions, according to the Transaction Services group at PricewaterhouseCoopers. The firm’s mid-year M&A; forecast for 2008 predicted that regulatory factors could drive a further increase in middle-market deals before the end of this year. One such factor is anticipation of a possible increase in the capital gains tax with a change in the US administration, which could motivate private equity firms to cash out by the fourth quarter.

New Accounting Standard
The new business accounting standard, FAS 141(R), will no longer allow certain transaction costs to be capitalized into the purchase price, instead requiring them to be expensed. Changes in how companies account for noncontrolling interests or minority investments under FAS 160 could cause some firms to take control of their minority interests before being required to record them in equity when the new rule takes effect, starting for some companies in 2009, according to PricewaterhouseCoopers.

Continued instability in the financial services industry, however, continues to hamper deal activity. In the current credit market, where access to syndicated loans to finance large transactions is limited, private equity firms look for alternative ways to deploy capital, focusing on distressed investing and partnering with corporate buyers and minority interests.

Mergers and acquisitions in consolidating industries, such as automotive, consumer products, energy, financial services, manufacturing, technology and retail, are fueling some activity. “In the current economy, companies are re-evaluating their business or portfolio to dispose of assets that are not strategic or core,” says Bob Filek, a partner in PricewaterhouseCoopers’ Transaction Services.

In particular, consumer products companies are shedding assets and disposing of non-performing brands, Filek says. “The retail industry is already in the process of selling distressed assets,” he says. “If you look across all industry sectors, whether corporate or private equity, everybody is assessing their core competencies and doing transactions that make them lean, nimble and more competitive,” he adds.

Dispositions offer strategic industry participants and international buyers opportunities to consolidate, gain scale and access new markets, according to Filek. “Acquisitions done in challenging times such as these consistently rank at the top of transactions with the best returns,” he says. However, given the credit and economic uncertainty, rigorous due diligence and detailed scenario and downside risk modeling are a must, he adds.

Private equity firms and sovereign wealth funds remain a source of capital, not only for cash-starved banks but also for distressed assets. “Sovereign funds will remain active in M&A; as investors, but they might not take a controlling interest,” says Schumacher of Duff & Phelps. “The appetite for new financial instruments is just not there,” he says. “Future M&A; financing will be straightforward and transparent. The innovation will come in getting your financing plans approved,” he predicts.

As interest grows in middle-market deals, private equity and strategic buyers will do well to focus their sights on what makes these deals unique if they want to increase their success in bidding for and completing them, says Ames of Pepper Hamilton. Middle-market transactions frequently involve founders or family operators who are key to a private equity target’s success and growth, he says.

Sensitive Handling
“It is important to match the financial expertise of the investor with the operating expertise of the owner-operator with sensitivity, whether it involves the introduction of a new finance officer, the addition of debt to the target’s balance sheet or the creation of incentive-based compensation plans where there were none,” Ames says. “Most important, because add-on transactions are so crucial in the middle market, the ability to complete them quickly and in a cost-efficient manner with positive effects on the target’s balance sheet and P&L; [profit and loss] statement takes deft handling,” he says.

Meanwhile, the wave of consolidation that swept across the financial services industry in the third quarter helped to keep the value of deals nearly on a par with the same period a year earlier. Worldwide mergers and acquisitions that were announced in July through September 2008 totaled $907 billion, a 1% decrease from the second quarter and down only slightly from the third quarter of 2007, according to Thomson Reuters.

Bank of America’s $48.8 billion acquisition of Merrill Lynch in a stock-swap transaction was the largest announced merger in September and in the third quarter of 2008. The biggest deal in Europe in September was Lloyds TSB’s $23 billion acquisition of rival UK bank HBOS. Financial M&A; volume in the third quarter totaled $214 billion, representing a 90% increase over the second quarter of 2008. 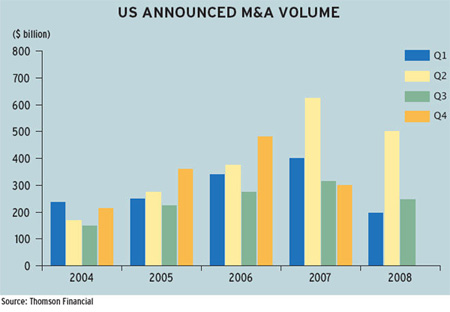 Deals Fall Apart
The credit crunch and reeling financial markets were also blamed for the failure of a number of proposed deals to be completed. British bank HSBC Holdings canceled a $6 billion agreement to purchase a controlling stake in Korea Exchange Bank from US private equity group Lone Star Funds. HSBC said it exercised its right to terminate the acquisition agreement due in part to current asset values in world financial markets.

“In light of developments around the world, not least changes in asset values in world markets, we do not believe that it would be in the best interests of shareholders to continue to pursue this acquisition on the terms negotiated last year,” Sandy Flockhart, chief executive of HSBC Asia and an executive director of HSBC, said in a statement.

Anglo-Swiss mining group Xstrata canceled its proposed $10 billion takeover of South African platinum producer Lonmin on October 1, blaming the credit crunch and unprecedented uncertainty in financial markets. Xstrata, based in Zug, Switzerland, said the requirement to refinance a significant portion of the acquisition debt facility would be on terms that would not be in its best interest. Xstrata did purchase an additional 14.2% stake in Lonmin, bringing its holding up to 24.9%.

“Private equity firms, with limited access to the global credit markets, continued to see major declines in M&A; activity during the first nine months of 2008,” according to a report by Thomson Reuters. With only $227 billion in announced deals in the first three quarters of this year, the volume of financial-sponsor-backed deals reached its lowest level since the first nine months of 2004 and was down 70% from the same period of 2007. 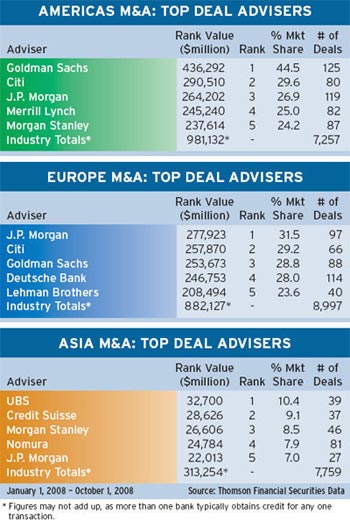 Asia Registers Gain
On a regional basis, M&A; activity in Europe declined 29% from the same period a year earlier in the first nine months of 2008, while deals in the US declined 27% and deals in Japan fell 38%. Asia-Pacific volume rose by 1% and was the only region to show an increase during the first nine months of 2008 over the same period of 2007. The Asia-Pacific region’s total was bolstered by robust deal activity in Australia and China.

The total volume of investments by sovereign wealth funds totaled $42 billion during the first nine months of this year, compared to nearly $43 billion in the same period of 2007.

Cross-border deal activity totaled $1 trillion during the first nine months of 2008, down 28% from the same period a year earlier, and comprised 41% of worldwide volume. Target companies in the US, Britain and Canada accounted for nearly half of overall cross-border activity.