Morgan Stanley edged out Goldman Sachs as the top financial adviser on mergers and acquisitions worldwide in the first three quarters of 2009, as M&A; activity declined 38% from the same period a year earlier, according to Thomson Reuters.

Meanwhile, Kraft Foods’ unsolicited $19.3 billion tender offer to acquire Cadbury, the UK-based candy maker, raised hopes that the long drought in deal activity could be nearing an end. The future of the deal was thrown into doubt, however, after Cadbury rejected the offer as too low.

Bruce Wasserstein, chairman and CEO of Lazard, was advising Kraft on the deal when he died in October. Wasserstein was a leading figure during the hostile takeover wave of the 1980s. He advised Kohlberg Kravis Roberts (KKR) on its takeover of Nabisco, which was the subject of the book and film, Barbarians at the Gate.

Recent rallies in the equity markets, coupled with improved conditions in the credit markets, have led to a recent increase in deal activity, according to Sola Akinola, head analyst for the Americas at Mergermarket. “There has been a marked increase in hostile bids, as well as contested deals, as everyone tries to get their hands on the best assets at the cheapest price,” Akinola says.

The majority of hostile deals so far this year have taken place in the United States. The predominance of US-based deal activity has pushed US law firms into the leading positions in Mergermarket’s thirdquarter league tables, led by Skadden Arps, Simpson Thacher and Sullivan & Cromwell.

The financial services industry led deal activity by sector in the first nine months of 2009, followed by energy and power, materials, and healthcare, according to Thomson Reuters. M&A; activity in the US declined 46% from the same period a year earlier to $601 billion, while Canadian M&A; deals fell by only 5.9% to $94 billion.

Bankruptcy-related acquisitions of US targets increased by 559% from a year earlier to $67 billion. This was largely due to General Motors’ $55 billion asset sale to the US Treasury, the Canadian and Ontario governments, and the United Auto Workers’ Voluntary Employee Beneficiary Association trust.

The healthcare sector was the most heavily targeted sector in the US during the first three quarters of 2009, with $160 billion in M&A; deals. The financials sector was second, followed by industrials, high technology, energy and power, consumer staples, materials, and media and entertainment. 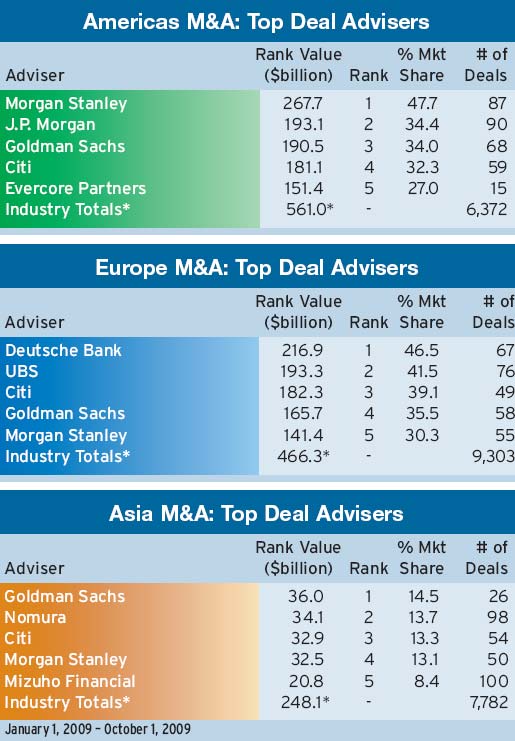