Investment into—and out of—Asia bucked the global trend over the past year as China and India continue to power the region’s economic progress. 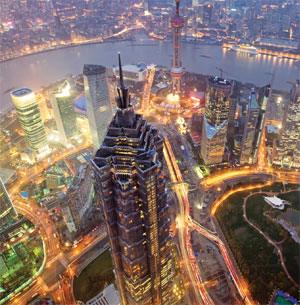 The past year has been a challenging one for companies seeking out international partnerships. Global foreign direct investment (FDI) inflows fell to $1.7 trillion last year, down from a record high of $1.98 trillion in 2007, and are expected to register at only $1.2 trillion this year, according to the United Nations Conference for Trade and Development (Unctad). Asia has not been immune, with capital outflows destabilizing equity markets and exchange rates and with foreign companies freezing new investments and selling off assets.

Still, the region has fared better than most and actually managed to post a 17% growth in FDI inflows last year. Investment will likely drop off this year, but several countries in the region remain popular destinations for investment. Unctad’s World Investment Report points out that China became the world’s third-largest FDI recipient last year while India rose to the 13th most popular. According to survey results published in the same report, executives at transnational companies ranked China and India first and third, respectively, among the most attractive FDI destinations.

The report concludes: “Against the backdrop of the global financial crisis, the ability of these two largest emerging economies to attract FDI has reshaped the landscape of global FDI flows. Inflows to the two are inevitably affected by the crisis, but their medium- to long-term prospects remain promising.”

Chris Runckel, president of US-based Runckel & Associates consulting firm, believes the momentum is already starting to pick up again. “The first six months of the year were miserable, with most companies shelving projects and little movement on investment,” he comments. “This is changing. Our company is seeing an increase in activity, with companies now coming to us and asking to restart projects that had been allowed to become dormant, or to start totally new projects.”

The interest in investment in Asia comes not only from traditional sources such as the United States, Europe and Japan but from other countries in Asia as well. China’s outbound FDI topped $50 billion last year, a 132% increase over 2007. Outflows continued to rise in the first part of 2009. India’s outbound FDI remained stable last year, but its relative importance increased as investment activity globally cooled.

Increasingly, though, outbound investment is flowing to other parts of Asia. Asian countries have reduced or eliminated FDI limits and streamlined approval processes. The region produced 19 bilateral investment agreements, 13 double-taxation treaties and 10 other trade and investment agreements in 2008. In terms of making such agreements, Asia was the most active developing region in the world. The momentum has continued this year, with the Association of Southeast Asian Nations (Asean) and India signing a free trade agreement (FTA) in August.

Runckel says such agreements are also important in attracting investment from Western companies. “We are seeing a lot of companies looking for locations that can service the region,” he says. “Companies want to build not only for export but also for the potential capacity to supply the Asian market. Looking at the recent Asean-India FTA, for example, with Asean’s 500 million people and India’s 1.2 billion, companies that supply both markets can more easily find a niche, even though the standard of living is not that high yet.”

Glen Robinson, vice president of M&A; for consulting firm Celerant, believes that high-equity valuations for Asian companies put them in strong positions to partner with overseas companies. “Because of the fast-growing markets, Asian equity prices have a premium written into the valuation,” he explains. “Equity-based transactions then have clear advantages for Asian companies compared to Western companies, many of which are struggling right now from an equity position.”

A recent study of global chemical companies conducted by Robinson’s team concluded that high fragmentation and low capitalization in Asia’s chemical industry makes the region particularly attractive for investment. The study also found that Asian chemical companies on average had significantly lower return on capital than their Western counterparts. Some less efficient Asian companies can benefit by partnering with a Western company with more streamlined operational and financial processes, Robinson believes. Efficient Asian companies can find even more potential investments, he adds, as their market valuations and stronger cultural connectivity offer advantages over Western buyers.

Asian buyers are also less likely to face government resistance. Some inbound and outbound Asian investments have failed in recent years after government regulators rejected proposed partnerships over sovereignty issues. Earlier this year the Chinese government rejected US-based Coca-Cola’s proposed acquisition of Huiyuan Juice Group. The government charged that the deal violated a new anti-monopoly law, despite the relatively limited portions of the juice market held by the two companies.

The situation is even more complicated for outbound investment. State-owned companies and government-run sovereign wealth funds are active investors in Asia. Such entities, because of their relationship to the government, are more likely to face resistance in their foreign acquisitions, especially those in sensitive sectors. As an example, the proposed purchase of US oil company Unocal by a Chinese state-owned company failed in 2005 after the US congress rejected the deal over national security concerns.

Josephine Chow, Asia Pacific leader of M&A; for consulting firm Watson Wyatt, thinks that the current global economic climate has softened resistance to such deals. “Sovereignty issues have become less important in the past year as capital has tightened in overseas markets,” she says. “Policymakers and the public have to face the facts: New investment means fewer job losses.”