Bernanke Heads Off Big Attack On Dollar With Rate-Hike Talk

The dollar has lost 12% against a basket of currencies since President Barack Obama took office in January, but selling of the greenback has been orderly, and there is no dollar crisis, analysts say.

“Current dollar selling may not be described as disorderly, as the currency [dollar] remains about 8% above its all-time lows against the euro and in trade-weighted terms,” says Ashraf Laidi, chief market strategist at London-based CMC Markets. Dollar sentiment among market participants remains extremely negative, however, and the buildup of positions against the greenback in the futures markets could easily accelerate the pace of the dollar’s decline, he says.

The climb in “short” positions among speculators to the highest level in more than a year is one reason that US administration and Federal Reserve officials have launched a verbal campaign in support of the dollar, Laidi says. “Fed officials are seizing every opportunity to state their intention to normalize interest rates when the time is right,” he notes.

Of course, it is the Treasury’s responsibility and not the Fed’s to decide US dollar policy. “It is very important to the United States that we continue to have a strong dollar,” Timothy Geithner, Treasury secretary, says. The Obama administration recognizes the dollar’s important role in the global financial system, he says, and it will do everything possible to sustain confidence in the dollar.

“The dollar’s extensive role as a reserve currency allows the US Treasury to pay a lower interest rate on its liabilities than other borrowers,” says Marc Chandler, global head of currency strategy at New York-based Brown Brothers Harriman.

“The strong-dollar policy signals the forswearing of using the currency as policy tool or weapon,” Chandler says. “This is important for the creditors of the world’s largest debtor.”

However, the strong-dollar policy does not prevent the dollar from falling as a consequence of the pursuit of other policies, such as an accommodative monetary policy to help reflate the economy, Chandler says. “An economic recovery sufficiently strong to prompt the Fed to normalize monetary policy may see that the confidence has not been irretrievably lost, as some fear,” he says.

Since 1954 the Fed has only begun raising rates after unemployment peaked, according to Chandler. Two other central banks, those of Israel and Australia, have already raised rates, and neither country may have experienced a peak in unemployment, he says.

By raising rates on October 6, the Reserve Bank of Australia has potentially started a gradual shift in foreign exchange market participants’ focus back toward interest rates and away from risk appetite, according to analysts at Barclays Capital. While correlations between the stock markets of the major industrialized countries and the foreign exchange market remain strong, these correlations are expected to decline over time, the analysts say.

“The speed and style of the Fed’s exit strategy are likely to be key issues for the dollar over the next few months,” according to Barclays Capital. The Fed will likely start draining reserves before raising interest rates, it says.

Central banks in South Korea, Taiwan, the Philippines, Thailand, Indonesia and Hong Kong intervened heavily in October to slow the dollar’s decline against their currencies. With China’s renminbi pegged to the dollar, the other Asian central banks are seeking to defend their export competitiveness.

The Reserve Bank of Australia will be hard pressed to continue raising interest rates alone, short of taking its currency to levels that may make China look elsewhere for the minerals it normally buys from Australia, says David Gilmore, partner and economist at Foreign Exchange Analytics, based in Essex, Connecticut.

The US dollar is back to where it was before the global financial crisis, Gilmore says. “The dollar is not significantly undervalued or overvalued,” he says. “Asia is where the misalignments are in foreign exchange and, to a lesser extent, Latin America.”

Inflation risks will be real in Asia much sooner than they are in the US, Europe or Japan, Gilmore says. “Asian economies scream out for currency revaluations,” he says.

The International Monetary Fund, the Bank for International Settlements and the Group of 20 should consider limits on government foreign reserve accumulation, Gilmore says. “A sizable chunk of the world’s savings is in foreign reserves held by central banks that actively manage their currencies,” he says. “In light of the need for risk capital in the world to fill [the gap left] by the massive withdrawal of private risk capital, having all these global savings (FX reserves) in cash and government paper is hugely inefficient on top of being distortionary,” he adds.

The impending economic recovery will fuel import demand, causing renewed deterioration in the US trade deficit next year, says Michael Woolfolk, senior currency strategist at BNY Mellon. “Notably, we may already be seeing the leading edge of this process, as the bilateral deficit with China has returned to the $20 billion per month territory, aided by a very competitive exchange rate,” he says. The bilateral deficit with China reflects a full two-thirds of the total US trade deficit, he notes.

Despite the handwringing about the US trade deficit and the deindustrialization of America that it represents, the US remains the world’s largest manufacturer, says Chandler of Brown Brothers Harriman in his new book, Making Sense of the Dollar: Exposing Dangerous Myths About Trade and Foreign Exchange. The system of trade accounting no longer accurately reflects how the global political economy works, Chandler says. It does not fairly count the money that US companies make from their global operations, he says.

“Companies, individuals and nations become great because they invest in the future, often using other people’s money,” Chandler writes. “Capital flows are larger and more important than trade, making measurements that exclude capital flows a distortion of international economic relations.”

The value of the dollar is a function of all of the reasons why people want to buy and sell the dollar, whether for trade, business expansion or investment, he says. 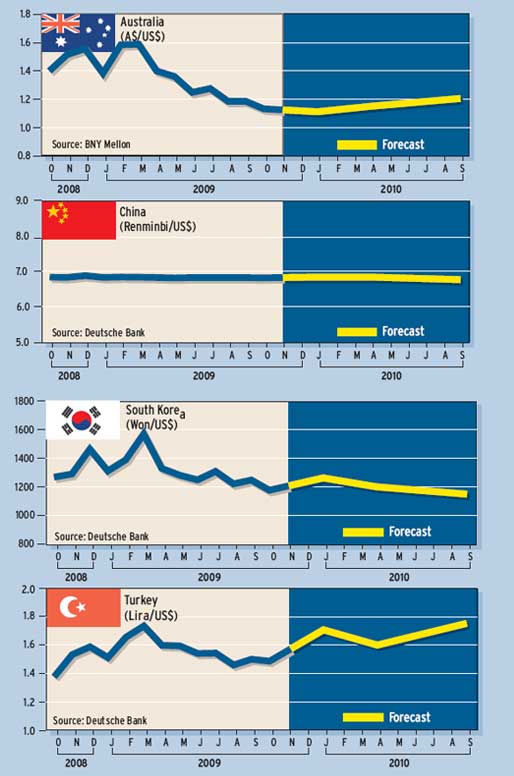