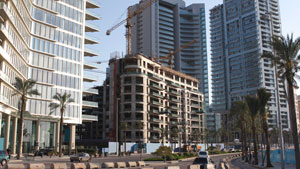 Winston Churchill once famously described Russia as a riddle wrapped in a mystery inside an enigma. Just how, one wonders, might he have described Lebanon in 2010? In late September local headlines were filled with the latest dizzying twist in the country's endless political drama as the governing coalition of national unity clung on amidst fears of a resumption of sectarian violence. Late night meetings, compromises and low-key intervention from Saudi Arabia's King Abdullah all, reportedly, saved the day, although the deterioration in relations between Beirut and Damascus has dismayed observers. Unsurprisingly, the crisis reaffirmed Lebanon's reputation for political instability; in a recent World Bank survey it ranked 194 out of 213 countries, and 147th for government effectiveness.

As well as political heat, Lebanon endured a broiling summer made worse by the woefully unmodernized electricity system. During the hottest months, power cuts even in Beirut were commonplace, while some rural areas had power for just six hours a day, amidst reports of widespread electricity theft.

Yet this same country has been one of the big winners of the global economic downturn, with GDP for 2010 expected to grow by some 8% over 2009, despite a slight weakening expected in the second half. This is on top of GDP growth of 9% last year, with the financial sector, real estate and tourism all fueling the activity. Industrial exports have been rising too, up some 32% year-on-year in August to $262 million.

Despite the country's turbulent image, "The growth rate has been very high due to the political stability and increase in capital inflows, whilst inflation has stayed under control," the resident IMF representative Eric Mottu told a conference of leading businessmen in late September.

So how does one begin to unwrap this paradox?

Key to this benign economic picture is the 2008 Doha Agreement between the country's many rival factions, including pro-Western parties and Hizbollah. This led to the respected presidency of Michel Suleiman and the 2009 elections, won by a coalition headed by prime minister Saad Hariri.

Fortunately, the Doha accord appears to be holding, despite September's tensions, aided by a marked improvement in relations between Saudi Arabia and Syria. The business community remains optimistic that current tensions—fueled by Hizbollah concerns that the tribunal investigating the 2005 murder of former premier Rafik Hariri will implicate it and its allies Syria and Iran—will dissipate.

"I believe that a political consensus will be reached and the tensions will go away...as they always do," says Saad Azhari, chairman of Blom Bank, arguing that none of Lebanon's main political groupings has any interest in a resumption of violence or disorder.

Certainly Saad Hariri has been suggesting that it should be business as usual until the tribunal reports. However in early October events took a darker turn as Hizbollah called for an end to public funding for the tribunal, arguing it was an Israeli front, while Damascus issued arrest warrants for many of Saad Hariri's closest allies. Long-term observers of Lebanon's political system admit the outlook isn't favorable. "The country is in crisis, and relations with Syria are currently going the wrong way, but this is all purely political," says Nadim Shehadi, a Lebanon specialist for London's Royal Institute for International Affairs. He summarizes Hariri's attitude to his political opponents as: "Look, we know we can never agree, but let's not let that get in the way of creating a good economy."

Certainly, investors haven't been deterred, recognizing not only that the financial system and currency emerged unscathed from the global crisis but that Dubai's recent troubles have benefited Beirut, with many Lebanese expatriates returning home—with their cash.

As a result, Beirut seems like a boomtown, with land prices in the most desirable areas more than double what they were five years ago, while rents continue to rise. A recent survey by international property consultants Cushman and Wakefield found not only that Beirut had the most expensive housing in the Middle East but was the 30th-most-expensive city in the world, up 13 places from 2008. Development is proceeding so fast—led by the late Rafik Hariri's company Solidere (one of the best performers on the Beirut Stock Exchange)—that there are fears for what remains of the city's historic heritage, already devastated by the 1975–'90 civil war. Although the government has set up a hotline for residents to report threatened buildings, most realize the authorities' powers are no match for the deep pockets of the developers.

"Beirut is absolutely key to the Lebanese economy, and the potential now is huge—think London before Mrs Thatcher and the Big Bang. As long as politics doesn't get in the way—a big if—the opportunities for investors could be enormous," says Shehadi.

"The banking sector remains the backbone of the Lebanese economy and ended 2009 profitable, highly liquid and well capitalized, unlike most banking sectors. Bank assets were equivalent to 330% and deposits equivalent to 270% of GDP at the end of 2009, among the highest such ratios in the world," argues Nassib Ghobril, chief economist at Byblos Bank, stressing how much the downturn has benefited Lebanon. "We have seen a massive and unprecedented inflow of deposits due to the increase in confidence in the sector."

With more than 50 banks for a population of just over four million, some consolidation is eventually inevitable, although ratings agencies remain satisfied with the start of the industry. Fitch recently concluded that banks remain "tightly regulated and accustomed to a volatile operating environment."

Yet there is a strong sense within the banking community that the sector hasn't really begin to fully exploit opportunities, given the strong economy, the return of much of Lebanon's diaspora and the country's relative political stability. The opportunities they're focused on are in growing areas such as Islamic finance, wealth and investment management and online banking, which would be helped by the already high levels of IT penetration in Lebanon. Lebanon's banks have also been branching out into the Middle East, although their relatively small size has constrained the extent to which this is feasible.

For banks and companies the focus will continue to be Lebanon itself, where prospects remain encouraging. Between 1999 and 2009, Lebanon received about $26 billion in foreign direct investment, with $3.6 billion and $4.8 in 2008 and 2009 respectively, and more again expected for 2010. Although some 71% of total FDI is currently of Arab origin, this may change. In August the government passed new legislation to enable foreign companies to explore the major offshore hydrocarbon deposits. Although the first licensing round will probably not take place until late 2011 or early 2012, this is a major first step toward Lebanon's developing its hitherto neglected energy sector. Western oil majors have already expressed interest. Particularly encouraging is that Beirut will follow Norway in establishing a special fund for monies earned from its energy reserves.

Yet on top of easing tensions within Lebanon and among its neighbors—which remains key to preserving Lebanon's long-term economic health—the government faces considerable challenges going into 2011.

The biggest, as ever, remains Lebanon's external debt. Although the debt-to-GDP ratio has declined over 2010 to around 131% against the previous 147%, and 2010 public debt will be "just" $51.4 billion against the initial projection of $55 billion, public indebtedness remains a concern. This is especially so because Lebanon has serviced its debts through economic growth and, largely owing to a lack of political will, there have been no fundamental reforms to reduce its continued recurrence.

Absolutely key is the reform of the grossly inefficient national electricity company Electricité du Liban, which currently absorbs some $2.5 billion of public money a year, with observers suggesting continued nonreform of this body costs Lebanon the equivalent of 2% GDP growth a year. The government recently announced another reform package, but past failures to tackle EDL do not bode well for future efforts.

That isn't all. Roads, the water system, bridges, indeed almost every form of infrastructure, as well as the tax collection system and the overall business climate, are crying out for reform. "The government really must try to break the logjam, but if relatively simple things like issuing mobile phone licenses get held up by political factors, how can you seriously expect more far-reaching structural reforms?" asks David Butter, Lebanon analyst at the London-based Economist Intelligence Unit.

Yet if the reforms don't take place, not only will the considerable gap between private affluence and public squalor widen further, but there will be a major impact on Lebanon's long-term growth outlook. A recent survey by Institute of International Finance echoed this, arguing that the "current rapid growth, low interest rates and abundant liquidity in the Lebanese bank system is unlikely to persist over the medium term."

As if this weren't enough, the government also needs to make the business climate more transparent and user-friendly. "Challenging reforms are needed to nurture competitive industries away from real estate and tourism. Success depends on how deep the political consensus is regarding the priority of these challenges," says Azhari.

The latest IMF survey on Lebanon makes plain the challenge. Growth is projected to start declining, with GDP growing just 5% next year and 4.5% in 2012, raising real questions about Lebanon's debt management capability.

But to quote Churchill again, "Difficulties mastered are opportunities won." Assuming a start is made tackling the reform of EDL and in other key reforms, prospects look encouraging, and Lebanon could become a springboard for investors looking to access the largely untapped Syrian market, which now looks more enticing following economic reforms initiated by Damascus.

However Lebanon's promise will continue to be overshadowed by fears about domestic politics and the big unknown—the impact of regional developments. Lebanon and its investors must hope the robust economy and banking system can remain, as Churchill might have said, enigmatically immune to bad news and unsettling developments.