Trade between emerging market countries is driving a campaign for a new currency order. 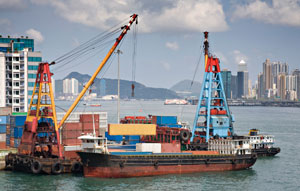 The Bric countries—Brazil, Russia, India and China—have a combined gross domestic product that is greater than that of the US and is growing at a much faster rate. China surpassed Japan this summer as the world's second largest economy, and trade between the big emerging markets is growing rapidly too. The vast bulk of that trade, however, is still conducted in dollars. With that in mind, at the second Bric summit earlier this year the four biggest emerging economies agreed to study ways to use their currencies, instead of the dollar, in cross-border trade.

The front-runner slowly emerging as a potential replacement for the dollar is China's renminbi currency. Ironically, the US and other countries are encouraging this development by putting pressure on China to float the renminbi and make it freely convertible. By abandoning its controlled exchange rate, China would be in a position to oversee the creation of a Bric bloc.

China, the world's largest holder of dollar-denominated financial assets, is concerned about the inflationary risk of the US Federal Reserve printing dollars. The Bric countries as a group hold 40% of the world's currency reserves, which are denominated mainly in dollars.

"The pace of renminbi internationalization will be faster than many expected," says Qu Hongbin, co-head of Asian economics research at HSBC. "The process has been evolving from trade to investment, and from inward to outward investment."

The Shanghai municipal government recently published a circular on promoting renminbi settlement, not only for trade but also in capital accounts. By encouraging wider renminbi settlement business, from cross-border trade to overseas renminbi direct investment and project finance, Shanghai wants to further sharpen its competitiveness to become an international financial center, Hongbin says. Shanghai was one of the first five Chinese cities allowed to participate in the pilot program of renminbi cross-border trade settlement in July 2009, and it now accounts for about half of the national total.

In June of this year, the renminbi trade-settlement program was expanded to 20 Chinese provinces and their cross-border trade with all countries. "Get ready for more initiatives to expand the renminbi's role and a related chain reaction in capital accounts," Hongbin says. This implies more renminbi supply offshore, matching the growing demand for renminbi offshore. Meanwhile, Beijing has been encouraging state-owned enterprises to go abroad and further increase overseas direct investment, Hongbin says.

HSBC Bank USA in September completed its first US cross-border renminbi trade settlement transaction for New York–based Prime Time Fashions. "With our colleagues in China forecasting that nearly half of China's imports and exports will be settled in renminbi in the next three to five years, it is important that we bring such foreign exchange capabilities to our US clients doing business in or looking to tap opportunities in China," says Dan Silber, HSBC's deputy head of global markets and head of foreign exchange and metals for the Americas.

Out of the Shadows
The People's Bank of China in August gave the go-ahead for central banks and trade-clearance banks to invest in China's interbank bond market. The creation of deeper debt markets is another precondition for the eventual emergence of the renminbi as a reserve currency. ICAP and Thomson Reuters last month began allowing the renminbi to trade on their electronic-trading platforms.

Meanwhile, France and China have been holding talks for the past year as part of an effort by Paris to heighten coordination of exchange rates to promote stability of the international monetary system. China and the other Bric countries are seeking a greater role in the International Monetary Fund and the World Bank, as well as in the United Nations. There could be a deal in the making that would involve emerging market countries' offering to increase their currency flexibility in return for greater voting rights, according to analysts at Barclays Capital. France takes over the presidency of the Group of 20 countries this month.

There is a growing sense that the conviction that countries should not actively manage their currencies is eroding, on the back of intervention by developed countries, such as Switzerland and Japan, and quantitative easing by countries such as the UK and the US, not to mention continued heavy management of currencies by countries in East Asia, says Aroop Chatterjee, a foreign exchange strategist at Barclays Capital, based in New York.

A joint approach, along the lines that France is proposing, could be aimed at heading off competitive devaluations, Chatterjee says. "Politically, the G20 is a brand new vehicle, and many hands are competing to steer it," he says. The absence from the France-China discussions of the US—the primary actor in the much-maligned international system—means that the talks between China and France are in their infant state, he adds.

Diversification Is the Key
Yu Yongding, an adviser to the People's Bank of China, says the US debt is rising at a pace that seems out of control. "Such a huge amount of debt is terrible, and the situation will be worsening day by day," Yu said in a speech in Singapore in late September. "I think we are one step nearer to a US dollar crisis," he added.

Dennis Gartman, editor and publisher of the Gartman Letter advisory service, based in Virginia, says China has cut its holdings of dollar-denominated debt in the past 14 months, and Yu has led the argument that China's central bank should continue to diversify its assets away from the dollar. "We are witnessing a wholesale assault upon the Obama administration's spending policies, and until foreign investors are convinced that the US fiscal policies and circumstances are turned in the direction of fiscal austerity rather than fiscal idiocy, we fear that the assault will continue," Gartman says.
"The Chinese have a massive, frightening exposure to the dollar, as well as to the [US] bond market itself," Gartman says. "China's fears are reasonable." China's intention is to freely float its currency, but it will do so on its own terms, not on terms dictated by outsiders, Gartman says.

In the communiqué following their summit in Brasília in April, the Bric countries said: "We believe that the world needs today a reformed and more stable financial architecture that will make the global economy less prone, and more resilient, to future crises, and that there is a greater need for a more stable, predictable and diversified international monetary system." The Bric countries said the G20 should be proactive and formulate a coherent strategy for the post-crisis period. "We stand ready to make a joint contribution to this effort," they added.

Meanwhile, major banks in North America and Europe have already discovered the appeal of a Bric currency basket. They are issuing structured notes that pay no interest, but which offer a return linked to the performance of an equally weighted investment in the Brazilian real, the Russian ruble, the Indian rupee and the renminbi, based on the exchange rate for each underlying currency.

The market for structured notes has come back strongly after slumping with the bankruptcy of Lehman Brothers, when investors discovered that the guarantee of 100% principal protection was only as good as the institution that backed it.

Investors, in effect, are buying a call option on the performance of the Bric currency basket under the guise of unsecured debt securities. Principal-protected notes serve as a cheap source of funding because they pay a return only if the underlying investment performs the way the investor anticipates. If the currencies of the Bric bloc do successfully challenge the dollar's dominance of global trade, it is likely that those investments will indeed perform as their investors hope.