The Benefits Of Discipline

Turkey's central bank governor talks to Anita Hawser about inflation, Europe and how his country managed to weather the recent global crisis so well. 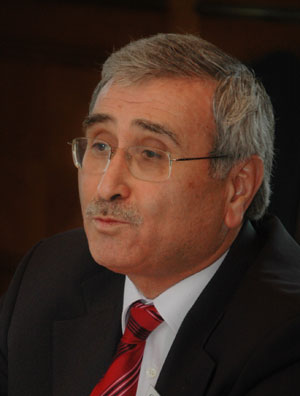 The Central Bank of Turkey has a long history of battling inflation. Almost a decade ago annual inflation was at double digits, and high levels of public borrowing precipitated a financial crisis in 2001, which saw the economy contract sharply. Fast-forward to the 2008 financial crisis: Turkey was one of the first countries to emerge from the global recession with relatively intact domestic demand and a strong, well-capitalized banking sector. Durmus Yilmaz, the governor of the Central Bank of Turkey, talks to Global Finance about the reasons behind the Turkish economy's strong rebound, the resilience of Turkey's banking sector and why, despite a successful track record in battling inflation, he believes there is still some way to go before Turkey achieves price stability.

Global Finance: The Central Bank of Turkey has a long history of battling inflation. Does inflation remain your main concern as central bank governor?
Durmus Yilmaz: Inflation fell from double digits to single figures eight years ago. However, at the central bank we feel there is a long way to go before prices stabilize. We put in place anti-inflationary measures after the 2001 crisis in Turkey, but we have not achieved price stability yet.

GF: Does that mean further easing of interest rates is unlikely in the short term?
DY: There is still room to maneuver in terms of the way we use interest rates for achieving inflation targets. But I am not inclined to say whether we will increase or decrease the policy rate. We will continue to look at the economic data and see what it tells us about short-term and medium-to-long-term inflation dynamics. Headline inflation is 8.4%, mostly due to the rapid rise in food prices, whereas the central bank's inflation target is 6.5%. Core inflation, on the other hand, is around 3%. We communicated to the market that inflation would increase in August and September due to base effects, and it did increase. However, from the beginning of the last quarter of this year, we expect inflation to decrease. So probably by the end of the first quarter of 2011, headline inflation is likely to be below our target for 2011.

GF: Can the central bank do more to stabilize the exchange rate as Turkish exporters have been complaining that a strong lira is harming exports?
DY: The exchange rate is not a policy instrument. The exchange rate is market-determined. At the moment, depending on the international financial flows, as is the experience of other emerging economies, there is an increase in capital flows coming into Turkey, which is putting pressure on the FX rates. Exporters are extremely anxious about this issue. Looking at it from a financial point of view, however, the concern I have is for financial stability, and we will do what is necessary for the orderly functioning of the financial markets.

GF: What are your plans for withdrawing the stimulus measures you provided at the height of the financial crisis?
DY: During the recent financial crisis we reduced the FX reserve requirement ratio, resumed our intermediary role in the interbank FX market to address counterparty risk and provided FX liquidity to the banks. The banks, however, did not need to use the increased central bank funding. For domestic currency liquidity we reduced the TRY[Turkish lira] reserve requirement ratio by one percentage point (injecting 3 billion Turkish lira into the market). We also initiated a front-loaded rate cut cycle and reduced the policy rate by 1,025 basis points. All of this helped the financial markets recover. Credit provision in the market was at an acceptable level for us. We kept domestic demand under control and in line with inflation. From April 14 this year, we started to withdraw some of the stimulus measures we introduced during the crisis. During the crisis we extended the repo facilities from overnight to a week, then three months. We still have one-week repo facilities, but one month has been reduced. Over time we will reduce the CBT [Central Bank of Turkey] borrowing rate in order to encourage banks not to park their extra liquidity at the CBT and use available resources more efficiently. Our aim is to make the system more efficient and to encourage banks to use the interbank market.

GF : Why did the Turkish economy rebound more quickly from the recent global economic recession than other countries?
DY : It is down to the strength and resilience of the Turkish banking system during the crisis. We did not make any changes to the existing rules for banks. The capital ratio of banks in Turkey is close to 20%, their liquidity ratio is well above the required limits, and their asset quality is very strong. In short, Turkish banks are resilient and have the ability to extend credit. The Turkish economy also rebounded more quickly because our level of indebtedness was much lower than [that of]other countries like [those of] Eastern Europe and the US. Household savings as a percentage of GDP is around 12%, and firms have the ability to borrow. The reduction in the policy interest rate by 1,025 basis points within one year also helped the recovery in domestic demand. Domestic demand in Turkey is still very high, and we predict that economic growth for Turkey will be 7% in 2011. However, the economic recovery is not complete without a rebound in investment demand, and while there has been some material improvement in that area, it is still below pre-crisis levels.

GF : Is the global recovery still fragile?
DY : If you look at the level of indebtedness of European consumers, economic stability is a concern. We have to be very cautious. However, the probability of a double-dip recession occurring is less than of it not occurring. Emerging market economies have higher growth potential than European economies, which puts pressure on holders of capital. There is a rising concern, not just for Turkey, but for all emerging markets, that we have to be careful about capital controls.

GF: Given the recent capital measures announced under Basel III, are global financial regulators correct in thinking that another crisis is preventable?
DY: The recent financial crisis taught everyone, including Turkey, that we need to have a better knowledge of the financial system and how it works. But while the Basel III rules are a welcome measure, this does not mean that the financial community will be able to prevent a future crisis. Basel III is much better than doing nothing, and there will be increased regulation and supervision of the financial system. I have no concerns about the ability of Turkish banks to meet the new capital adequacy requirements under Basel III. Turkey learned from the 2001 crisis, which was the result of fiscal indiscipline. Following the crisis, Turkey put in place fiscal discipline aiming to achieve a primary surplus of 5%, which was necessary to achieve growth of 6% on average. That is a valuable lesson that other countries should consider.

GF: Are Turkey's economic fortunes still tied to the EU, particularly given that there is increasing trade between Turkey and the Middle East?
DY: Turkey's major trading partners are in the eurozone. Fifty-six percent of our exports [were going] to the EU, but that has come down to 40% as Turkish exporters have made efforts to diversify their export base, so more is being exported to the Middle East. Turkish exports to these markets have increased by 200% to 300% due to the low base effect.

GF: Is EU accession still important to Turkey?
DY: EU accession is still important. We don't know when it is likely to happen, but that doesn't matter, as long as the Turkish authorities and economic managers continue to reform the economy and implement measures that will make the Turkish economy competitive and resilient. The EU is really an important anchor for Turkey. What we should do is to reform ourselves.