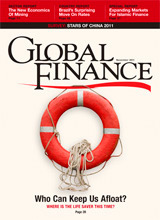 The sovereign debt crisis in Europe and economic slowdown in other developed countries have forced dramatic fiscal and economic measures and several increasingly harsh rescue plans in countries around Europe. It is also fostering new interaction between the emerging markets and developed economies. One of the chosen channels could be the IMF, and steps towards that are under way, with additional financial support by the strongest emerging economies to the euro area being provided via that multilateral institution. This would increase the role and the power of the IMF and avoid for now direct investments of emerging countries in Europe in support of specific economies. Meanwhile the US is still dealing with its own economic slowdown and political stalemate. The ongoing crisis, with all its dramatic consequences, might finally force more unity on a global level. And this will clearly and finally show to all skeptics the interdependence of all economies.