Even as yields on US government bonds fell to record lows on safe-haven demand in September, investors passed up the much higher yields available on lower-rated corporate bonds, as worries about a potential default by Greece washed ashore in the US credit market. The result was a sharp drop in prices of outstanding less-than-investment-grade corporate bonds and a sudden contraction in new issues coming to market.

Uncertainty about how the debt crises in peripheral European nations would be resolved virtually shut down new-issuance activity in the US high-yield bond market in August. There was a modest recovery in September, but the total of $6.4 billion of new high-yield corporate bonds in the month was still far below the $38.1 billion peak for the year-to-date, which was set in May, according to KDP Investment Advisors, based in Montpelier, Vermont.

As dealers reduced their risk by limiting the number of speculative-grade bonds on their balance sheets, liquidity in the market dried up. High-yield bonds fell 7.5% in August and September, which was the biggest two-month loss since October and November 2008, according to Bank of America Merrill Lynch. The spread of high-yield corporate bonds to treasuries was 900 basis points in early October, near where it was when Lehman Brothers collapsed.

Treasury bond prices fell slightly on news that the US economy had added 103,000 nonfarm jobs in September, reducing fears of a recession, although the unemployment rate remained stuck at 9.1%. The Federal Reserve’s $400 billion purchases under Operation Twist are helping to keep long-term treasury yields from rising.

The Fed’s Open Market Committee said, following its meeting in September, that “there are significant downside risks to the economic outlook, including strains in global financial markets.” The FOMC repeated that it would keep the benchmark federal funds rate low until 2013.

Uncertainty about funding for Greece, as well as impatience with the lack of a solution to the broader EU peripheral sovereign crisis and worries about the health of European banks, could weigh on the credit markets for some time, according to analysts at Barclays Capital in London. While there have been hints of progress in Europe, volatility should persist, they said in a recent report. 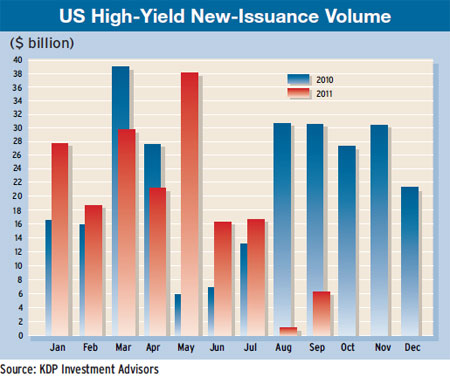 Going to the Brink

“With systemic risk a clear key issue in the near term, we believe high-yield investors would be well served by paying some premium for downside risk protection,” Barclays Capital says. “Despite the draconian sentiment in the market, we are inclined to believe that regulators will continue to follow the blueprint that they have used throughout the crisis, which is to allow events to move to the brink and then to step in as necessary to bring at least temporary stability.”

In the US high-yield market, Elmwood, New Jersey–based Sealed Air, which makes food-packaging materials and systems, braved the turmoil to issue $1.5 billion of senior notes in a two-part offering, comprising $750 million each of eight-year and 10-year maturities. Sealed Air plans to use the proceeds to finance a portion of its acquisition of Diversey Holdings, a Wisconsin company that serves the global cleaning and sanitation market.