The global pipeline of planned initial public offerings has grown to record proportions, with 332 companies waiting to issue IPOs valued at a total of $183 billion, according to Renaissance Capital, based in Greenwich, Connecticut.

FTSE Group and Renaissance Capital have expanded the index series to include IPOs listed in 53 new country and regional indexes. This will enable investors to capture the performance of newly issued equities worldwide. The indexes include IPOs at the end of their first trading day and follow them for about two years until they become seasoned equities.

“The expansion of capital markets globally and the evolution of significant companies in emerging markets necessitate a global approach to IPO investing,” says Kathleen Shelton Smith, founder and principal of Renaissance Capital.

Through the end of September, $114 billion of IPOs had priced year to date, a decline of 8% from the same period a year earlier. The market has dried up since August, however, and the full-year 2011 total will likely be down about 40% from last year, Smith says.

Despite the recent market volatility, which caused some IPOs to be postponed, the pipeline includes such companies as Facebook, Manchester United and Zynga, a social network game developer.

In down markets characterized by low issuance volume, only the strongest and most attractively priced companies are able to go public, and they come to market at attractive valuations, Smith says.

A worsening economic outlook put a damper on the global IPO market in the third quarter and will likely continue to affect deal flow in the near term, as Europe struggles to contain its debt crisis and global growth slows, according to Renaissance Capital. Although investors will undoubtedly raise standards in the coming months in the context of a more fragile economic recovery, this could prove favorable for global IPOs and force only the highest-quality candidates to come to market, the firm says.

The top five companies in the global IPO index are AIA Group (a former member of AIG), General Motors, Dai-ichi Life Insurance, Agricultural Bank of China and Otsuka Holding, a Japanese healthcare provider. The index uses a float-adjusted weighting and includes all investable IPOs in developed and emerging markets with a market capitalization of at least $100 million.

Although many IPOs were put on hold in the third quarter to wait out the market turbulence, global returns stayed positive due to the strong performance of IPOs in China. The Asia Pacific region accounted for 46% of global proceeds and 58% of the deal total in the third quarter.

The Bolsa de Madrid was the leading exchange in terms of IPO proceeds in the three months ended September 30, with $5.2 billion, thanks to two large IPOs from Spanish banks Bankia and Banca Civica. The Shenzhen Stock Exchange was second, with $2.9 billion of proceeds, followed by the Shanghai Stock Exchange, with $2.4 billion.

Only 18 companies went public in the US in the third quarter, a 45% decrease in issuance from a year earlier. Fourteen of the 18 US issues were completed in July, before volatile markets forced the IPO window to close in early August.

In Hong Kong, the world’s largest IPO market for the past two years, deals totaling $4.5 billion were pulled in the last week of September alone. Most of the deals that did come to market declined in their trading debuts. 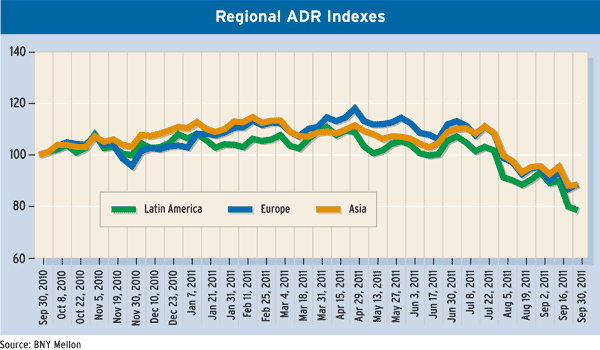