The dollar rose to an eight-month high against the euro in early October, as a further delay of Greek aid and concerns about the health of Europe’s banks gave the greenback an edge in the battle of the least ugly currencies. 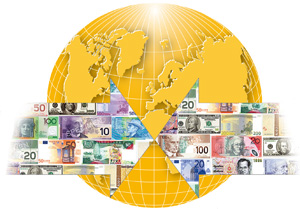 Finance ministers from the Euro Group, the 17 countries using the euro as their common currency, met in Luxembourg last month after it became apparent that Greece would miss fiscal targets set as conditions for receiving additional aid from the European Union and the International Monetary Fund. Troika officials from the EU, European Central Bank, and the IMF postponed for the second time the decision on the next tranche of Greek aid under the 2010 agreement.

“While this seems to be tempting the fates and fanning fears of a default, it does not appear that Greece needs the money until the middle of November, the next time frame [deadline] for the troika’s decision,” says Marc Chandler, global head of currency strategy at Brown Brothers Harriman in New York. “The postponement is probably best understood as part of the brinkmanship tactics that maximize the concessions from Greece.”

Italy and Spain appear to be lagging behind their historical pace of funding their respective deficits, Chandler says. Spain recently postponed the sale of its state lottery, and there is much skepticism in the market about how much money can be realistically raised through privatizations, not only in Spain but also in Greece and throughout the eurozone, he says.

“Our base case remains that Greece will get the next tranche of aid,” Chandler says. “While more austerity from Greece will be demanded and more vigorous implementation of what they have already agreed to is essential, the troika need to accept that their growth forecasts for Greece were overly optimistic, and these need to be adjusted as well for a more realistic assessment of the key metric, which is debt-to-GDP.”

The Euro Group meeting came and went without providing any clarity about how to reduce tensions in the eurozone debt market, Chandler says. In fact, the meeting may have created more uncertainty by delaying the final decision on Greek aid and by suggesting that investors in Greek debt will have to take more severe haircuts and swallow larger losses than previously expected.

The euro recovered briefly after Federal Reserve chairman Ben Bernanke said he is ready to take additional steps to boost the US economy if necessary, although a third round of quantitative easing is not anticipated. Bernanke told the Joint Economic Committee of Congress that the Fed “will continue to monitor economic developments and is prepared to take further action as appropriate to promote a stronger economic recovery in a context of price stability.”

At its meeting in September, the Fed announced “Operation Twist,” which would not expand its balance sheet but would extend the maturity of its holdings. Bernanke said the move could help somewhat to push long-term rates down.

The euro was also supported by comments from EU commissioner Olli Rehn, who said that euro area finance ministers “now have a shared view and sense of urgency regarding the EU’s economic situation.” While this seemed to some like a statement of the obvious, Paul Bregg, foreign exchange trader at Western Union Business Solutions, said the markets were hungry for some sort of sign that EU finance ministers were taking their banks’ precarious capital positions seriously.

All Talk, No Action

This led to suspicions that the EU was considering a massive bank capitalization scheme, Bregg says. “The EU should probably take a look at its past record in regards to trying to talk the markets down with words and no credible plans,” he says. “It should realize that now is not the time—nor were the last 10 times.”

The IMF issued a statement saying it was willing to invest alongside the European Financial Stability Fund (EFSF) to recapitalize Europe’s banks, buy debt of the troubled peripheral countries and participate in Greece’s second bailout. “The IMF is attempting to coax the euro area into coming up with a coordinated and credible response to this ever-increasing debt threat,” Bregg says.

While details were scant on any EU plan to support its banks, many European banks are systemically important, says Sara Yates, a strategist in Barclays Capital’s London-based foreign exchange research group. “Further stress on banks would impose substantial credit constraints on the economy, as well as amplify the spiral between higher yields and rising debt-to-GDP ratios,” she says.

Coordinated moves to shore up European banks would be a crucial step in limiting the contagion from a potentially harder Greek default than the market expects, Yates says. However, experience shows that European political decisions are rarely quick or smooth, she adds.

“Bank recapitalization is a necessary but not sufficient condition to break the current debt dynamics,” Yates says. “We believe further progress on the EFSF, Greece and the ECB’s role as part of a coordinated package, is also needed.” She says it is too early for a rally in risky assets to be sustained.

For the recent consolidation in risk appetite to hold and, more importantly, for it to be maintained in coming weeks, market participants need to see a bold policy response from Europe and a continuation of better economic data, according to Chandler of Brown Brothers Harriman. “It appears that the combination of the sharp deterioration in market sentiment has resulted in a collective resolve to attempt to deal with the euro crisis,” Chandler says. “While these are still early developments and would need to be approved by national governments, a bank recapitalization, along with a more accommodative ECB monetary policy and in time a larger ESFS could be what’s needed to avert another meltdown.”

Meanwhile, with the US national elections a year away, the Congress is looking at a new measure to encourage China to let the renminbi appreciate. “While there is little doubt that the yuan renminbi is undervalued, although reasonable people may differ on the magnitude, politics more than economics appears to be the driving force,” Chandler says.

The most important threat to US prosperity is the deleveraging of the household sector, he says. “The continued depression in the housing market and extreme divergence between wages and salaries, on one hand, and profits on the other hand, are not the result of the misalignment in the currency market,” Chandler says. “However, that message may not resonate with American voters as much as blaming China.”

Market volatility has carried over from the summer months and is expected to prevail through year-end amid the European debt drama, says Michael Woolfolk, managing director and senior currency strategist at BNY Mellon. “The market has already fully discounted a Greek default, which appears to be a growing consensus even among European policymakers,” he says.

Otmar Issing, former chief economist of the ECB, says a default by Greece and its exit from the euro are inevitable in order to prevent contagion to other peripherals. “If so, we have a volatile period ahead of us in foreign exchange, with the euro expected to weaken further before any relief rally is possible on a sustained basis,” Woolfolk says.

At his final ECB press conference on October 6, Jean-Claude Trichet said the bank expects very moderate growth and high uncertainty in coming months. The ECB said it would resume offering unlimited loans of up to one year in maturity to eurozone banks to alleviate a credit crunch. The bank did not reverse policy and cut rates, as many economists had predicted.

Mario Draghi, governor of the Bank of Italy, will take over as ECB president on November 1 amid worries that Europe could fall into recession. Draghi, the first ECB president from a peripheral country, is expected to be cautious about moving toward an accommodative monetary policy in the near term. He likely will want to establish his anti-inflation credentials.

The Bank of England surprised market participants last month by announcing a $115 billion quantitative easing program that was bigger and earlier than anticipated. “Vulnerabilities associated with the indebtedness of some euro-area sovereigns and banks have resulted in severe strains in bank funding markets and financial markets more generally,” BoE governor Mervyn King wrote in a letter to the British Treasury explaining the bank’s action. King said the UK economy is under renewed pressure and that the greater-than-anticipated move was needed to stimulate growth.