The US dollar will remain the world’s reserve currency of choice as long as there is no credible alternative. 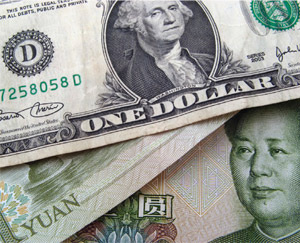 There have long been calls for a new currency to take the place of the US dollar as the world’s reserve currency of choice—in the recent past these calls have been blasted through a bullhorn courtesy of Chinese officials wanting the yuan renminbi to take its place.

Such cries have been made before, and yet nothing has risen to oust the dollar since it first gained prominence as the premier reserve currency after the second world war—with its peg to gold under the Bretton Woods system.

When the dollar weakened in the latter half of the 1970s, similar calls were shouted from the rooftops, but the dollar held sway. Again in the 1990s and early in the new millennium calls were made afresh, but availed little.

Most recently, China has signaled its intent to challenge dollar dominance with the renminbi—which the country indicated is heading for full convertibility. When the US was downgraded by rating agency Standard & Poor’s in August, Xinhua, the Chinese state news agency, was quick to make use of it. The agency said in a statement: “International supervision over the issue of US dollars should be introduced, and a new, stable and secured global reserve currency may also be an option to avert a catastrophe caused by any single country.”

There are many benefits gleaned by reserve currency countries, and none glean more benefits that the US. When the peg was abandoned in 1971 and the dollar retained its reserve currency status—under then-president Richard Nixon—the French finance minister Valéry Giscard d’Estaing coined the term “exorbitant privilege” to describe the unfair playing field between the dollar and other currencies.

Reserve currency countries benefit in a number of ways, including cheap borrowing thanks to high demand for reserve currency government bonds; wide-reaching seigneurage—or the differential between the value of goods purchased with bank notes and the cost of printing and distributing those bank notes; and a less-urgent need to hold high reserves.

But that exorbitant privilege will remain as long as no other currency is considered enough of a bulwark to take its place, and that has yet to happen. Although the renminbi may indeed present a viable alternative at some point, for the foreseeable future the dollar will remain preeminent. The closest rival was the euro, but since the crisis began in the region, euro currency reserve accumulation has been decreasing.

In a recent research report, Aroop Chatterjee, analyst at Barclays Capital, noted that central banks in emerging markets—which account for 71% of total reserve currency accumulation—have been reducing allocation into the euro this year while their dollar allocations have seen little change. There are also changes in how emerging markets central bankers are managing diversification.

“While accumulation of USD remains healthy and unchanged, the GBP and the JPY have been beneficiaries of the slower pace of [euro] accumulation,” he said. Worldwide, dollar accumulation is up: the US currency made up 54% of overall accumulation, up from around 49% since the credit crisis, Chatterjee noted. The IMF’s Currency Composition of Official Foreign Exchange Reserves (COFER)—the data upon which the Barclays research is based—showed slowing reserve accumulation in general going into the second half of the year by the world’s central banks.

Notes Jason Trennert, managing partner and chief investment strategist at Strategas Research Partners: “The US is bailed out by fact that it is a reserve currency. It can get away with a lot of bad behavior.” He says it is the best house in a bad neighborhood. “But that house could wind up on fire, too.” Trennert adds that the US is still the largest fiat currency globally: “But the fact that gold [prices] continue to go up shows there is not a lot of confidence in that fiat currency.”