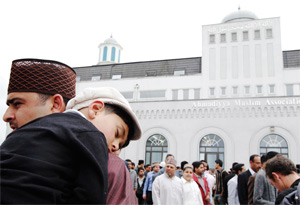 The Islamic finance industry emerged relatively unscathed from the 2008 financial crisis —touting itself as an alternative to the leverage and greed that fuelled the subprime crisis in conventional financial markets. Now in the midst of what looks like another crisis of confidence in global financial markets, practitioners are highlighting its benefits again.

“Islamic finance is a pool of stable capital looking for a home. Every CFO, every government, should look at it as a stable source of liquidity,” stated Afaq Khan, CEO, Islamic Banking, Standard Chartered Saadiq, at SWIFT’s annual Sibos conference in Toronto in mid-September. In a debate entitled Islamic Finance 2.0 Khan and other market luminaries stressed that Islamic liquidity is looking for new markets outside of its traditional centers in the Middle East and Malaysia in order to balance portfolio returns.

According to Ernst & Young’s fifth annual Islamic Funds & Investments Report 2011, one of the three biggest priorities for the Islamic financial services industry is origination and structuring. Islamic fund assets under management increased by 7.6% to $58 billion in 2010, the report says; yet fund managers face “limited availability of quality shariah-compliant assets and fewer products to invest in.” As Islamic funds and investors look for a more diversified pool of investments, traditional financial centers, like London, Hong Kong, Singapore and Luxembourg, appear to be making the right noises, going out of their way to attract investment by changing regulations and taxation rules to create a level playing field for Islamic financial instruments.

BECOMING A HUB FOR ISLAMIC FINANCE

Some financial centers have become an Islamic hub almost by accident, says Mike Rainey, a partner in the Middle East & Islamic finance practice group of law firm King & Spalding. “Shariah-compliant funds tend to go to the same jurisdictions as conventional funds, [those] being jurisdictions that are regulatory friendly and tax efficient—places like Luxembourg, which has a favorable tax environment,” he says. “The Cayman Islands is another good place to set up a shariah-compliant fund.”

As a major global financial center, London has also laid the necessary legal and regulatory groundwork to attract shariah-compliant investment. It made it possible for Islamic banks to establish themselves in the UK and take deposits, and for investors from the Gulf to invest in local real estate projects in a shariah-compliant manner.

In May the UK Islamic Finance Secretariat (UKIFS), which promotes Islamic financial services, was integrated into UK financial services lobby group TheCityUK. In a statement, TheCityUK said it would focus its efforts “on safeguarding and further developing the UK’s strengths in Islamic finance.” According to TheCityUK, there are 22 UK banks offering Islamic finance products, and an aggregate total of 31 sukuk listings on the London Stock Exchange, worth $18 billion. It says Islamic funds managed in the UK have combined assets of $300 million.

London has been a growth market for some time when it comes to Islamic finance. However, Rainey says, one needs to distinguish between those centers that are serious about Islamic financing and those that merely pay lip service to it.

“A lot of financial centers talk about becoming an Islamic financial hub but then run out of puff.” Rainey points to Russia, where, he says, VTB bank talked about issuing a sukuk, but has yet to do so.

The challenge for many companies and sovereigns contemplating a sukuk, says Rainey, is that they have to deal with tax complexity and pricing comparability, and they may not see the need to issue a sukuk if they can borrow more cheaply on the conventional markets.

At the Sibos conference in Toronto, Islamic finance specialists stressed the importance of government sukuk issuance in setting an example, particularly in new growth markets.

Yakub Bobat, global head of HSBC Amanah Commercial Banking, said in other parts of the world there is a need for sovereign Islamic issuance to feed the investor side of the business. He is encouraged by activity in new growth markets such as North Africa and Egypt, but adds that Europe has been slower to develop.

For those countries that are toying with the idea of fostering an Islamic finance industry, what should be their first step? Going back to the Luxembourg example, they should start by creating an infrastructure that—from a taxation standpoint—is receptive to Islamic funds. Luxembourg’s tax structure helped attract outside interest from firms in Malaysia and the Gulf Cooperation Council. Yet, there are examples of new growth markets, like Kazakhstan, where attracting foreign Islamic banks has been more problematic.

On the surface, Kazakhstan appears to have all the right ingredients for Islamic finance to flourish. It has a relatively large Muslim population—approximately 47% of the population, according to the CIA World Factbook—and it changed its taxation and other regulations to encourage Islamic institutions to set up in the country. But Kazakhstan has suffered various setbacks. For example, the central bank temporarily suspended Abu Dhabi’s Al Hilal Bank—the first Islamic institution set up in the country—for not complying with equity capital requirements. This resulted in bad PR, according to an online Islamic finance discussion group.

"Shariah-compliant funds tend to go to the same jurisdictions as conventional funds, [those] that are regulatory friendly and tax efficient"

A Malaysian trustee company is believed to be conducting a feasibility study, in conjunction with a local brokerage and development bank, on setting up operations in Kazakhstan. However, many believe a sovereign sukuk by Kazakhstan should come first to get the ball rolling.

Daud Vicary Abdullah, president and CEO, INCEIF (The International Center for Education in Islamic Finance), speaking at the Sibos conference, noted: “It is not about saying we can’t do anything without changing regulations. It is more about demystifying Islamic finance.”

Some new growth markets are moving more rapidly than others. According to Abdullah, Australia is ahead of Canada when it comes to Islamic finance, despite Canada’s relatively large Muslim population (see sidebar). He says China set up the first Islamic financial institution less than two years ago. “They are doing it because it is good for business, not because there is a Muslim minority—and also because they want to participate in cross-border activity,” Abdullah explains.

Isam Salah, a senior finance partner at King & Spalding and head of the Middle East & Islamic Finance Practice Group, says most Islamic financial transactions that occur in the US are private and not widely publicized. When compared with other growth markets—such as London or Toronto—the US, he says, is neither impeding nor encouraging growth.

Salah says that New York is considering introducing legislation to promote sukuk issuance, but the purpose of the legislation needs to be clarified. “They are looking to copy the UK legislation, but the legislation will need to be tailored to New York State’s needs. You get spurts of activity like that, but I don’t see the US emerging as a major Islamic financing hub.”

Salah believes Canada has a better chance than the US of developing Islamic finance, as the Muslim community there is more cohesive. Rushdi Siddiqui, global head of Islamic Finance, Thomson Reuters, says there are around one million Muslims living in Canada and a number of shariah-compliant companies are listed on the Toronto Stock Exchange.

Jeffrey Graham, a partner with Toronto law firm Borden Ladner Gervais and co-chair of the TFSA’s committee on Islamic financing, says the working group is focused on creating a friendly environment by ensuring that taxation policies and industry regulations treat Islamic financial instruments the same as they treat conventional ones. Although residential mortgages based on the Islamic concept of a diminishing musharakah—where one partner in an agreement gradually buys the share of the other partner in the agreement—already exist in Canada, Graham says for other Islamic financial instruments and a sukuk market to flourish, a level of clarity is needed from a tax standpoint.

“We haven’t made as much progress as we would have liked,” says Graham. “But we are committed to developing a legislative and regulatory framework to facilitate Islamic finance. We have a strong economy and an excellent banking system and no political risk—characteristics that should attract investment from the Gulf countries.”

Graham says Canada wants to provide services to its local Muslim community that address their particular needs, and as a trading nation, it also sees Islamic finance as a means of fostering trade with new markets—such as the GCC countries.