Report And Awards: The Stars Of China

China continues to sidestep major global economic woes, with its growth rate expected to hover close to 10%. However, the country faces its own unique set of challenges in effectively securing continued strength and stability—including a mismatch between local and central government funding expectations. 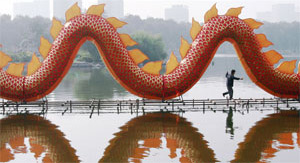 While much of the world hovers on the edge of another recession, China continues to grow. Its economy expanded by 9.6% in the first half of the year and shows only moderate signs of slowing, even as its monetary policy tightens. On the surface, the country seems to have avoided many of the problems faced by Western countries. A closer look, though, shows that China’s policymakers are not immune to the challenges faced by their Western counterparts. As with most issues, China’s challenges come with unique characteristics.

China also faces problems related to government debt. The official government figure places public debt at around 19% of the total GDP. Beyond the central government, however, local governments use a variety of less transparent methods to raise money. Only a few cities have implemented pilot property tax programs, and local governments at all levels are prohibited from issuing bonds.

Many of the LGIV-financed projects are for public infrastructure, such as bridges and roads, which will produce little or no income. With real estate markets cooling, local governments have few available avenues for repaying the loans. Many will likely become nonperforming loans. Eventually, the banks, local governments and/or the central government will need to absorb the losses.

Stephen Green, head of Greater China research for Standard Chartered, explains: “The problem is the result of a systematic mismatch between local government spending responsibilities and revenues, unfunded mandates sent down to localities by Beijing, and corruption.” Green and his colleagues estimate that China’s LGIVs currently have RMB 10 to RMB14 trillion ($1.5 to $2.1 trillion) in outstanding loans. They estimate that when these loans are taken into consideration, China’s total public debt amounts to 70% of GDP.

Despite the sizable challenge, Green believes the government can resolve the issue without a major crisis. “Properly handled, the local government debt problem does not have to trigger a banking crisis or economic slowdown. The central government’s balance sheet and tax collection capabilities combined with strong nominal growth should mean this challenge can be met.” Green does, however, think that the government needs to accurately assess the problem and address it promptly.

A second issue facing both Chinese and Western regulators relates to financial complexity and innovation. China’s regulators are tightening monetary policy through a variety of methods. One of the most popular is by raising reserve rates. The government also sets lending quotas and, at times, restricts lending to certain sectors. Finally, the central bank regulates interest rates, setting maximum deposit rates and minimum lending rates. This policy prevents banks from competing too fiercely before their credit evaluation capabilities are mature—but also discourages companies from putting money into deposits because of low returns.

Chinese banks sometimes take advantage of wealth management services, peer-to-peer lending products and other methods to get around these regulations and offer better returns to their depositors. As in more developed markets, regulators are struggling to stay ahead of the financial industry. The IMF’s Global Financial Stability report, released in September, states: “Recent policy tightening has slowed headline loan growth but other forms of credit have surged.”

The increase in other lending sources puts China’s total domestic loans at 173% of GDP at end of June, the IMF estimates. This figure is high for countries at China’s income level, the report notes. Ultimately, though, the IMF does not expect this trend to seriously endanger China’s growth: “One key source of confidence is China’s strong fiscal position, including a large stock of public sector assets and low central debt.”

"Off-balance-sheet lending is not a new issue, though it is probably accentuated because of the government tightening"

“Off-balance-sheet lending is not a new issue, though it is probably accentuated because of the government tightening,” says Joske. “The government is fully aware of it, so I don’t see it leading to any broad financial crisis.”

Finally, as in many Western countries before the financial crisis, China’s real estate market is showing signs of overheating. According to the IMF, property prices in China have officially risen by 60% since the end of 2006. Regulators have tried to cool the market without causing a drastic drop, but tightened monetary policy, higher down payments and general buying restrictions have done little to help. In August new home prices rose in all 70 cities monitored by the Chinese government.

“There is still very widespread but very mild price weakness,” explains the EIU’s Joske. He says price is not the most worrisome figure: “The volume of housing construction has not gone down and that’s where there is a danger.” Joske thinks that this figure will go down once property developers run out of cash reserves. But if not, that overbuilding could eventually drag down the property market.

Jason Bedford, manager at KPMG’s Beijing office, believes real estate risks go beyond their mortgage lending departments. “One systemic risk I see is that all collateral is based on property. Even if prices dropped 30%, the direct risks to the banking sector are not that high because they often overcollateralize loans. But liquidity would be a problem.”

Bedford adds: “The prices aren’t dropping because people are holding on to their houses in the same way you would a brick of gold. If you suddenly added economic distress and some of these people needed to sell their assets, they would become very illiquid.” While reduced liquidity is unlikely to cause a banking crisis, it would force the government to radically adjust its policies and limit its ability to address other problems in the system.

None of these various risks are likely to derail China’s economic growth, but the challenge is for policymakers to clearly acknowledge, clearly evaluate and appropriately respond to these risks. Their success is important both for China and for its developed counterparts, which are increasingly relying on emerging markets for global growth.