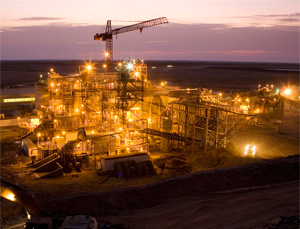 Kinross Gold has sworn off the capital markets for the foreseeable future. The Canadian mining company issued new shares last year to acquire Red Back Mining—which discovered the Tasiast mine in Mauritania with 7.6 million proven ounces of gold—in an all-equity transaction valued at about $7 billion. But when Kinross needed to raise money for capital expenditures, the company went to the public debt market to issue $1 billion in bonds on August 17 this year.

Management was reluctant to go back to the stock market.Kinross’s stock on the NYSE fell by 2.7% between the two deals to $17.59 a share, while the price of gold rose by 6.9% to $1,602.50 a troy ounce over the same period. As long as gold prices remain at historic highs, Kinross will be able to finance operations through cash flows of about $1.5 billion a year from mines that it operates in Chile and Russia, says Paul Barry, an American veteran of the mining industry who became chief financial officer of Kinross in April this year.

“We don’t really need bankers that much right now,” says Barry. “I wonder if they are frustrated. There is not a lot of room for bankers to issue debt and equity.” 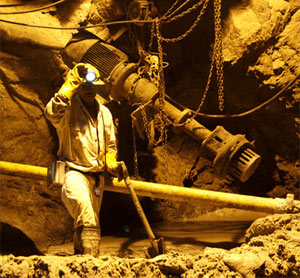 Kinross is just one of many mining companies that are awash in so much cash from unprecedented price increases for precious and base metals over the past two years that they are withdrawing from the capital markets. Prices are being driven to meteoric heights by a decline in confidence in the dollar and the euro as the US and the EU struggle to manage their sovereign debt, and growing investor use of exchange-traded funds that invest in precious metals. Plus, base metals such as iron and copper are increasingly in demand in emerging markets, where economic growth remains strong.

“Mining companies have not financed aggressively this year,” says Egizio Bianchini, vice chairman of BMO Capital Markets. This detour on the road to El Dorado is most visible in the public equity market, where investment banks have been raising less and less capital for mining companies around the world over the past three years. Even commodities derivatives are under threat after two years of rising metals prices. “What that does is reduce the impetus for mining companies to hedge their gold production. You’ve had gold companies unwind their hedge books,” says Rajat Kohli, global head of mining and metals at Standard Bank in Johannesburg.

"Investors have told mining companies: ‘...we do want you to put a little more debt on your balance sheet’"

This reversal of fortunes is forcing investment banks to become more innovative in how they finance mining companies. The banks that have the advantage in this new game are relatively small, less well known ones that have specialized in financing mining companies since they were founded. They are based in countries where mining has been a critical driver of the economy since the 19th century.

Three banks with some of the deepest inroads in the industry are: BMO Capital Markets—whose parent company Bank of Montreal was founded in Quebec in 1817 and is emerging as a major underwriter of private placements, particularly in the Americas; Standard Bank—which was founded in 1862 in South Africa, is 20% owned by Industrial and Commercial Bank of China, and is known for lending to mining companies in Africa; and Macquarie Group—which began in Australia in 1969 and is known for putting its own capital at risk in partnership with small mining companies, particularly in Asia-Pacific.

This year these banks are tapping relationships with emerging mining companies that require capital to develop new mines but have no access to the public debt or equity markets. And they are working more angles than ever.

In a break from tradition, they are encouraging mining companies to take on debt, and they are increasingly underwriting private placements for pension funds. They are also putting their own capital at risk in direct equity investments and revenue-sharing deals. And instead of selling derivatives to mining companies, they are developing new relationships with hedge funds as clients, says Kohli.

As a result, a brisk business is emerging in private placements in emerging mining companies. BMO Capital Markets takes this route when the lengthy paperwork that would be required for regulatory approval on a public equity deal is not complete but still sufficient for a subset of investors who can stomach the risk, according to Bianchini.

In one of the largest such deals on record, BMO Capital Markets and Canaccord Genuity—a Canadian investment bank known for underwriting small public equity deals—underwrote a $550 million private placement for Manabi Holding, a privately owned Brazilian mining company. Manabi used the money to acquire two iron ore mining projects in Brazil earlier this year. One of the investors in Manabi was Korea Investment, a sovereign wealth fund.

Banks that put their own capital at risk in the mining industry have an advantage over their less daring competitors in the current environment. This is still a niche business, but the clear leader is Macquarie, which has dedicated a whole division, called Metals and Energy Capital, to it. The division dispatches veteran geologists to mines to determine the geological risk of financing them. Then the bank acquires minority equity stakes in mining companies, sharing in the profits without the headaches of operating a mine. In some cases the bank purchases metal from a mine long before it is pulled out of the ground and then sells it. In other cases, the bank makes an investment in a mining company in exchange for a percentage of revenues in perpetuity.

In one recent deal, Macquarie bought an equity stake of less than 5% in Carpathian Gold—a mining company with operations in Brazil and Romania, says Chris Adams, executive director of Macquarie Metals and Energy Capital (Canada) in Vancouver. Then the bank signed a gold purchase agreement for $30 million. In addition, the bank lent Carpathian $75 million. And this was all before the company received a permit to start production this summer.

This September, Standard Bank entered into a less-complicated arrangement with African Minerals, a London-listed iron ore mining company in Sierra Leone, for which it recently provided a standby facility of $100 million in exchange for 8 million tons of iron ore. Standard will place the iron ore with Chinese steel mills, says Kohli.

If there is one area of the capital markets that could start growing in the mining industry while metals prices are still high, it’s debt. “Investors have told mining companies: ‘We don’t want you to blow your brains out, but we do want you to put a little more debt on your balance sheet,’” says Bianchini.

With European banks scaling back liquidity provision thanks to the European debt crisis, lenders that have earned a reputation for flexibility have a distinct advantage. Macquarie waived loan covenants for its borrowers in the mining industry during the global financial crisis, which saved many of them from default, says Adams. “A number of companies were thrown under a bus during the credit crunch in late 2008 and early 2009 when copper went from $4.00 a pound to $1.30,” Adams explains.

To hear Bianchini tell it, prices for metals and other mining commodities will have to stand relatively still before mining companies come back to the capital markets.

Gold prices fell 11% in September before continuing their otherwise unyielding two-year climb. Until metals overall stabilize, Bianchini says, the mining industry will continue to finance itself out of public view.