Corporate debt issuance soared and yields on high-yield as well as investment-grade bonds fell to record lows in September after the European Central Bank (ECB) and the US Federal Reserve moved aggressively to inject liquidity into the markets.

The central bank moves were a signal for investors to buy risky assets, according to Larry Kantor, head of research at Barclays. “A modestly growing economy with cyclical sectors operating at low levels and both households and businesses displaying extreme caution is not very vulnerable to a sharp downturn,” Kantor says in the bank’s quarterly global outlook report, subtitled “Don’t Fight the Fed.”

Barclays recommends that investors move out the risk curve within the corporate credit market. “While we do not expect a booming recovery anytime soon, we do expect the recent deceleration in global growth to stabilize over the next few months, and that should be sufficient to take markets up another notch,” Kantor says.

“Policy actions, chiefly from the ECB, have been successful in curtailing tail risks for the euro area: While the crisis will be ongoing, we expect volatility to be more manageable and event risks to be less globally systemic than before,” he says. “Almost across Europe, the weak global outlook will remain a key theme, though, keeping rates low.”

In the US, as in Europe, companies are rushing to lock in low yields. The average yield on Barclays US high-yield bond index fell to a record low 6.2% in late September.

“High-yield origination is at a breakneck speed, but it has been led by better-rated firms within the asset class,” says Ben Garber, economist at Moody’s Capital Markets Research in New York. “In the years to come, this would seem to augur well for low default rates, broad market access for issuers and good returns for bondholders,” he notes.

Limited merger and acquisition activity, in particular the lack of highly leveraged buyout deals, has reduced a source of high-risk bond issuance, according to Garber. Global M&A volumes are down about 20% from last year, and are a fraction of the record $3.1 trillion in the first eight months of 2007, he says. “The LBO subset of M&A activity is also well off its peaks,” Garber notes.

With the fallout from the aggressively leveraged deals of 2006 and 2007 still a factor, M&A activity and the associated low-rated bond issuance will not soon recover to previous highs, he says. “Though interest rates have never been lower, caution is still evident with regard to extending credit to high-risk corporate borrowers,” Garber explains. 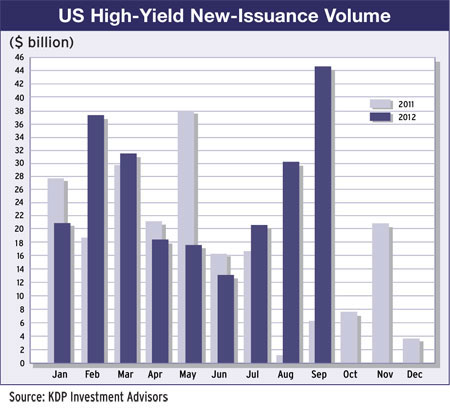