Editor's Letter: Forecasts May Be Down,But Hope Is Rising 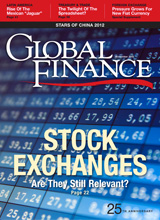 The annual meetings of the IMF and World Bank in Tokyo in October confirmed that the economic slowdown of Europe, and to a lesser extent of Japan and the US, has negatively affected emerging markets growth. The IMF has cut its growth forecast for both advanced and emerging economies, but there are some initial signs of modest optimism compared to last year.

In particular the ECB decision to establish the bond-buying program, OMT (Outright Monetary Transaction), which has not yet been used, has been welcomed by the markets.

Much needs to be done, but the fact that Europe is starting to discuss a possible banking union and US political leaders are increasingly aware of the risks of the impending fiscal cliff are at least the beginning of a possible solution. At the same time regional conflicts, like the one between China and Japan, could affect global trade and worsen the situation. These themes will recur in the coming months.

A WORD FROM THE EDITOR