Editor's Letter: All Eyes On The Big Players 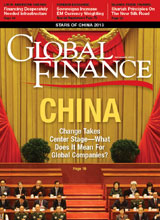 A few months ago nobody would have expected the United States to dominate the recent meeting of the G20 group in Washington and the discussions at the annual assembly of the IMF and the World Bank. And yet it was center stage in most conversations because of the uncertainty of the political stalemate in Congress and the debate on the debt ceiling.

What is more interesting is that this time many finance ministers and central bank governors of emerging countries spoke openly about the risk of spillover from the United States to other economies, and currencies.

In this issue we focus on the largest of the emerging countries, China. China has been a locomotive in world growth, and a large proportion of its reserves are invested in US Treasuries and dollars. Its transition to a consumer economy and its future are clearly of relevance to all.