Led by growth companies in the technology and healthcare sectors, investor returns on initial public offerings were exceptionally strong in the third quarter, particularly in the US markets. Analysts expect the fourth quarter to be active as well, with large IPOs on deck from Britain’s postal service, China’s e-commerce giant Alibaba, and the widely anticipated $1 billion Twitter offering.

“With IPOs generating strong returns, we expect the final quarter of 2013 to be extremely active, led by the US and Europe,” Renaissance Capital says. IPO returns averaged 23.4% globally during the third quarter, led by North America, where IPOs rose by 29.9% on average, the firm says in its latest quarterly review.

In the first three quarters of this year, IPO volume on US stock exchanges has already surpassed the full-year total for 2012, according to PwC.

Neil Dhar, PwC’s US capital markets leader, says: “We’re seeing a very active market for both M&A and capital raising, as financial sponsors evaluate all of their options in monetizing their portfolios, while securing growth opportunities for the future.”

The financial services sector accounted for just 14% of IPO volume in the United States in the third quarter, down from 22% in the second quarter. “The recent increase in interest rates has bolstered investors’ interest in high-growth companies, and demand for IPOs in certain sectors reflected the change in investor sentiment,” Dhar says.

The US IPO market is on track for the busiest year since 2000, according to Renaissance Capital. The third quarter exhibited all the signs of a healthy market, it says. Investors were enthusiastic but selective, growth stocks were well received, venture-backed activity accelerated, and the pipeline continued to build.

Asian IPO volume of $17.9 billion in total proceeds in the first nine months of 2013 was down 37% from the same period a year earlier, Thomson Reuters says. Accounting scandals and lack of transparency have put the damper on IPOs from Chinese companies in the past two years. A successful IPO from Alibaba, China’s largest e-commerce company, could focus attention on China’s fast-growing Internet market. The IPO is expected to value Alibaba at about $75 billion, or slightly more than eBay.

In the depositary receipt market, Mexican discount airline Volaris named BNY Mellon as depository for its ADR program on the New York Stock Exchange. “Volaris’s decision to make its initial public offering on the NYSE is indicative of rising investor confidence in Mexican companies and their outlook on a growing Mexican economy,” says Christopher Kearns, CEO of BNY Mellon’s depositary receipts business.

J.P. Morgan established a sponsored ADR facility in the OTC market for ThromboGenics, a biopharmaceutical company based in Belgium. The bank also was appointed as depository for RSA Insurance Group’s sponsored ADR program. RSA is a UK-based global property and casualty insurer.

Citi introduced a series of unsponsored ADR programs, including three for companies from Japan (Anritsu, Suntory Beverage & Food, and Netcare) and three from Germany (Rational, VIB Vermögen, and Wirecard). 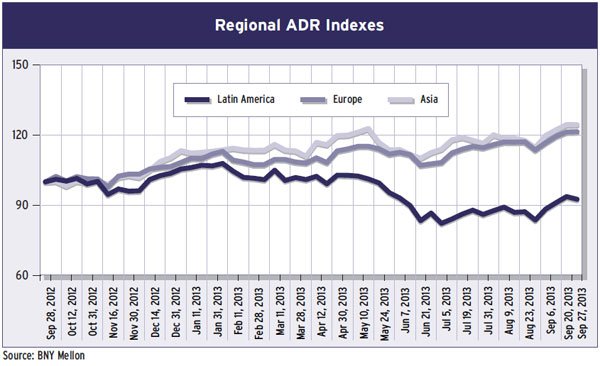