Asian Private Banking: Where The Money Is

Do Asian private banks have the complexity to outshine their Swiss counterparts and attract the vast private wealth reserves growing in the East?

After a formal apology by the Swiss Bankers Association for “wrong conduct” in helping clients cheat tax authorities around the world, Switzerland is preparing a framework of regulations to end its legendary tax secrecy by the beginning of 2014. This historic regulatory development is already sending shock waves through the private banking sector worldwide.

Much of the world’s private banking business will now start to gravitate toward global financial centers within reach of countries where the world’s high-net-worth individuals are clustered—in particular, in emerging markets. Emerging markets accounted for $5 trillion, or 58%, of the total of $8.5 trillion in offshore wealth assets under management worldwide last year, according to a study by Boston Consulting Group. The single largest concentration of those assets—$2.1 trillion—came from the Asia-Pacific region. 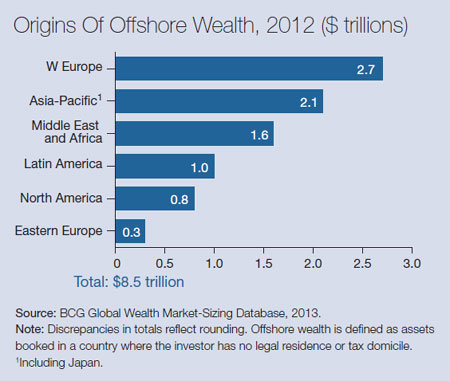 The banks that are best positioned to cater to emerging markets clients migrating away from Switzerland must have substantial operations in Singapore, which has long been considered “a mini-Switzerland for offshore wealth management,” explains a finance industry executive in the Southeast Asian city-state. One of the most aggressive is also one of the smallest: Bank of Singapore, which was formed by the acquisition by Oversea-Chinese Banking Corporation of ING’s private bank for $1.5 billion in 2010.

Since then, its revenue has grown by double digits annually. “Our positive growth in the last couple of years is testimony of the opportunities that abound for Asian-based private banks,” says Renato de Guzman, CEO of Bank of Singapore.

“It’s fair to say that Singapore will be a bigger wealth management hub than Switzerland in three to five years,” says Tim Gibson-Tullberg, managing director of Sheffield Haworth, a London-based executive search firm that specializes in banking, in Singapore. The challenge that even the largest banks in Asia will face in soaking up new assets that are migrating eastward will be to convince multibillionaires that their conservative and often risk-averse commercial banking platforms possess the sophistication for managing the “complex wealth” that Swiss banks are known for.

But even Swiss bankers in Asia may find themselves unprepared for the generational challenge their industry is now facing in Asia. The generation that created much of the region’s vast wealth is now aging, and the Western-educated millennial generation lacks their parents’ experience in preserving it. The older generation of Asian entrepreneurs dealt with Swiss bankers, who were and are familiar with the task of wealth preservation. As their business gets taken out of the hands of Swiss bankers who were experts at what Justin Ong, Asia Pacific leader for PwC in Singapore, calls “the transfer of wealth across generations,” the older generation could discover the hard way that the younger generation has different priorities than its predecessors had. Generational changes are also forcing private bankers to change strategies and product offerings from wealth preservation to wealth creation.

The most successful private bankers in Asia will be those who can bring such expertise to small, so-called frontier markets like Vietnam and Myanmar, where bankers complain about a lack of transparency and no rule of law. As a percentage of assets under management, net new money is expected to have grown by 16% from January 1 to December 31 this year in such newly emerging markets, but only by 10% in established emerging markets—and by an even smaller 8% in traditional mature markets—according to a PwC survey.

No bank in Singapore is eager to admit that it wants to pull in offshore assets from Switzerland. Nevertheless, when the Monetary Authority of Singapore revised its long-standing anti-money-laundering rules in January, the timing was lost on no one. “Any of the regulation that they do is going to be synchronized at a global level,” says Alfred Chan, director for financial institutions at Fitch Ratings in Singapore. No one expects Asian banks to turn down that new business, either.