Corporate Finance : Bond Market’s Sell-off May Not Be Over Yet

The bond market has fallen so far since Friday the 13th of June, that comparisons are being made with the big Bond Market Crash of 1994. The 1994 crash was driven by the same factor that is pushing yields higher in 2003, says Carl B. Weinberg, chief economist at Valhalla, New York-based High Frequency Economics. In both cases, bonds had become expensive, with real yields below 2%.

“History suggests that investors are happy, on average, with real yields around 3%,”Weinberg says. Only in Canada and Australia are yields already 300 basis points over inflation, he says.The other major world bond markets face the potential for much more selling, even after the big rise in yields since June,Weinberg warns.

Bond market volatility is to be expected, given that the economic recovery is at a crucial inflection point, according to Kenneth L. Hackel, chief US fixed-income strategist at Merrill Lynch in New York.

If US economic data remain strong over the next few months, yields on two-year Treasury notes could easily rise to 2.25% or higher, and it would not be a surprise to see 10-year yields rise above 5%, he says.

Despite the recent strong economic reports, talk of the Federal Reserve actually increasing rates in the first half of next year is premature, Hackel says.

“Historically, the Fed has had an extremely patient approach toward beginning a tightening cycle after a recession,” he says.“We think the Fed will want to see at least two successive quarters of sustainable abovetrend growth in the first half of next year, coupled with a marked improvement in labor-market conditions, before contemplating an increase in rates.”

When 10-year US treasury yields fell close to a nominal 3% in June of this year, they were at an artificially low level, analysts say. Remarks by Fed officials had led the market to believe that the central bank was worried enough about the threat of deflation that it would enter the market to buy bonds to drive yields lower. It later became apparent that such an unconventional approach was not going to be used, and bond yields backed up. 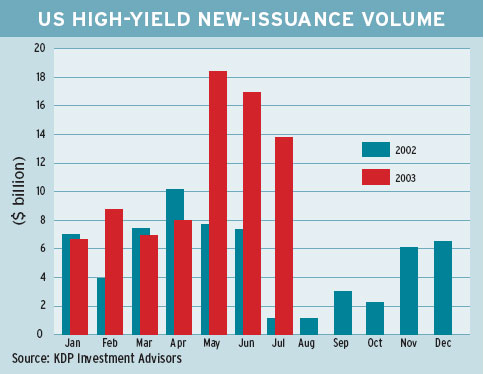 San Jose, California-based Calpine, one of the largest US independent power producers, offered a $3.3 billion package of senior secured notes and term loans in July to refinance outstanding debt.

The $2.55 billion bond portion was the biggest high-yield deal of the year to date. 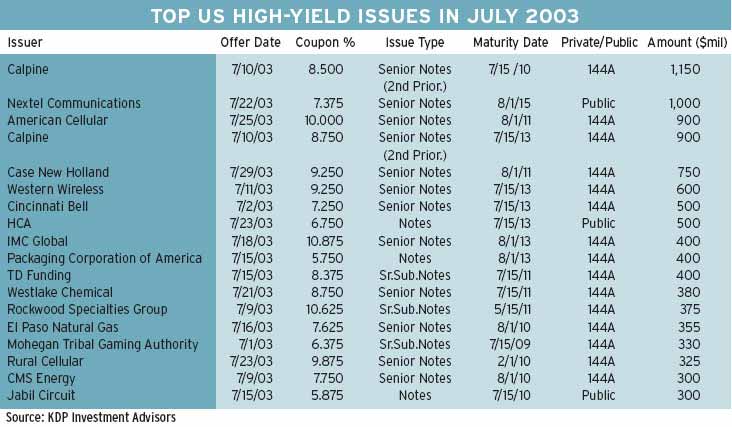